You are here: Australian Herbicide Resistance Initiative › News › New toys for the control of resistant pigweed in the USA
0
0
0
0
May 1, 2017 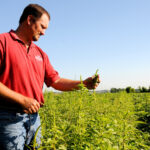 Did you ever receive a present as a child on Christmas Day only to have it broken on Boxing Day? I was devastated when my cousin bit the head off my GI Joe action doll at the family BBQ. I thought Joe would be tougher than that!

The new toys for the control of resistant pigweed in the USA are dicamba and 2,4-D. There are new traits in soybean and cotton in the USA that enable these crops to tolerate dicamba or 2,4-D as well as other herbicides. Monsanto has released the Roundup Ready 2 Xtend® traits in soybean and cotton that includes tolerance to dicamba and glyphosate, and Dow Agro Sciences has released Enlist E3®, a system that includes tolerance by soybean, corn and cotton varieties of a new formulation of 2,4-D as well as glyphosate and glufosinate tolerance.

While it’s fantastic for US grain growers to have new options to help them control glyphosate-resistant palmer amaranth (pigweed), new research by Parsa Tehranchian and Jason Norsworthy from the University of Arkansas and others has found that the toys may break quickly if they’re not treated right. They exposed susceptible pigweed to three consecutive low doses of dicamba and voila, three-fold resistance to dicamba. The dose of dicamba to cause 50% control of pigweed increased from 111 g ai/ha to 309g ai/ha. This selection with dicamba also caused roughly a 2-fold increase in tolerance to 2,4-D as well.

It’s not nice when a new toy breaks in a short space of time, but perhaps if we know that it’s fragile we may treat it with a little more care.

Palmer amaranth or pigweed as it’s commonly known, in the southern states of the USA is probably the world’s biggest weed problem. This is a gigantic plant that can grow 2” (5 cm) a day and set up to 600,000 seeds per plant. For our Australian readers, it’s like wild radish on steroids, growing in beautiful soil with plenty of moisture in summer! 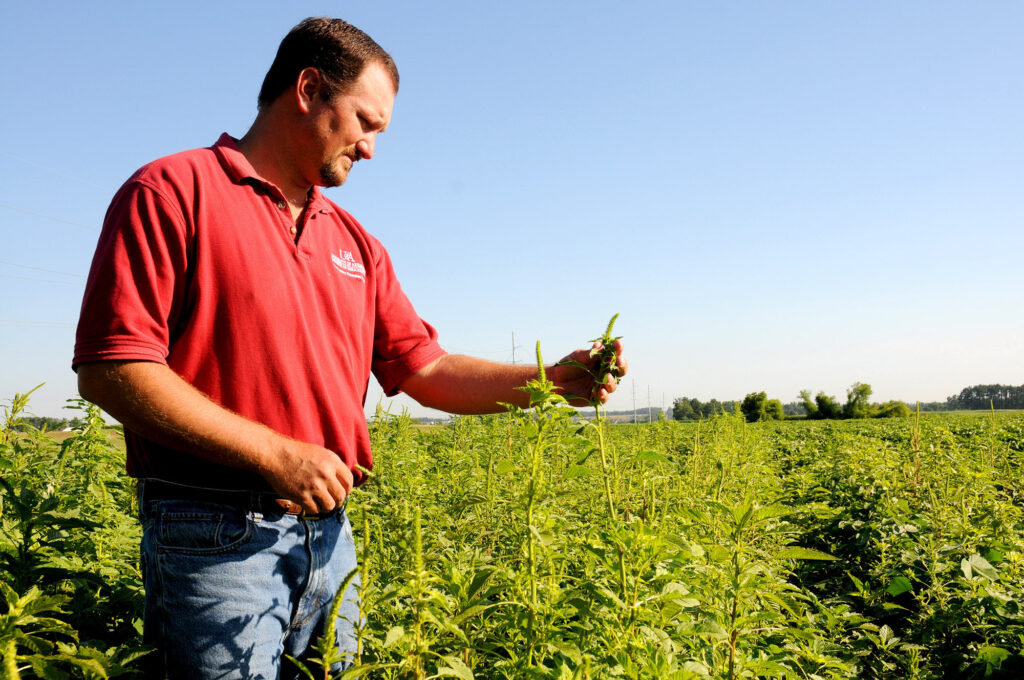 When Roundup Ready® crops were introduced into America the growers adopted this system with gusto, abandoning most other forms of weed control in favour of glyphosate. After about 10 years of this, they had developed the world’s biggest resistance problem with glyphosate-resistant pigweed now dominating the southern states and creeping north. The chemical and breeding companies set about developing new technologies to solve this problem with new genetic traits and new herbicides.

Some of the technologies include…

Discussions between Professor Steve Powles from AHRI and Professor Jason Norsworthy from the University of Arkansas led to this low dose research being undertaken in the USA (we didn’t want to risk introducing pigweed to Australia!). A team led by Jason and Parsa Tehranchian set out to expose susceptible pigweed to low doses of dicamba for three successive generations where surviving weeds were forced to cross-pollinate with one another. We call this an ‘arranged marriage’, or in technical terms, recurrent selection. The initial population was called PO and successive populations named P1, P2 and P3. A full dose of dicamba to control 4 – 5 leaf pigweed is 560gai/ha. In this study, the first generation PO was exposed to ¼ dose, P1 a ½ dose, P2 a ¾ dose and P3 a full dose as per the table below. 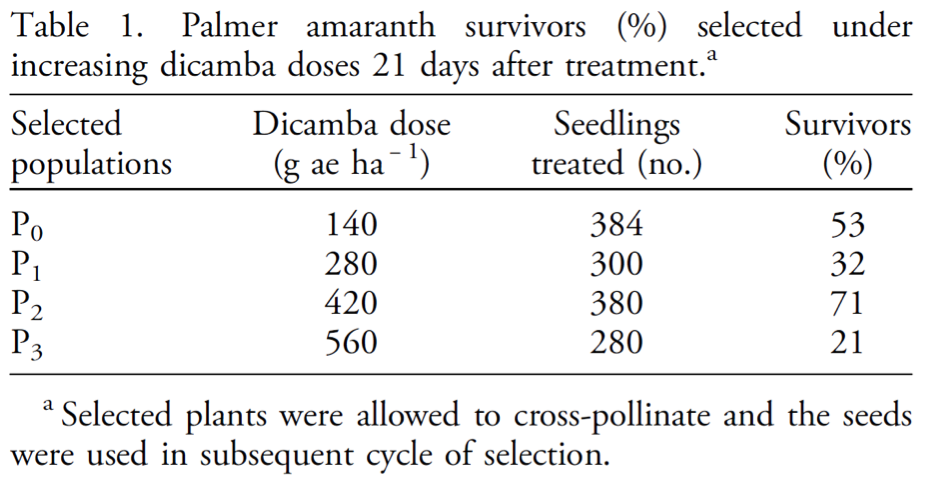 As with several other studies on other weed species, exposing pigweed to three successive low doses of dicamba led to a roughly three-fold increase in resistance as can be seen in the dose-response curve below. Approximately 25% of the P3 generation now survive the label rate of dicamba. 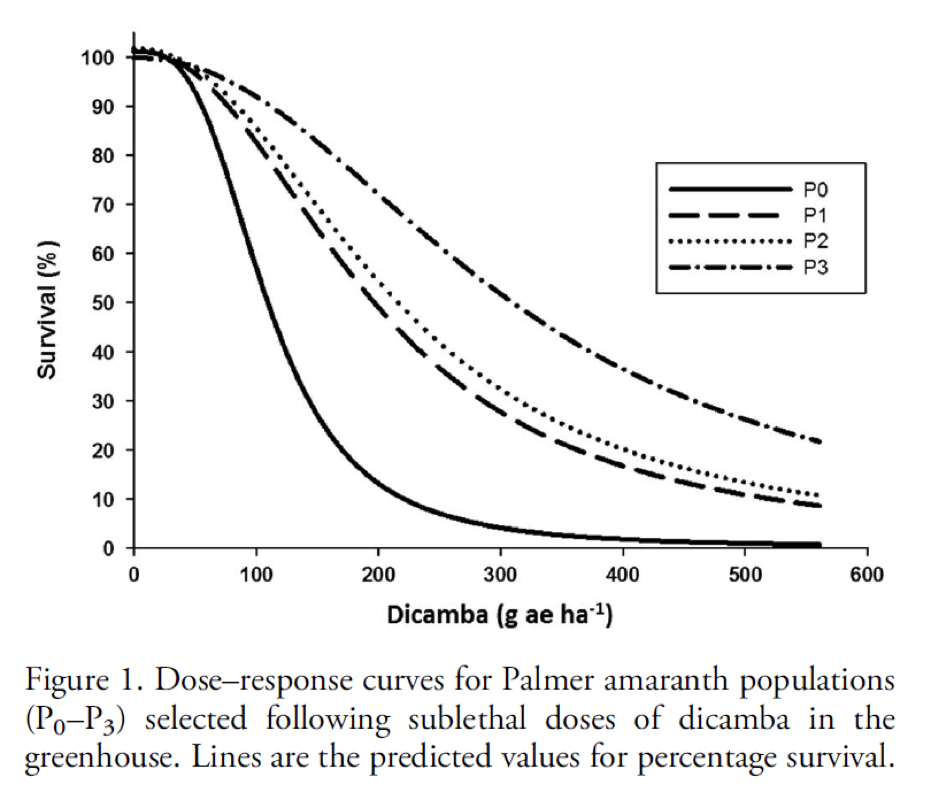 The pigweed selected with dicamba in this study were also tested with 2,4-D, another auxinic herbicide. Approximately 2-fold resistance to 2,4-D was also observed for the P3 generation with 25% of pigweed in the P3 generation surviving a rate of 2,4-D that gave 100% control of the PO population. 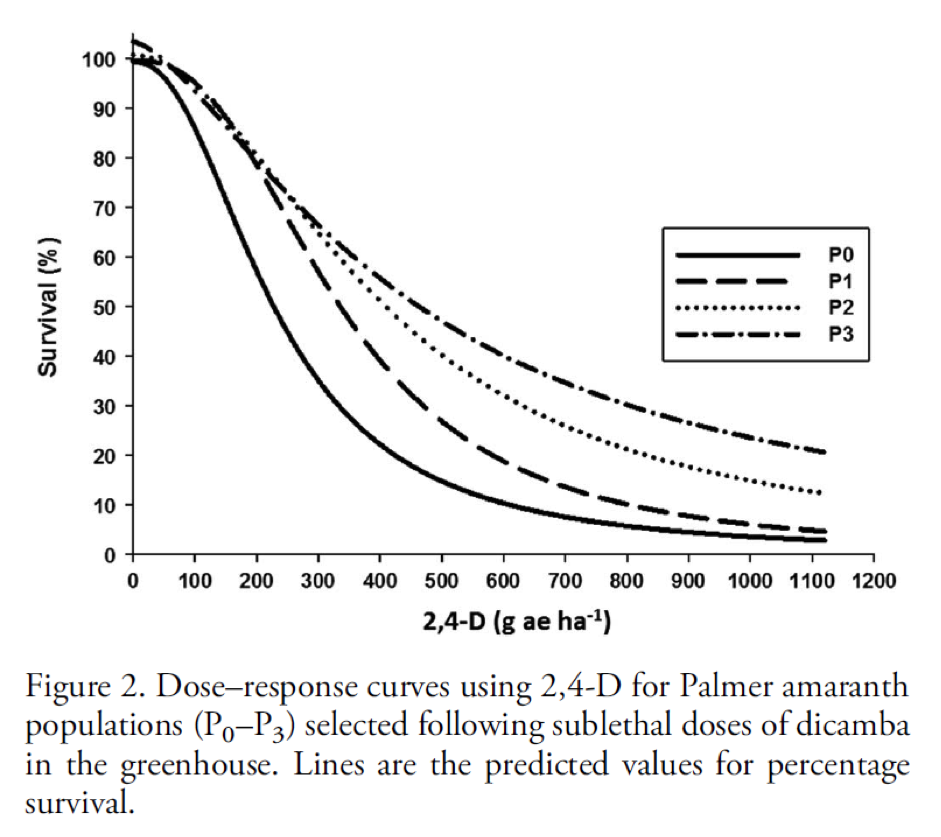 Putting it into perspective

While we have observed a shift to the right in the dose response curves as a result of recurrent selection at low doses of dicamba, this is considered to be a fairly small shift. This shift is not to be underestimated as it does represent a big risk for the evolution of dicamba and 2,4-D resistance; however, other similar studies with different weeds and herbicides have often observed a greater shift in resistance.

How does it happen?

It is likely that low-dose recurrent selection leads to accumulation of “genes with small additive effects”. Low-dose recurrent selection is much slower in self-pollinated species such as wild oat and fastest in species that must cross pollinate such as annual ryegrass. Pigweed is dioecious, meaning its male and female flowers grow on separate plants and they must cross-pollinate to produce seed.

New technology is important to help us combat our resistant weed problems but we must treat it carefully, like a fragile new toy, if we want it to last. As we have seen many times over, herbicides alone are not the answer to herbicide resistance. New herbicides and new traits are fantastic tools, but they must be used carefully and in combination with other cultural practices if we want them to last. The researchers in this study have broken the new toy before the farmers have been allowed to unwrap it, but it doesn’t have to be this way. Handle with care!

Check out more from Jason Norsworthy in this WeedSmart webinar on resistance in corn, soybean and cotton crops in the US here.

AHRI researcher Michael Ashworth has previously done work in this area. The findings by Tehranchian reflect a similar resistance response in wild radish, with four generations of sublethal doses resulting in a nine-fold level increase in 2,4-D resistance. You can check it out here.

Herbicides and stubble – some wash off, some don’t
Double breaks – a double shot at annual ryegrass