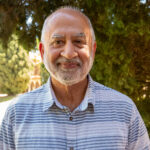 Work up, work back, seed. That was the system.

Then along came no-till. Spray a knockdown, seed in one pass. Game changer.

Then came a more variable climate and a suite of pre-emergent herbicides that made early and dry seeding possible.

And now we have seed early at all costs, dry if necessary, and get the crop up and away on the first rain.

But what does this do for weeds? Should we delay sowing and wait for a knockdown, or have we got it right?

University of Adelaide researchers Gurjeet Gill and Ben Fleet have recently completed some research that tells us no knockdown, no worries. They found that delaying sowing of wheat or barley to get a knockdown in some cases reduced the number of grass weeds in crop, but the weeds in the later sown crop often set more seeds than the lower number of weeds in the early sown crop. 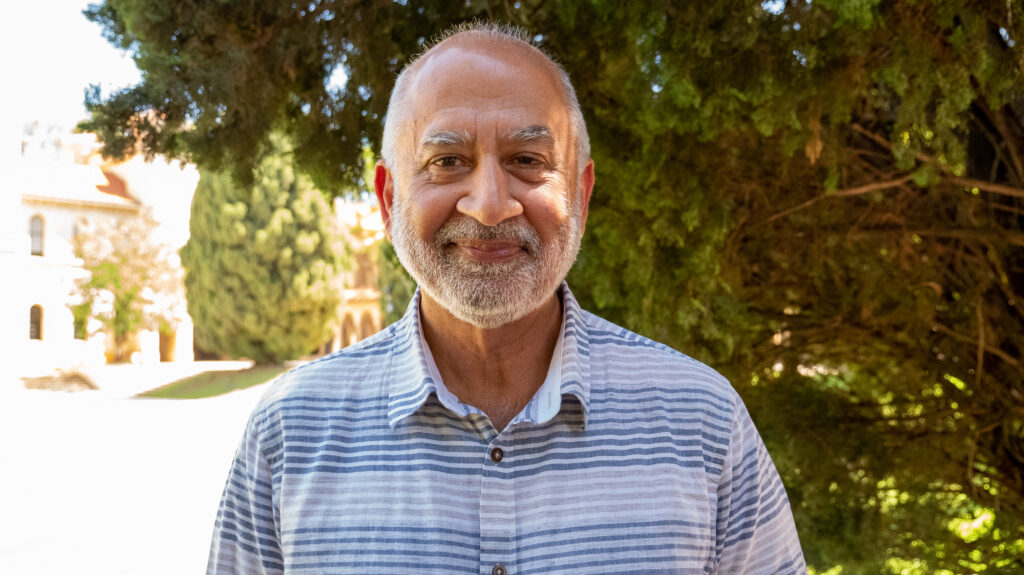 And it was no surprise that delaying seeding cost a lot of money in lost yield.

Their observation was that late sown crops grow in colder conditions where the crop struggles and the weeds thrive. The cold growing conditions reduce the competitive ability of the crop and the weeds can set a lot of seed. The researchers added that they don’t want to downplay the benefits of a good knockdown. “By all means when a knockdown opportunity presents itself we should take full advantage of it, but in most situations, we don’t believe that growers should delay sowing to create this opportunity,” Dr Gill said.

Gurjeet and Ben have recently reported on three trials that they’ve conducted over the past couple of years with GRDC investment. The message – sow competitive crops early combined with robust pre-emergent herbicides, to maximise yield and minimise grass weed seed set.

This isn’t the first research that has found similar results. We reported on some similar work by Dr Chris Preston and his team last year – check out the AHRI insight here.

This time around the team conducted three trials over two years at various locations around South Australia.

This trial shows that delaying seeding sometimes doesn’t affect the number of weeds in the crop but it can affect weed seed set.

Ryegrass in the later time of sowing plots had twice as many seed heads (and likely double the seed set) compared to early sowing.  Cool growing conditions reduced the competitive ability of the wheat and allowed the ryegrass to run rampant.

Sakura + Avadex was the best pre-emergent herbicide resulting in the highest yield with the lowest ryegrass seed set.

Mind the gap! The yield gap that is… 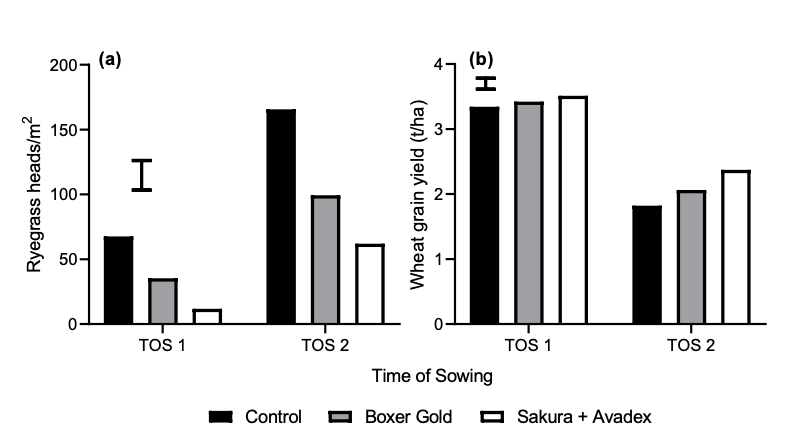 The Minnipa trial demonstrates why delayed sowing can work. A good knockdown, fewer weeds in crop and less weed seed set for the late time of sowing, but it comes at a big cost.

Figure 2. The effect of time of sowing (TOS) wheat and herbicide treatments on in-crop ryegrass plant density (a), and its seed production (b), at Minnipa in 2018. The error bars represent LSD (P=0.05).

The six-week delay in sowing at Minnipa resulted in a lot fewer ryegrass plants in the crop.

This time the knockdown paid off and ryegrass seed set was much lower in the later time of sowing.

Once again Sakura + Avadex was the best pre-emergent herbicide resulting in high yield with the lowest ryegrass seed set. Favourable soil moisture at the second time of sowing enhanced the performance of the pre-em herbicides and the knockdown.

The delay in seeding resulted in fewer ryegrass plants in the crop and lower ryegrass seed set, however, it cost $160/ha in lost yield.  The combination of early sowing and robust pre-emergent herbicide is the most profitable treatment and has done enough to ryegrass seed set to be considered acceptable. 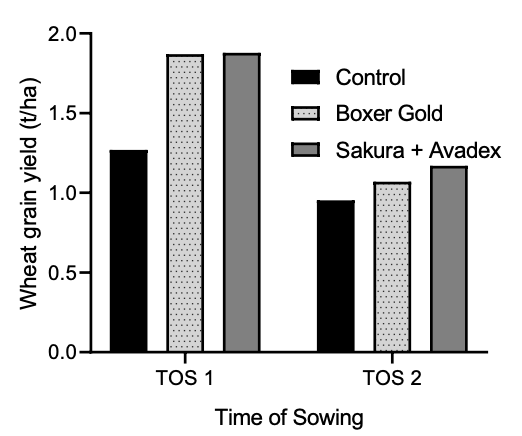 This trial is at the extreme of what cold conditions can do to crop competition. The later sowing had fewer weeds in crop but more seed set than the early sowing treatment, and once again a big yield penalty for late sowing.

The four-week delay in sowing resulted in a lot fewer bromegrass in crop – roughly half.

Seed production of bromegrass in late sown barley was equal to or more than that of early sown barley. This is once again likely due to the cold conditions experienced by the late sown crop reducing its competitive ability.  The exception was where the very effective Imi herbicide Intervix was applied post-emergent, killing all of the bromegrass.

Given that Spartacus CL is Imi tolerant, this allowed the post-emergent application of Intervix which killed all of the bromegrass resulting in the highest yield.  This is a reminder of what life was once like for ryegrass when we had effective post-emergent herbicides in cereals.

There was only a small difference in yield between seeding rates for TOS 1 but for TOS 2 the higher seed rates had a higher yield. It seems that barley growing in warm conditions has crop competition with weeds covered, but when things cool down, the higher seeding rates gave the barley a competitive boost. 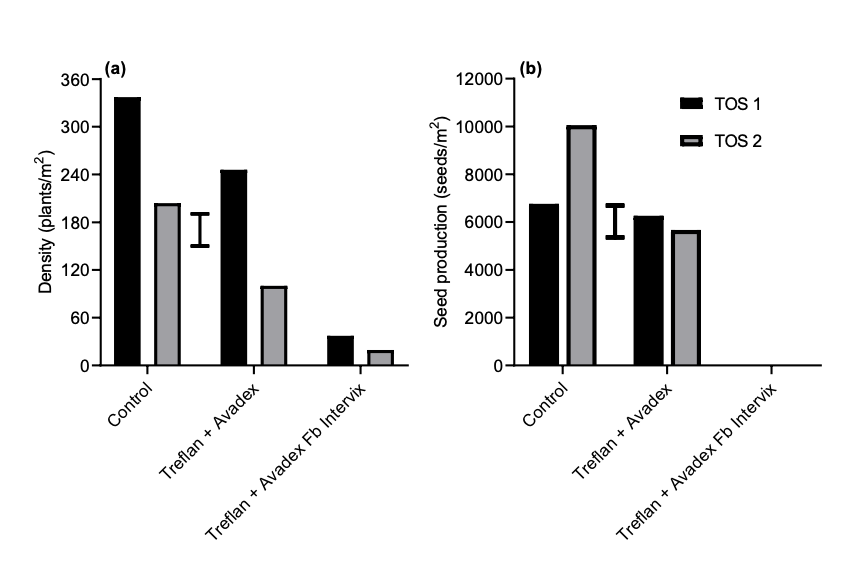 Figure 4. The effect of sowing time and herbicide treatments on brome grass plant density (a), and brome grass seed production (b), at Marrabel in 2018. The error bars represent LSD (P=0.05). 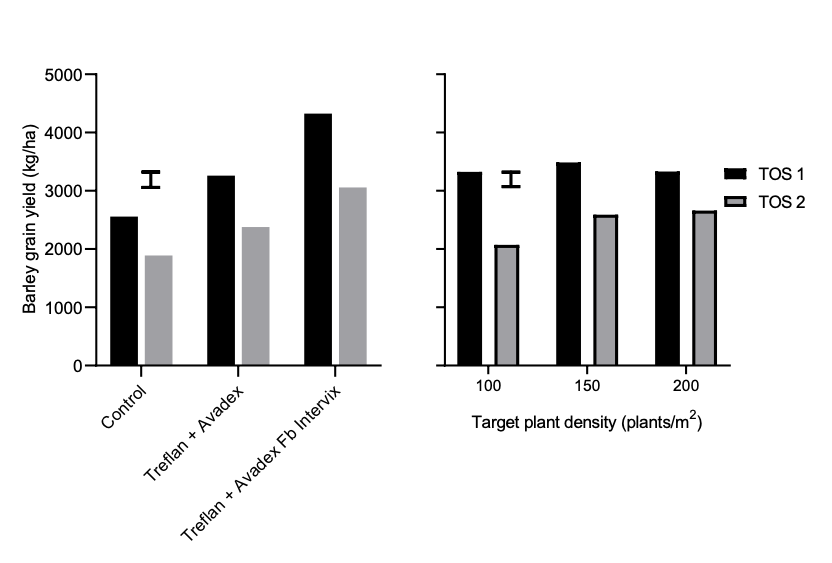 Early sowing of a competitive crop with a robust pre-emergent herbicide is simply the best thing to do in terms of weeds and profit. This is essentially the farming system that we have moved towards in most of southern Australia over the past decade or so and it is reassuring that research suggests that we’re on the right track.  New pre-emergent herbicides in combination with continually improving crop competition factors will make this system even better in the future.

The research undertaken in this project was made possible by the significant contributions of growers through both trial cooperation and the support of the GRDC, the authors would like to thank them for their continued support.