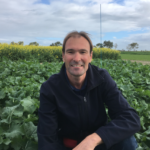 Every parent knows that we simply can’t have favourites. We must love each of our children equally.

We at AHRI shouldn’t have favourites. We love all weeds research papers equally, but this paper is perhaps a little more equal!

It is the work of Martin Harries from DPIRD involving a six-year focus paddock survey with data from 184 paddocks spanning 14 million hectares of cropping land in Western Australia, made possible with GRDC investment.

Martin has recently published the weeds aspect of this research as part of his PhD and reported that we’re having a win with weed control in Western Australia.

It was found that 72% of cropping paddocks had fewer than 10 grass weeds/m2 at anthesis, regardless of herbicide resistance status. Martin concluded that in the majority of cases people are effectively managing weeds despite high levels of resistance by using a diverse range of tactics. He also noted that land use has changed in order to manage resistant weeds with less pasture, and quality of pastures has dropped, as well as fewer legumes and more canola.

We shouldn’t have favourites, but we are in awe of the massive effort put in my Martin with the help from Ken Flower and others at UWA to not only monitor so many paddocks for six years but also the great results showing that our farmers are managing resistant weeds while increasing crop area. 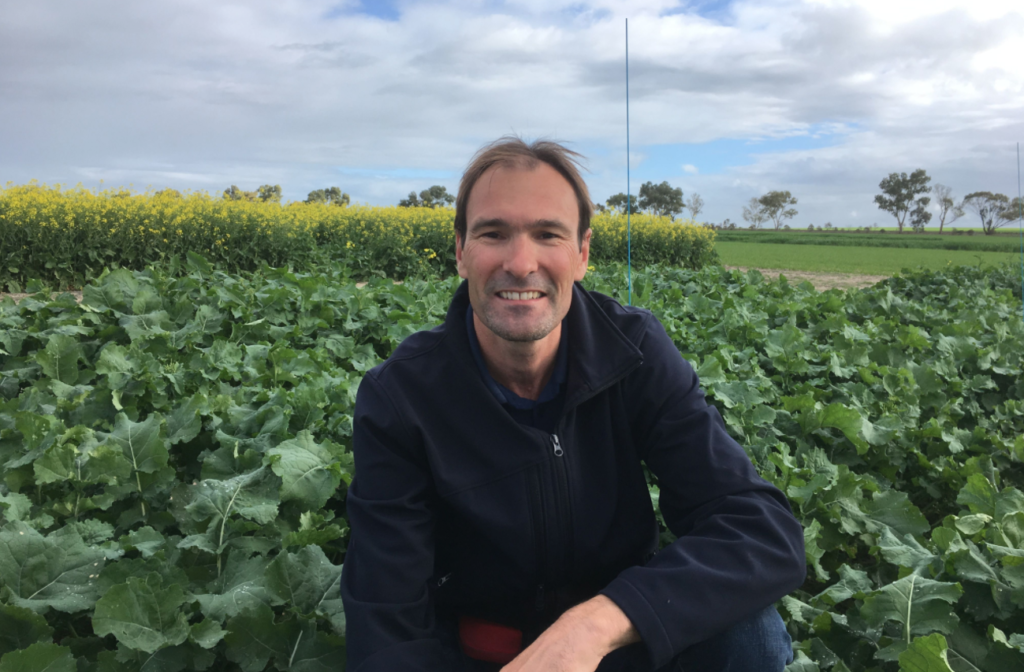 Western Australia, 6 years of survey data from 2010 to 2015 from 184 paddocks spanning 14 million hectares of cropping land. This totals 1104 paddock years of data; however, data was not acquired from every paddock every year. 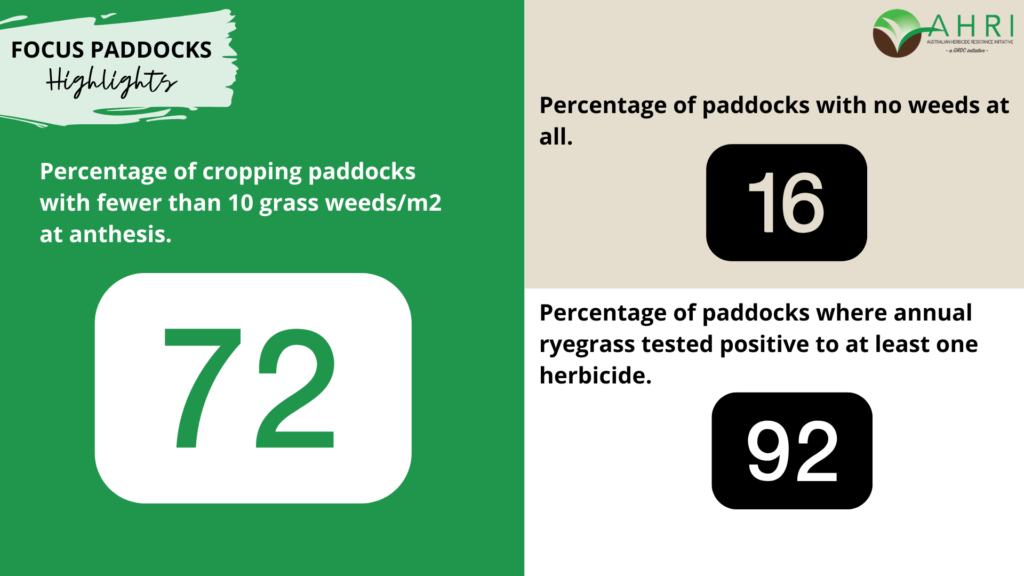 It appears that pasture has high weed numbers but it depends on your definition of a weed. We say that a weed is a plant out of place, and many of the “weeds” in pastures are actually considered to be stock feed. 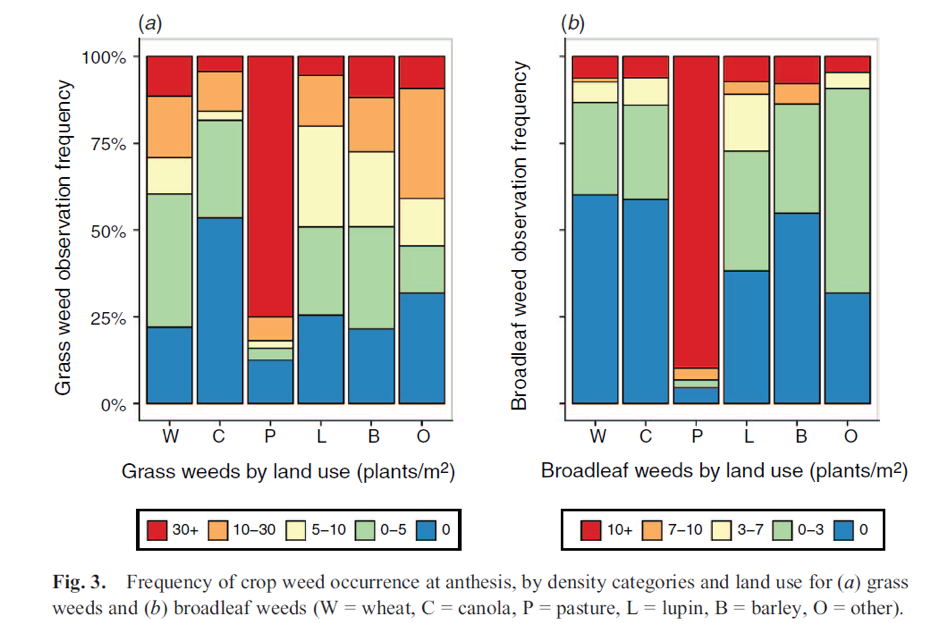 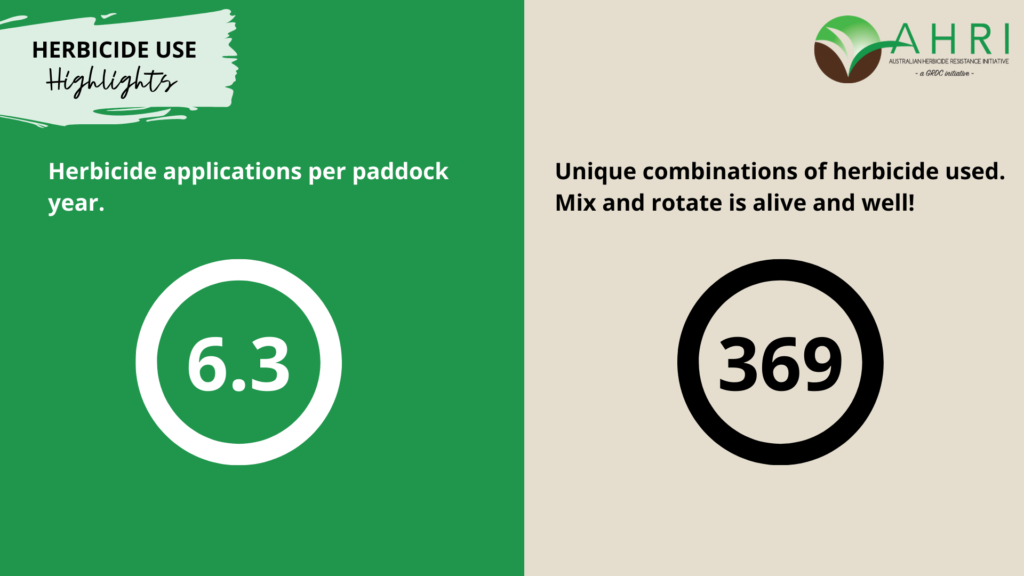 The chart below represents 614 paddock years of herbicide use data from 2010 to 2014. There were no surprises that glyphosate was the most frequently used herbicide with pretty much every paddock receiving a shot of glyphosate every year. Possibly the most concerning data from this survey is that 45% of glyphosate application to canola was applied as a single active. This represents a resistance risk for a range of weed species.

We were perhaps a little surprised to see how much Triasulfuron was used as there is widespread resistance to ALS, group B herbicides. However, we postulate that much of this is applied to control volunteer canola and legumes. 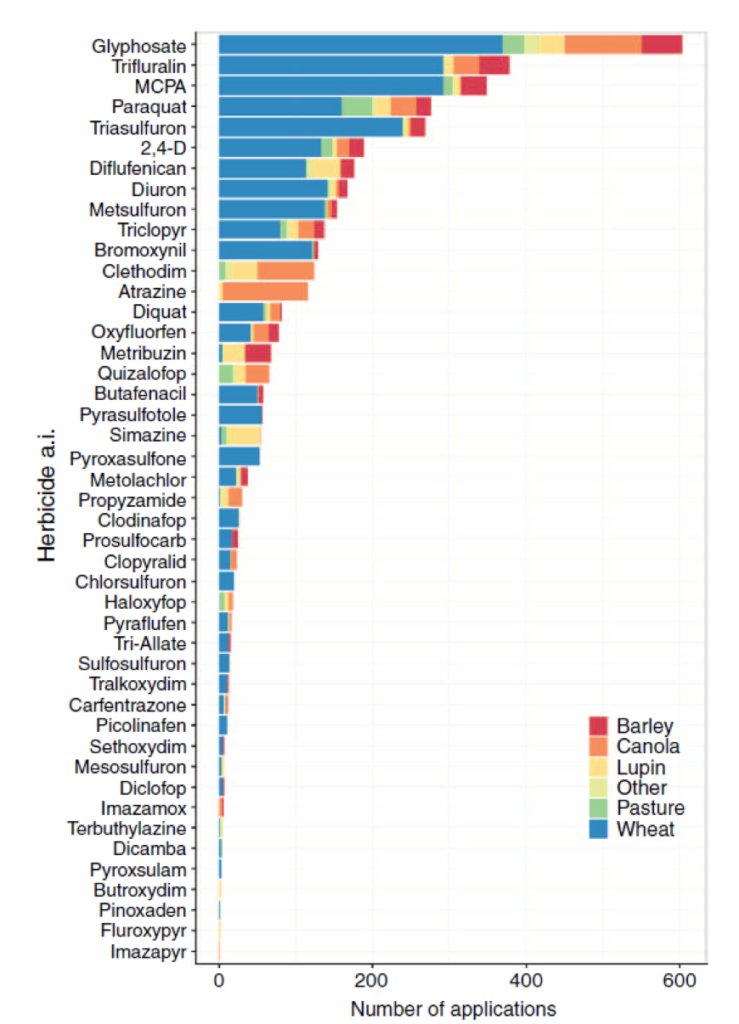 One of the great initiatives of this paper was the creation of the Integrated Weed Management Index (IWMI). This was used to compare the level of diverse weed control tactics between 528 paddock years. To do so they tallied the IWM practices used in each paddock year using the control values in the table below that were derived from the AHRI computer model, RIM.

Martin and the team then correlated IWMI with grass weeds in crop, presented in the chart below. 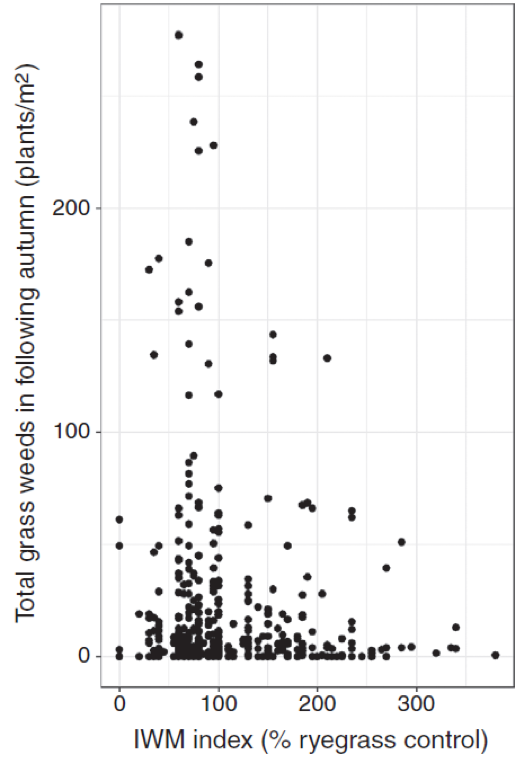 It’s possible to grow clean crops without using diverse weed control tactics, however, it’s also true that growers who are using a diverse range of tactics are having a win.

There were also differences in the IWM index between regions of Western Australia. Historically, the northern region of WA was first to have big problems with herbicide resistance and perhaps this is the reason for this region using a more diverse range of weed control tactics.

This study also identified which were the most common IWM practices being used by Western Australian grain growers between 2010 and 2015 outlined in the table below.

Harvest weed seed control appears lower than previous surveys have indicated, however, we must keep in mind that this data is for paddock years whereas previous surveys asked growers if they were using the practice on their farm. Given that back in 2010 to 2015, the main HWSC practice was narrow windrow burning, most farmers only used this over a percentage of their farm in suitable crop types.

The highest levels of seed set control were in lupin, canola and pastures.

No correlation between ryegrass numbers and resistance level

When cumulative ryegrass numbers were plotted against mean ryegrass survival (MS%) from resistance testing, Martin found no correlation. In other words, paddocks with the highest levels of herbicide resistance were not necessarily the weediest. This is great news as it shows that our farmers are managing to beat resistant weeds with clever weed management. 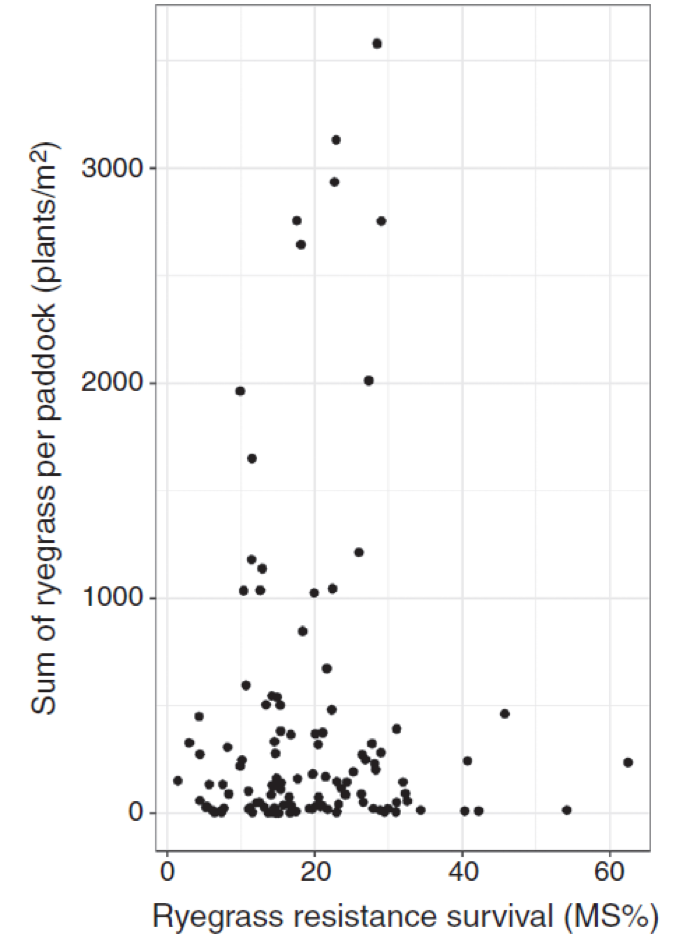 We are having a win with weed management in Western Australia and we have achieved this while maintaining or increasing crop area. Many years ago, we felt that herbicide resistance would be a threat to grain cropping and we would need to reduce our crop area to manage the weed seed bank. We know that the job isn’t done, and weed control will continue to be a challenge, but the results from this study are a great pat on the back for farmers, agronomists and researchers alike.

Hoe, hoe, hoe and away weeds go!
Something old, something new in annual ryegrass control