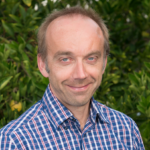 When you buy a birthday cake, the goods and services tax (GST) makes the cost of the cake bigger. If only Mr Hewson could have explained it so succinctly he may have been Prime Minister!

There’s another type of GST in plants that do the same thing to herbicide molecules. It makes them bigger and then the whole thing gets smashed to pieces.

You already know that AHRI researcher Roberto Busi created Sakura (Pyroxasulfone) resistant ryegrass in the lab before the herbicide was even released to the market because we reported on it here. Now Roberto and others have worked out how this ryegrass evolved resistance to Sakura before Sakura resistant ryegrass has become a problem in the field in Australia!

It was metabolism based resistance.

The GST in plants are enzymes called glutathione-S-transferase.  In other words, they join or transfer the big molecule glutathione onto other molecules. In this case, the herbicide Sakura. This roughly doubles the size of the Sakura molecule, and then other processes take place to break the whole thing into little pieces.  And it appears that this is how wheat tolerates Sakura too.

It’s rare for researchers to discover a herbicide resistance mechanism before it becomes a problem in the field and hopefully, this understanding will help us manage this problem when it becomes a reality.

Roberto and others have worked out how ryegrass evolved resistance to Sakura before Sakura resistant ryegrass has become a problem in the field in Australia!

The first step to figuring out this puzzle was to apply some radio labelled 14C-labelled Sakura to some known resistant and susceptible plants. The researchers found that:

The resistant plants broke down the Sakura molecule nearly twice as fast as the susceptible plants did.

The team then measured some known GST and P450 enzymes by PCR. PCR is a common technique used by molecular biologists to effectively read the code of a segment of DNA or RNA. In this case, they used quantitative PCR to measure how much RNA was present in the cells. RNA is the code for the P450 and GST enzymes, so if there is an upregulation RNA then there should be an upregulation of the enzyme.

They found that two different GST enzymes were overexpressed anywhere from 3-9 times more in resistant plants than in susceptible plants.

GST is the prime suspect

This research concludes that GST’s are the prime suspect but further research that measures the specific enzymes themselves, rather than just the RNA, is underway to confirm this once and for all.

The diagram below is for the science nerds out there.

Japanese researchers from Kumiai, the company that discovered Sakura, concluded the same thing.  Wheat tolerates Sakura through metabolic resistance mediated by GST enzymes.  You may also remember that ryegrass mimicked wheat when it came to the first cases of diclofop (Hoegrass) resistance. In general, terms, if cereals can tolerate a grass selective herbicide eventually the grass weeds evolve to survive the herbicide in exactly the same way.

We have spoken a lot about P450 enzymes over the years in their role in so-called metabolic herbicide resistance and we now know that there are other superfamilies of enzymes such as GST’s that are also responsible for this type of resistance. In this case, the researchers are 99% sure that GST enzymes are the cause of this case of Sakura resistance in ryegrass and future research will confirm this once and for all.

Role of metabolism in the selectivity of a herbicide, pyroxasulfone, between wheat and rigid ryegrass seedlings