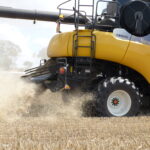 Roger Lowenstein, in his book about Warren Buffett wrote, “Buffett found it extraordinary that academics studied such things. They studied what was measurable, rather than what was meaningful”.

When John Broster from CSU and Michael Walsh from Sydney University set out to measure how many weed seeds were entering the chaff fraction in a modern harvester, they were definitely studying what was meaningful, but man was it difficult to measure!

In 2014, John and Michael set up trials with five different harvesters in NSW and found, much to their distain, that all of the harvesters were throwing a lot of weed seeds out with the straw fraction. This does not auger well for HWSC (no pun intended!).

Fortunately, in 2015, they tried again with a harvester that was set up to destroy weed seeds with an iHSD fitted and found, that when set up right, the vast majority of weed seeds were directed into the chaff stream and then into the iHSD mills. They also found that harvest speed had little effect on the fate of weed seeds, but it did have a big effect on grain losses.

If you’re using a form of harvest weed seed control (HWSC) that removes just the chaff fraction (eg. chaff cart, chaff deck, iHSD) there’s a real art to setting up the harvester to maximise the capture of weed seeds. Difficult to measure, but meaningful. 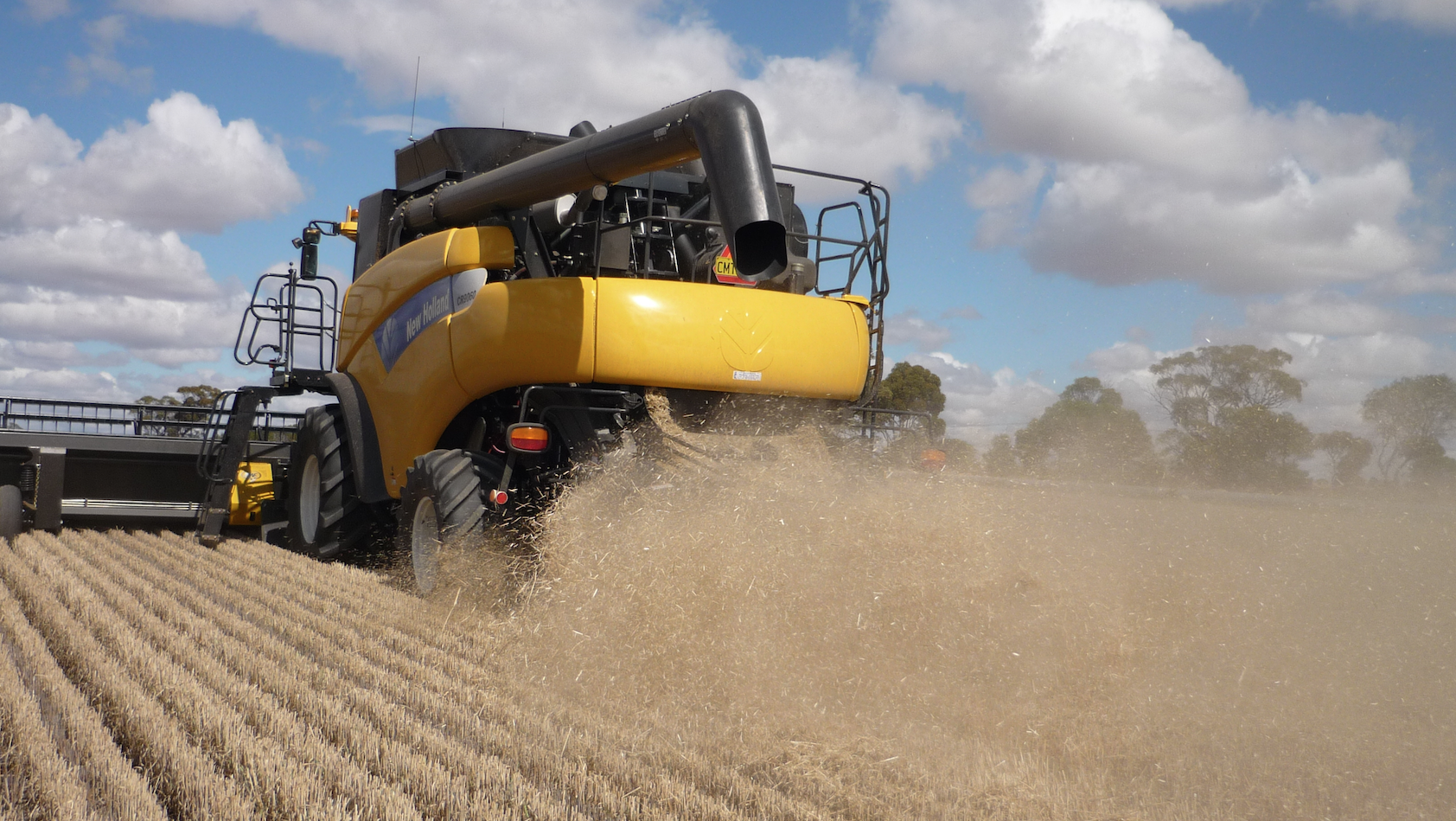 Maximising weed seed capture by setting up the header

10,000 coloured ryegrass seeds were fed into the front of the harvester and then painstakingly, it was measured where they ended up. On average, across five harvesters, about 50% of the weed seeds went out with the straw fraction (through the rotor). This was a disastrous result for HWSC. About 3% of ryegrass ended up in the grain tank and 47% ending up in the chaff fraction. The remainder was assumed to exit with the straw.

Back to the ol’ drawing board.

In 2015 they tried again, this time using a Case 9120 harvester fitted with an iHSD that was set up to maximise weed seeds entering the HSD mills. Bingo. This time only 3% of the ryegrass exited with the straw, meaning that 97% of ryegrass entering the front of the harvester could be captured and destroyed. The harvester used was a Case 9120 with the settings Rotor 950, Fan 980 rpm, Concave  10, Sieves; Upper 18 mm, Lower 11 mm. 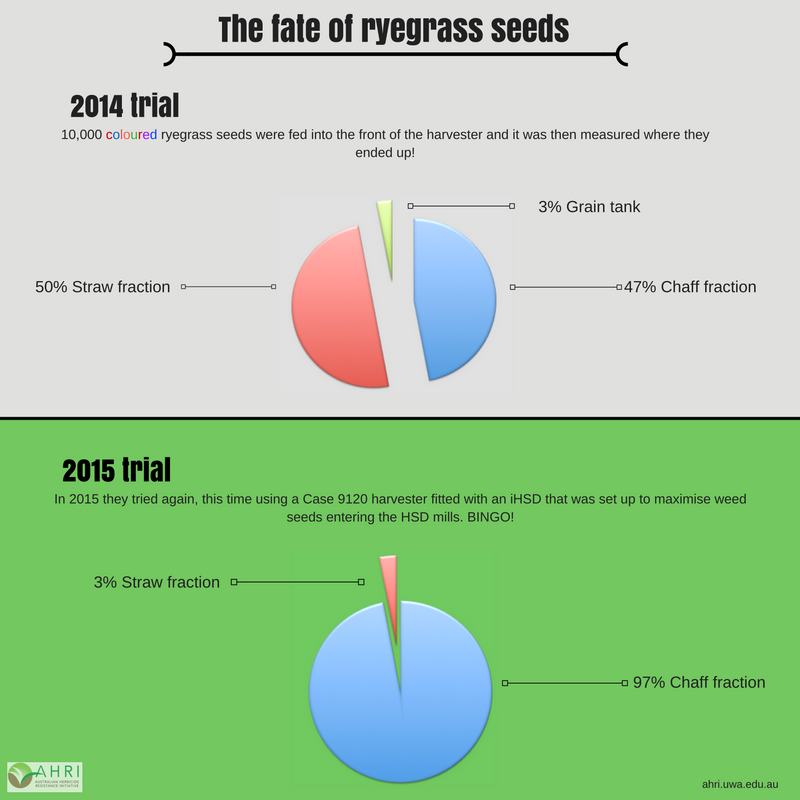 It is really hard to specify exactly how to set up the harvester for HWSC, but the 2015 trial shows that it is possible to get it right. All we can do is speak generally, and we all have a lot to work out together on how to get the best out of these machines to harvest both the crop and the weeds. To quote Ray Harrington, “We have to get the weed seeds out of the rotor. To do this we have to thresh the grain hard enough to get the weed seeds out of the seed head, and open up the grates of the header to get as much material as possible out of the rotor and onto the sieve”. For more on this check out AHRI insight on harvester set-up.

There is a large body of evidence that suggests new harvesters have more engine capacity than sieve and rotor capacity. They are all hat, no cattle!

A grain grower from the Chapman Valley did a great job of assessing harvest losses in canola a couple of years ago. He said to me, “It is amazing what settings you can change and modifications in the back of the header that you can make, without making any difference whatsoever to harvest losses” (he tried different concaves, grates, wires, sieves, sieve settings etc.). “The only thing that made any difference was slowing down”. He used trays on the ground and a sieving technique to accurately measure his losses from a New Holland 7090 harvester. The results are summarised below.

Table 1: Summary of canola harvest losses from a New Holland 7090 in Chapman Valley in 2012.

This grower saved $32/ha by slowing down from 15t/hr to 12t/hr canola harvest. This equates to $222 per hour that the harvester is working. To see how he did it check out this YouTube video.

Wheat grain loss was a similar story but the losses were lower. In 2012 he also put the New Holland 7090 to the test in wheat with the following results.

Table 2: Summary of wheat harvest losses from a New Holland 7090 in Chapman Valley in 2012 operated at different speeds.

Does a bigger, newer harvester fix the problem?

The grower mentioned above (who shall remain nameless) recently had a demo harvester on his farm, a Claas 770 which is a class 8 harvester. He applied his measurement technique above and found the same thing. When harvesting canola, slowing down reduces grain losses.

Harvesting at the full engine capacity of your harvester is likely to result in significant grain losses. Slowing down seems to be the only reliable solution to this problem. A bitter pill to swallow when you have spent a fortune on your harvester! To maximise weed seed capture for harvest weed seed control tools that remove the chaff fraction only will take some harvester modifications and some specific settings to ensure that the majority of weed seeds are in the chaff fraction. This is difficult to prescribe, but research has shown that it is possible.

Paper – Harvest weed seed control: the influence of harvester set up and speed on efficacy in south-eastern Australia wheat crops