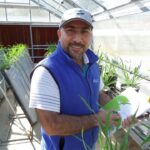 Which herbicides wash off wheat stubble?

Ask any farmer how hard it is to wash the yellow trifluralin stain out of their clothes and you had better be ready for a tirade of domestic hardship! “I just throw them straight in the bin these days”, commented one irate farmer. “I would sooner try and wash off a tattoo than remove that horrible yellow stuff from my work shirts.” No wonder the urban myth tells us that trifluralin was originally developed as clothes dye.

If Yaseen Khalil’s recent research is anything to go by, trifluralin would make a wonderful dye and it’s just about as hard to wash off stubble, as it is clothes. Yaseen is completing his PhD at UWA under Ken Flower and has done some fantastic research to help understand which herbicides wash off wheat residue with rainfall and which are more tightly bound.

Yaseen compared Sakura, Trifluralin and Arcade (prosulfocarb) herbicides by spraying them onto wheat stubble then trying a whole range of techniques to wash the herbicides off the residue with simulated rainfall.

• Sakura washes off easily, Arcade less so and trifluralin less so again
• 5mm of rainfall was enough to wash all Sakura off residue and into the soil
• Herbicides sprayed onto wet stubble are more tightly bound than dry stubble; and
• Rainfall intensity had little effect.

While this is good news for Sakura, this research also showed that rainfall, in general, does wash a range of the herbicides from stubble, just some more than others. 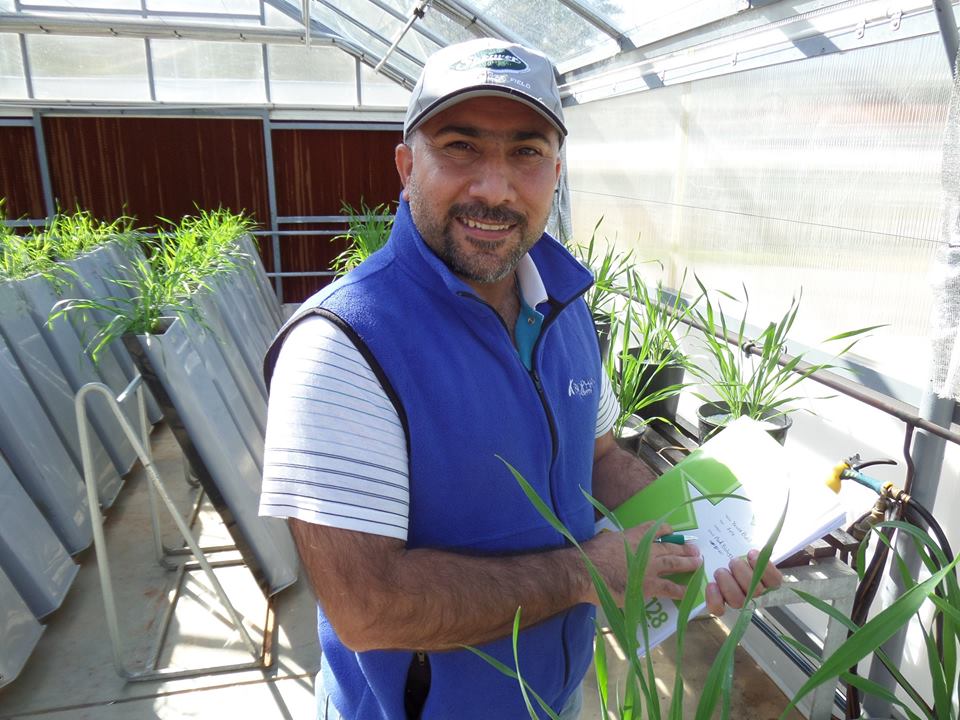 Yaseen Khalil on the job at UWA in Perth, Western Australia

From Syria to Perth

Yaseen is originally from Syria and is currently completing his PhD at the University of Western Australia, supervised by Ken Flower in the UWA School of Agriculture and Environment. For his research, he’s tackled an area where there was previously plenty of speculation, but little hard data.

Many agronomists have a gut feel for how herbicides behave when sprayed onto crop residue based on their experience. This research will tell them that their gut feel was largely right, but now there’s data to back up what they’ve seen in the field!

For this research, Yaseen placed petri dishes of soil in plastic trays and then covered them with wheat straw. This residue was then sprayed with the herbicides listed below and various amounts of simulated rainfall applied over the residue.

Many of the treatments contained 4t/ha residue lying flat in the trays. As can be seen in the photo below, this represents a high level of ground cover, but some herbicide droplets can make it through to the petri dishes of soil below the stubble even in the absence of rain.

Ryegrass was later planted into the soil in these petri dishes, watered and grown as a bioassay. Ryegrass shoot length was measured to assess herbicide efficacy.

Yaseen’s trials contained hundreds of pots, generating vast amounts of data, so we’ll just show you the highlights. The graph below compares the three herbicides, sprayed onto 4t/ha wheat residue, then with various amounts of leaching rain applied immediately after spraying. 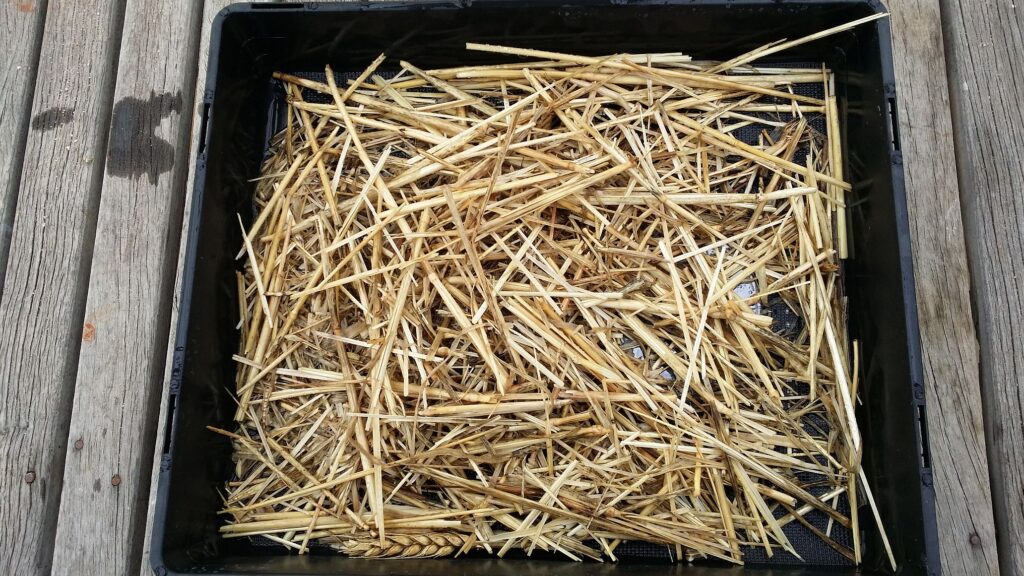 Residue which was tested in the lab

From this, it’s evident that with 5mm of rain or more a large percentage of Sakura is washed from the straw into the petri dish killing all of the ryegrass that was then planted into this soil. Even where no rain was applied to the Sakura treatment, ryegrass growth was limited. This indicates that only a small amount of Sakura is required to control the ryegrass in these lab conditions.

Comparing the nil rain with the other rainfall treatments it appears that perhaps 2/3 of the Arcade (prosulfocarb) and 1/3 of the trifluralin was washed from the residue with rainfall. Interestingly, rainfall above 5mm was of little additional benefit. 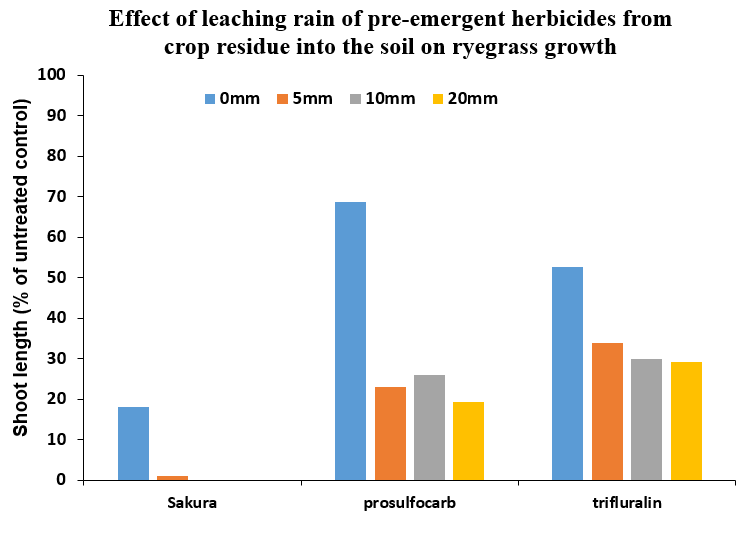 This is perhaps one of the more surprising results of this research. When herbicides were sprayed onto wet residue, they were bound more tightly than herbicides sprayed onto dry residue, with the exception of Sakura, which once again washed straight off the stubble with rainfall. 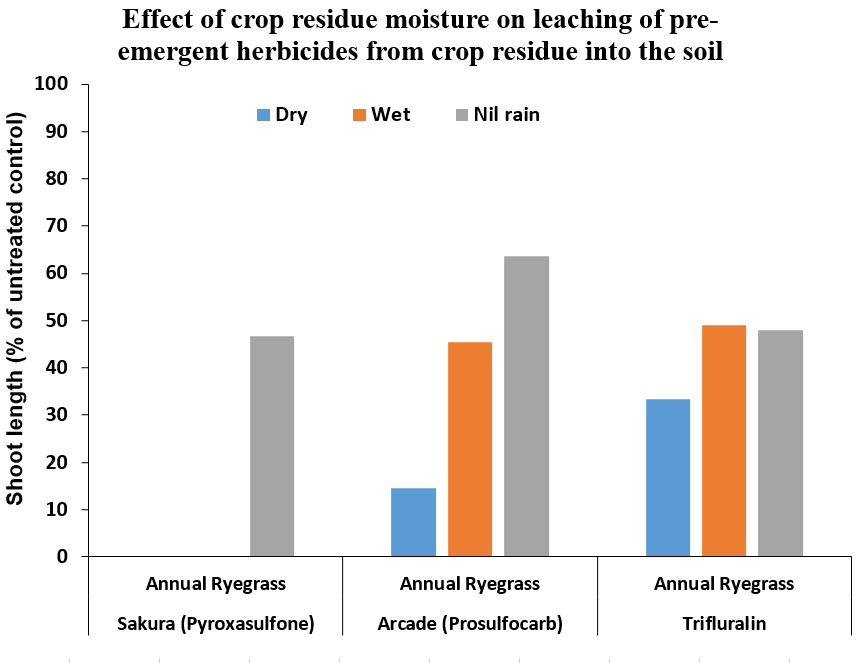 As you may expect, the more residue on the ground, the more likely it is that herbicides will be bound to it. Lower levels of residue in combination with leaching rain resulted in good herbicide efficacy for all herbicides. 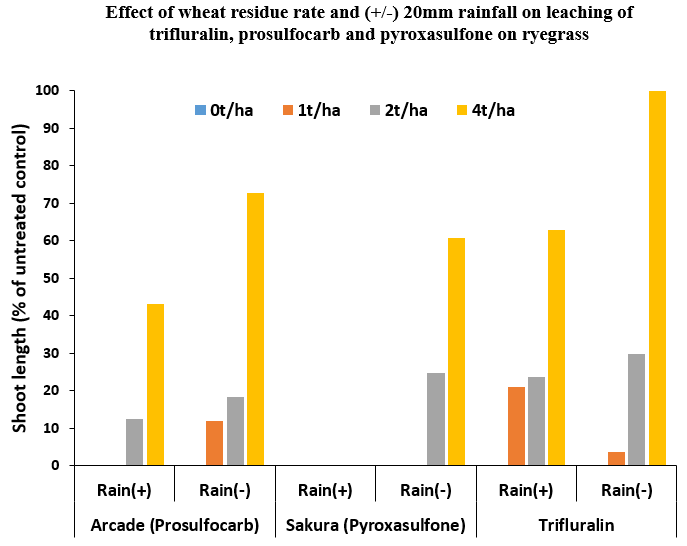 What about where the residue is incorporated by the seeder?

We have known for a long time that herbicides such as trifluralin are tightly bound to stubble. However, there has also been plenty of field research and observation that if this stubble with trifluralin bound to it is then incorporated into the soil by the seeding operation, it’s possible to achieve good herbicide efficacy. This is certainly the case, however, most will agree that the best place for a pre-emergent herbicide is on the soil, not the stubble.

With this research, Yaseen has added hard data to an area that will help agronomists to better understand our key herbicides. The good news is that rainfall does leach herbicide from crop residue, especially herbicides with properties such as Sakura.

Why do pre-em herbicides last so long before resistance bites?
New toys for the control of resistant pigweed in the USA