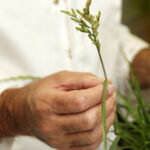 To break a herbicide such as glyphosate takes considerable effort. The Americans have broken glyphosate in a big way due to overuse, and Brazil and Argentina are not far behind. As an indication of the scale of the problem, in Arkansas last year over half of the cotton crops were hand weeded before harvest. How did they achieve this amazing feat? In a nutshell, they universally adopted Roundup Ready crops and abandoned almost all other forms of weed control for about a decade. The USA now has the unenviable title of the world’s biggest herbicide resistance problem.

You may well be thinking that could never happen in Australia. It is true that we are not as reliant on glyphosate as the continuous Roundup Ready crop system in the USA. However, we may be on our way to a considerable problem. A recent and extensive random herbicide resistance survey of Western Australia completed by Mechelle Owen of AHRI with GRDC funding has uncovered 25 populations of ryegrass that have evolved resistance to glyphosate. Now is not the time to be complacent. As the weeds emerge with opening rains, we are reminded not to automatically reach for the glyphosate. Paraquat based products are now very cost effective and offer a viable alternative for small weeds.

Is Australia on the verge of developing a significant glyphosate resistance problem? Here are a few stats that would suggest that perhaps we are.

The Australian Glyphosate Sustainability Working Group recently reported that currently there are:

The 2010 AHRI survey visited a total of 466 cropping paddocks and annual ryegrass was found in 78% of these paddocks (362 paddocks in total). Annual ryegrass is Australia’s most prevalent weed and it also just so happens to be the world champion at developing resistance to herbicides.

By comparison, the USA has 13 different weed species that have developed resistance to glyphosate. These weeds are a problem in over six million hectares of crop (some reports suggest that this could be as high as 25 million hectares).

Weeds find it hard to evolve resistance to glyphosate compared to other herbicides. However, we will break glyphosate if we over rely on it.

Weed Destructor integrated into harvester
Think outside the drum