You are here: Australian Herbicide Resistance Initiative › News › Is there an invisible gorilla in your paddock?
0
0
0
0
September 10, 2019

Many years ago, researchers from Harvard University asked people to watch a casual basketball game and count how many passes were made by the team wearing white shirts. If you haven’t seen it before, take a quick look before you read on.

The experiment had nothing to do with counting or basketball. Instead, it demonstrated how we miss much of what is going on around us. In this case, only half the viewers noticed a gorilla walking through the middle of the game.

Today, AHRI PhD student Huan Lu is studying herbicide-resistant wild radish rather than people, but he still wants to make sure he doesn’t miss any gorillas.

Huan Lu’s been investigating a population of wild radish that has the infamous Ser-264-gly mutation. This is the target-site mutation that is behind TT canola and makes wild radish highly resistant to PSII-inhibiting herbicides like atrazine and, to a lesser extent, metribuzin.

But, he wondered if there was more to this resistance than first meets the eye. Does focusing on the strong 264 mutation mean that we could fail to identify other important resistance mechanisms?

Effectively, if we just focus on the 264 mutation, that metabolic gorilla is going to come back to bite us. 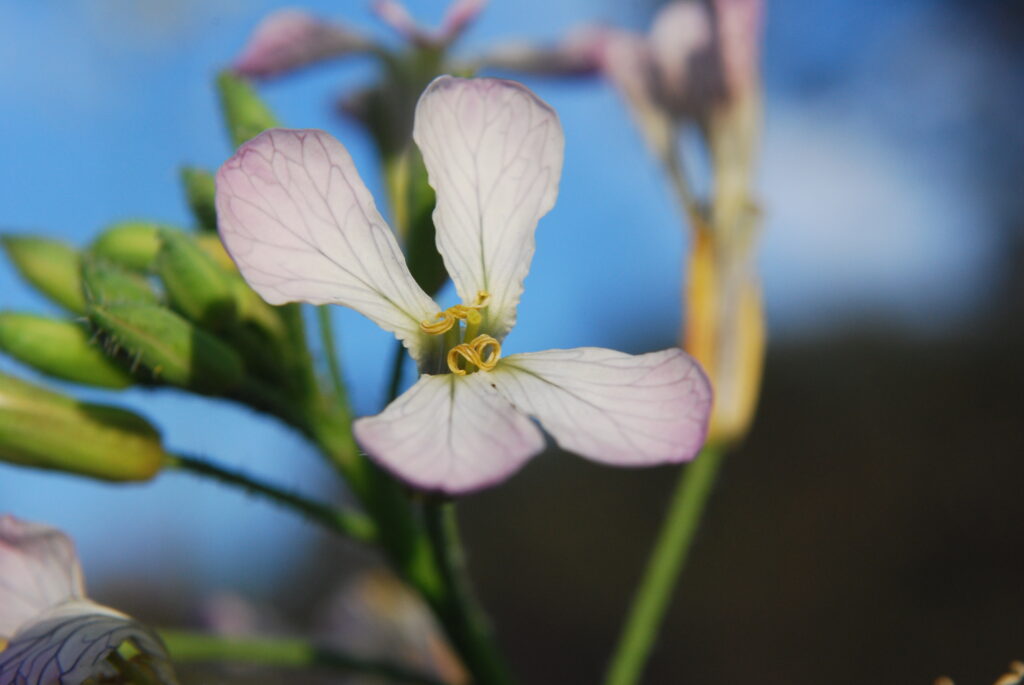 Don’t be fooled by the delicate flowers of wild radish! They’re a very problematic weed.

Target-site resistance is often a mutation at the herbicide’s target site. The 264 mutation in the psbA gene prevents herbicide from binding to the chloroplast D1 protein.

Non-target-site resistance is any mechanism that reduces the amount of herbicide to a sublethal dose before it reaches the target site. This can include limiting herbicide uptake and translocation or breaking the herbicide down through metabolism.

Enhanced metabolism of PSII-inhibiting herbicides has been identified in several weed species including annual ryegrass, but it can be technically challenging to study and there is often a lower level of resistance than for target-site resistance.

What was the research?

Huan Lu collected metribuzin-resistant wild radish from the high-rainfall zone in the northern WA grain belt, a region where lupin-wheat rotations and the use of triazine herbicides are common. Gene sequencing showed that this resistant population contained the 264 mutation.

This is when he started to look for other resistance mechanisms. 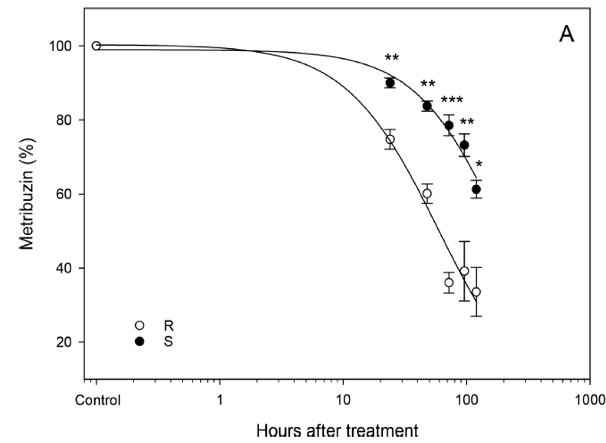 Figure 1. Metribuzin is metabolised twice as fast in the resistant wild radish plants (○) than in the susceptible plants (●).

Metabolic resistance is not as strong as the 264 mutation but it still has a few tricks up its sleeve.

The 264 mutation is maternally inherited, in other words, it is spread by seed, so the rate of spread depends on seed production. In contrast, metabolic resistance can also be spread by pollen, meaning it can potentially be spread more widely and more rapidly.

This multiple-resistance was found to be target-site mutation-based, but is also possible via metabolic resistance although not examined in the study.

What does that mean?

Metabolic resistance should not be overlooked. What it lacks in power it more than makes up for in numbers. And as we know weed control is a numbers game.

Low rates can select for metabolic resistance, particularly in weeds that are genetically diverse and cross-pollinating – just like wild radish.

Which brings us back to control. While target-site resistance is decisive, metabolic resistance is insidious. It can happen without us noticing. One minute a harmless basketball game, the next, a paddock full of gorillas.

To combat metabolic resistance, we need to use all the tools in the box. And the potential for multiple-resistance means that non-chemical tactics will be essential.

Take a moment to review The Big 6 and remember the best defence against gorillas is a strong tactical offence – and maybe a new pair of spectacles.

Crops are doin’ it for themselves
What’s the cost of harvest weed seed control for YOU?