It regulates Earth’s temperature, our bodies need it when we’re thirsty, and it covers about 70% of Earth’s surface.

Water is essential for a number of reasons, and here is one more.

Most Australian growers and agronomists would expect that 2.5 L/ha trifluralin or the full label rate of Sakura® would give between 70 and 90% ryegrass control in crop. However, research by Dr Catherine Borger (DAFWA Merredin, WA) has shown that it depends on how you apply it.

Catherine found that ryegrass control with Trifluralin or Sakura® increased from 53% to 78% as the carrier volume increased from 30 L water/ha to 150 L water/ha where there were high levels of ground cover of crop residue. The good news is that she found no difference in weed control between medium and extremely coarse droplet sizes. Surprisingly, Sakura® responded similarly to trifluralin.

The next time you reach for a pre-emergent herbicide, remember to add plenty of water! 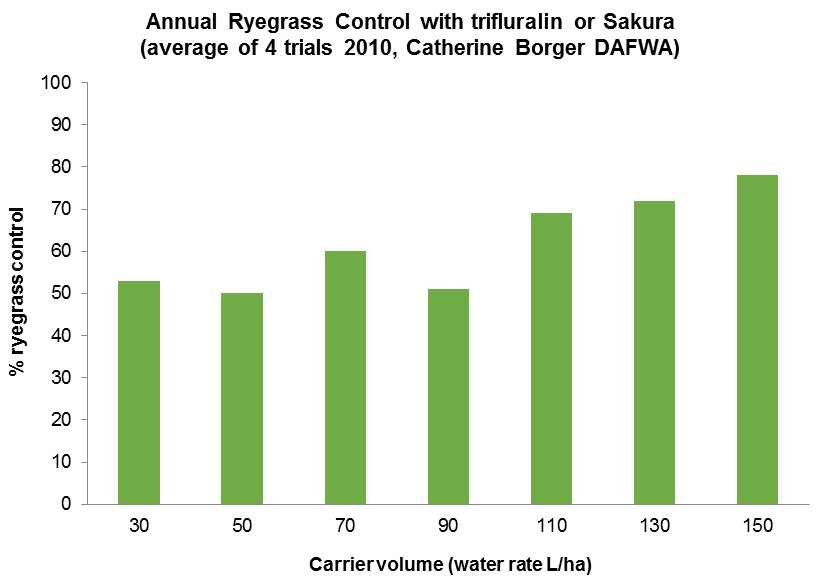 There are two ways to increase ryegrass control with trifluralin when spraying onto crop residue:

The trifluralin rate used across these trials was 2.5 L/ha (Trifluralin Xcel® 500 gai / L, Nufarm). The top label rate of this particular product is 2.9 L/ha pre-sowing of wheat, so there is little scope to increase the rate. Increasing the carrier volume had a big impact. The figure above shows the average ryegrass control achieved across four trials that as the carrier volume increased.

The level of ground cover by crop residue was high at all sites (Merredin slightly lower) in terms of percentage cover (50 – 90%). None of the sites were grazed with livestock over the summer leading up to the trials. 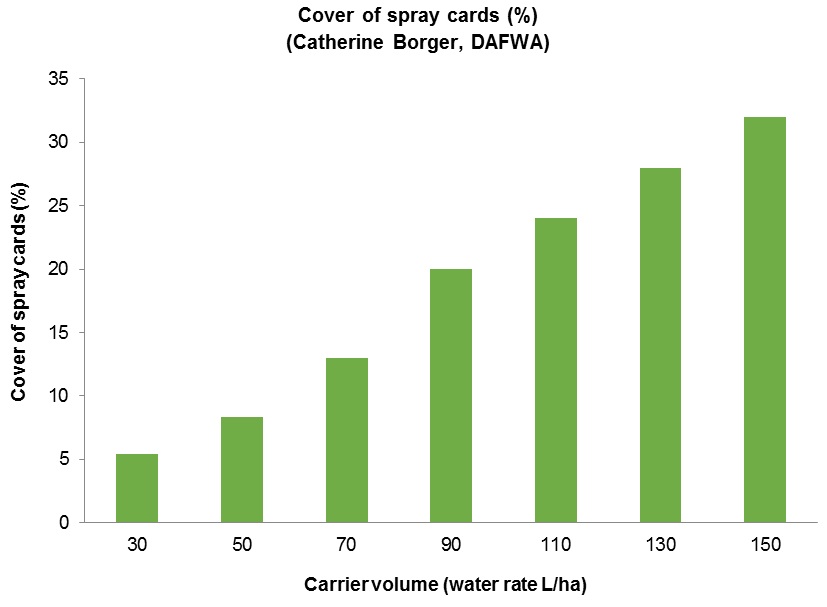 The surprising result was that trifluralin and Sakura® had a similar response to carrier volume despite these herbicides having different solubility / adsorption properties. Both herbicides featured in the Wickepin and Esperance trials, and only trifluralin was used in the Cunderdin and Merredin trials. Trifluralin has low solubility and is highly adsorbed to organic matter and Sakura is the opposite with higher solubility and low adsorption. Ryegrass control was similar for both herbicides and response to increasing water rate was also similar.

Simazine was not included in the trial, however we have added it to the table to show how comparable it is to Sakura® in terms of solubility and adsorption. In the past, many agronomists have not been overly concerned about using high water rates when spraying Simazine because any product that is temporarily bound may be washed off the stubble into the soil where it can be taken up by the weeds.

Given this theory, we would not expect Sakura® efficacy to be impacted by carrier volume, however, Catherine clearly showed with her research that high water rates benefited Sakura® as well as Trifluralin. Perhaps we need to rethink our application of Simazine in high stubble burdens as well.

It seems that the best place for pre-emergent herbicides is on the soil surface regardless of which product is being sprayed.

Catherine also found no response to droplet size. The medium droplets achieved slightly greater spray coverage on the spray cards; however there was no difference in ryegrass control between medium or extremely coarse droplet size.

For all trials, nozzles were spaced at 50cm spacing on the boom and the spray height was 60cm.

We must keep in mind, that for this research the different water rates were achieved by altering the speed of spraying. The highest water rate (150 L/ha) was sprayed at 4.7 km/h and the low water rate (30 L/ha) was sprayed at 24 km/h. Therefore, the droplet trajectory will vary as the speed changes. At higher speeds, droplets are more likely to travel horizontally and hit standing stubble (see the link to a video by Bill Gordon, Spray Application Consultant below). Bill Gordon also comments that 25 cm nozzle spacing reduces the shadowing effect from standing stubble (video link below).

It is also possible that the large droplets lose forward momentum when dropped from height (e.g. 80 cm) and then fall vertically, minimising the number of droplets that hit standing stubble. As soon as a knockdown (or any other leaf uptake herbicide) is added to the mix, then medium droplet size is recommended at high water rates. As always, make sure that you adhere to label recommendations for the particular herbicide you are using.

Growers who have access to an expert in boom spray set-up may be able improve efficacy of pre-emergent herbicides at lower water rates with big droplets at optimal boom height when everything is working in their favour. Everybody else or when conditions are against you, add more water.

The equation for maximising efficacy of pre-emergent herbicides where crop residue is present.

Remember: next time you reach for a pre-emergent herbicide, add plenty of water!

Perfect storm
When on a good thing…