If you drove to work at the same time each day and hit a major traffic jam each time, you might consider changing the time you drive to work. It seems that annual ryegrass has also come to the same conclusion.

AHRI research by Mechelle Owen has confirmed that greater seed dormancy is positively correlated with higher levels of herbicide resistance in ryegrass. That is, populations of ryegrass with a higher resistance status had higher levels of seed dormancy, and although these traits are not genetically linked, it does allow ryegrass to germinate later to avoid knockdown (burn down) herbicides.

Delayed germination and herbicide resistance are both traits that improve weed survival. Ryegrass has adapted to a regular, predictable cropping system to give it the best chance of survival. To overcome this adaptation we need to confuse the enemy and exploit this adaptation.

The 2003 AHRI resistance survey visited 500 paddocks in the grainbelt ofWestern Australia. 452 of these paddocks had annual ryegrass present, and enough seed was collected from 406 paddocks to conduct the dormancy study. 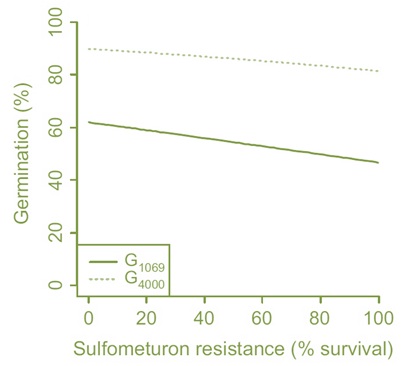 The data above clearly shows that the sulfometuron resistant populations are significantly more dormant (i.e. later emerging) than the susceptible populations of ryegrass in both summer and winter.

A wise man once said, “when on a good thing, don’t stick to it”. In other words, rather than sow the crop in a predictable manner at a similar time each year, it may be better to vary the sowing time.

A simple conclusion to this research may be to delay planting to facilitate improved knockdown of weeds prior to sowing. However, we know that inAustralia, early sowing has become an important part of our farming system and is integral to the success of our winter crops.

Perhaps we need to consider earlier sowing, or even dry sowing to give the crop the jump on weeds with delayed emergence and improve the crop’s ability to compete with the weeds. Early sowing combined with improved crop competition through higher seeding rates, narrow row spacing and competitive cultivars in combination with pre-emergent herbicides may be the best way to exploit the weakness of ryegrass that has adapted to a predictable cropping system.