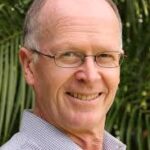 It would be really nice if research told us that fast food, chocolate and lollies were better for us than a balanced diet. We could eat what we want without a care in the world. There are those who believe that junk food is good for you, but the science doesn’t support this belief.

But unfortunately there’s a large body of science telling us that narrow row spacing is better for the crop, and detrimental to the weeds.

This AHRI insight will no doubt invoke a heartfelt boo and hiss from the true believers in wide rows, and we totally see where you are coming from in terms of convenience and cost. But we invite you to put your beliefs aside for a moment, and read this monumental piece of science that was 29 years in the making by DAFWA legend, Glen Riethmuller. Any person who turns up and sows a row spacing trial every year for 29 years is a true legend in our view.

In a nutshell, narrow row spacing yielded more and had fewer ryegrass. The trial began in 1987, but ryegrass measurement only commenced in 2003. Glen Riethmuller has had enough of this trial. He started it in Merredin, WA in 1987 and he is still at it, sowing the same row spacing treatments on the same plots every year. Anyone who has ever sown one of these trials knows how hard it is to move tines etc., so to do that 27 times is a huge task. Dr Catherine Borger, also from DAFWA, took Glen’s research and turned it into a scientific paper. There are volumes of data to report, but we’ll keep it simple. Narrow vs. wide row canola in 2009. No light reaching the ground in narrow row spacing plots. Ryegrass germinated about when this photo was taken and was not sprayed due to crop safety concerns. Very low ryegrass seed set in the 9 and 18cm row spacing treatments (top) compared to 27 and 36cm treatments (bottom).

The trial was conducted at the DAFWA research station at Merredin, 260 km east of Perth, Western Australia. Red loam salmon gum/gimlet soil.  Average annual rainfall from 2003 to 2013 was 301mm (range 168 to 400). Sown with a high box six rank combine that allows for a range of row spacing configurations with separate fertiliser tines deeper than the seed. Tines were removed from the combine as row spacing widened.

There is an old rule of thumb that wheat yield improves by one percent for every inch that the row spacing is reduced. Hundreds of trials have been conducted to produce this rule of thumb and the rule holds true internationally.

In this trial, the yield response across all crops was 1.2 to 1.5% per inch when comparing the wider row spacings to the 18cm (7”) treatment.

Why do narrow rows yield more?

The simple reason for reduced ryegrass seed set in narrow row spacing is light interception by the crop.

There is more to it than that! The critics of this research have quite rightly pointed out that trifluralin incorporation on the 36cm row spacing at 7km/h may have been compromised. They also point to the 1 L/ha trifluralin rate being too low. These are fair criticisms and would have definitely contributed to the higher weed burden in the 36cm row spacing.  2 L/ha trifluralin was applied just to the 27 and 36cm rows in 2007 while 1 L/ha for the 9 and 18cm treatments.

The 27cm row spacing had excellent trifluralin incorporation yet there were still much higher ryegrass numbers in the 27cm row spacing treatment than the 18cm treatment. Also, post-emergent grass herbicides were used in six of the 11 years reported here and for the last three years of the trial, pre-emergent herbicides that are not as reliant on incorporation were applied.

Burning stubble reduced the yield in some years, probably due to reduced moisture conservation and effects on soil structure and nutrient availability.

Ryegrass seed at harvest was reduced in the burnt plots compared to unburnt. This was probably due to a combination of burning destroying weed seeds on the soil surface and pre-emergent herbicide efficacy being improved due to reduced herbicide binding to residue.

In the 90’s, when no-till was being adopted, most growers had little choice but to adopt wide row spacing.  Stubble retention and no-till go hand-in-hand, so burning for stubble handling became frowned upon for good reason. Harvester capacity was limited, so harvesting low was out of the question, and seeders struggled to handle stubble. Wide rows were the only option.

In 2016 we have harvesters that can harvest low (10-15cm) and cut and spread the straw evenly. We also have seeders that can handle more stubble than their predecessors. Many growers in regions that regularly achieve wheat yields of 3 to 4 t/ha have successfully adopted 7” (19cm) row spacing with both tine and disc machines. It’s less convenient than wide rows and costs more, but the benefits outweigh the negatives.

You don’t have to achieve 7” row spacing

7” row spacing may well be achievable for some, but it may be difficult in the very high rainfall areas where wheat yields are 5t/ha or greater. We’re not suggesting that everyone must adopt 7”, but we do believe that most growers can achieve narrower row spacing than they’re currently using, and that they’ll benefit from doing so.

Crop competition with weeds will continue to become more and more important as herbicide resistance worsens. If narrow row spacing isn’t your thing, you may want to consider some of the other options to improve crop competition, such as East-West sowing, competitive cultivars and high seeding rates. East-West sowing is a good, free weed control tactic. But narrow row spacing is better than free; it makes more profit while improving weed control. Narrow row spacing is inconvenient, but the science is telling us that it is good for the crop and bad for the weeds. Give your crop heaven and your weeds hell!

P.S. There’s a lot of data from this research, some of which we have included below for those of you who would like to keep on reading.

More about the site

Trial design was randomised block design with six replications in year one with treatments reapplied to the same plot from 1987 to 2013. Data from 2003 to 2013 is presented here as this is the period of time where ryegrass seed set was measured.

The data below shows crop yield for the various row spacing treatments from 2003 to 2013. It’s good to look at this entire data set to see how repeatable the row spacing yield effect is. In very dry years (2007 & 2012) and the field pea of 2005 there’s little row spacing effect and there’s a strong row spacing yield response in all other years with the exception of 2013. 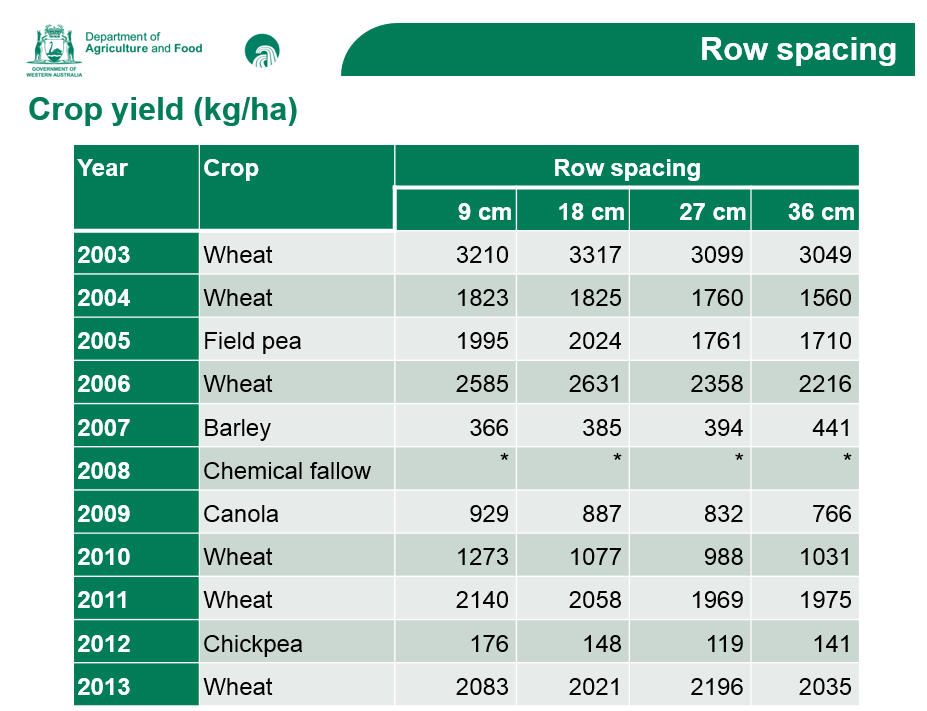 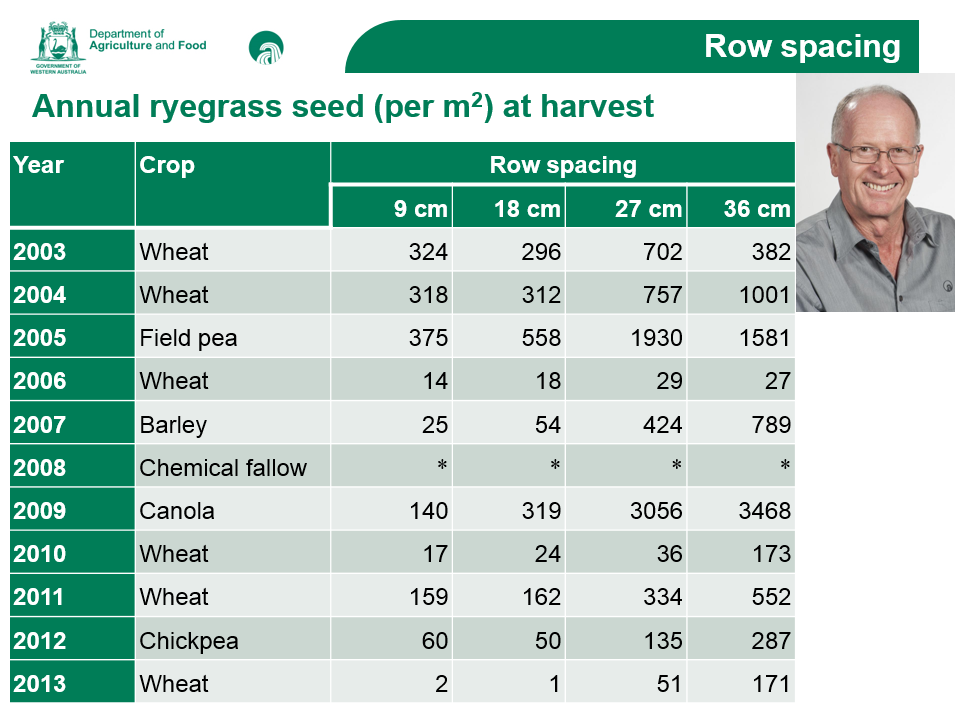 The trial also compared burnt vs. unburnt treatments. The data below show that there was no difference in yield between burnt and unburnt in many years of the trial but in some years there was a significant difference. This is likely due to moisture conservation from retained stubble being very important in some years and not others depending on how the rain fell in Autumn / early winter. 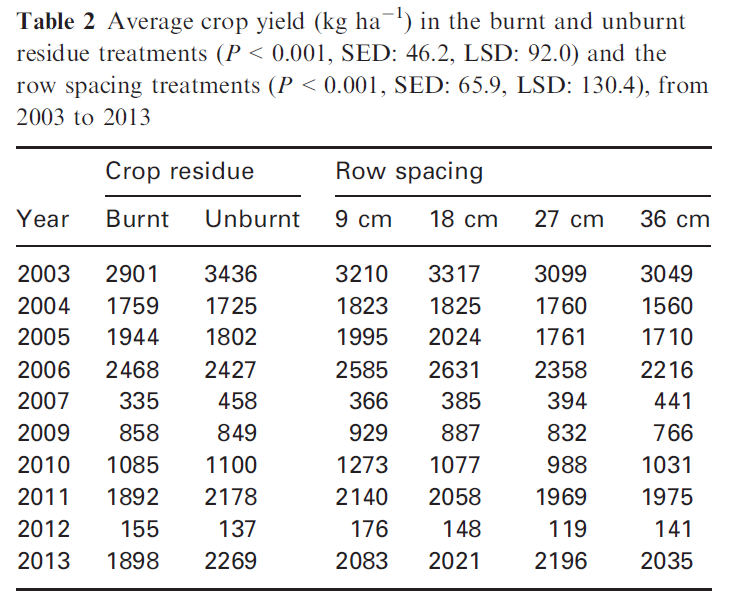 The data below shows the effect that burning stubble had on ryegrass seed set. Burning stubble destroyed some ryegrass seed and improved pre-emergent herbicide efficacy. There has been very little ryegrass present in the burnt plots of all row spacing treatments for several years, however, this has come at some yield cost as mentioned above.

Warm water
Mungbeans, you will never guess which row spacing is best!