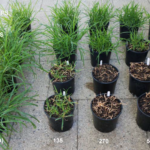 The Wright brothers spent a lot of time observing the curved shape of bird’s wings and how air flowing over this curved shape caused lift. This is one of the great examples of science mimicking nature.

Does nature ever mimic science?

If Crowsfoot grass can do it surely other weed species can too, so we may see other species with huge levels of glyphosate resistance in the future.

We previously reported in AHRI insight a population of Crowsfoot grass (Eleusine indica) in Malaysia discovered by Adam Jalaludin and others that was resistant to glyphosate, glufosinate and paraquat.  It is this population that contains the TIPS mutation.

Most herbicides kill plants by binding to enzymes. All plant enzymes are proteins. Proteins are made up of long chains of amino acids. These chains can be several thousand amino acids long. When a random mutation occurs, one of the amino acids in the chain is substituted with another one.

It gets deeper than that. A mutation may be described as Threonine 102 Isoleucine or T102I. This means that there should have been a Threonine amino acid in the chain at point 102, but instead there is an Isoleucine due to the mutation. 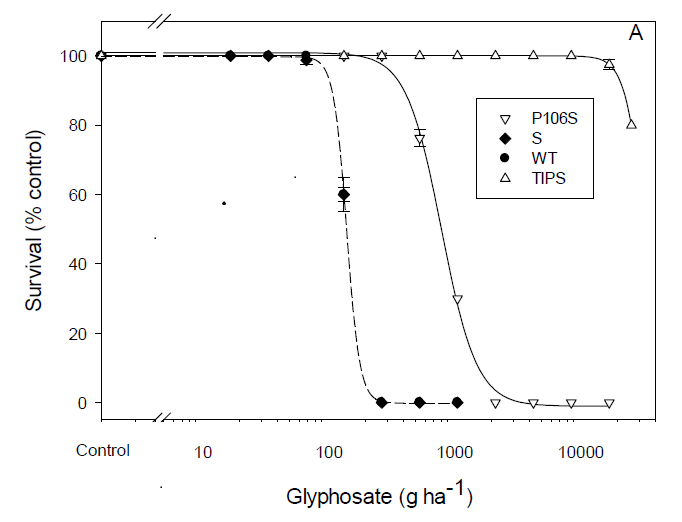 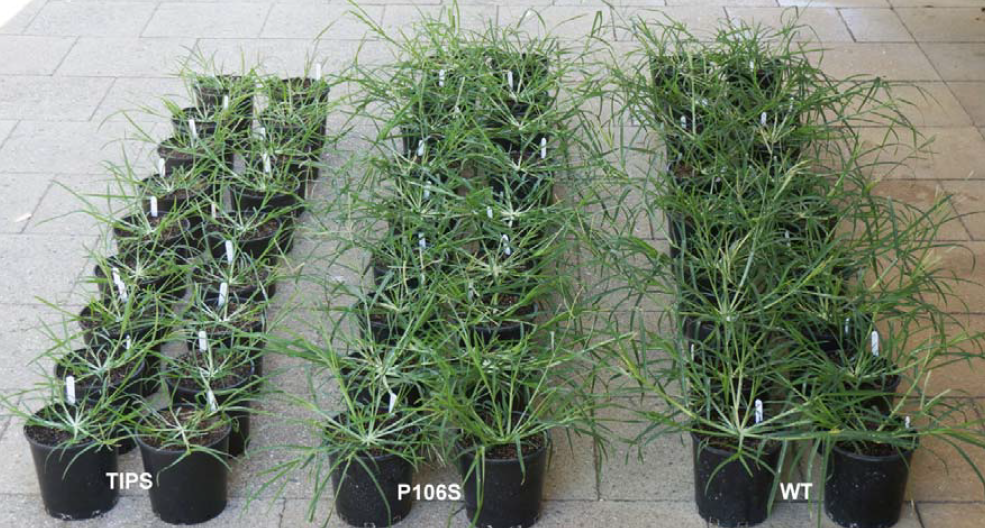 This photo shows the reduced growth of the Crowsfoot plants homozygous for the TIPS mutation compared to plants with just the 106 mutation (P106S) or the wild type (WT) plants with no mutation. No herbicide has been applied to these plants. There is little evidence of any fitness penalty for plants with the 106 mutation only.

The bad news is that plants heterozygous (one copy of the gene) for the TIPS mutation are as resistant as homozygous TIPS plants but may not have much fitness penalty.

How did it evolve?

So begs the question, how did a mutation with such a big fitness penalty evolve in nature? Normally, unfit plants don’t survive in a population because they cannot compete with the more vigorous plants around them.

The Crowsfoot grass in this study are from a palm tree nursery in Malaysia where herbicides are sprayed around palm plants that are being displayed for sale in polyethylene bags. Glyphosate was applied about once a month for several years to this population.

It is likely that this is sequential evolution of resistance. In other words, the plants evolved resistance first through the 106 mutation, and then with repeated applications of glyphosate they then evolved the 102 mutation as well. In this environment all of the susceptible weeds die so the resistant plants do not have to compete with other weeds for resources. Very high level resistance is an advantage to the plant in this situation because the plants survive high rates. The fitness penalty in the presence of herbicide doesn’t matter because all of the other weeds are dead (no competition).

Don’t be afraid to read on, we won’t go too deep into the molecular biology. This is such a great example of how target site resistance works, and it is worth understanding at a deeper level.

Firstly, let’s consider how the EPSPS enzyme is supposed to work.

There are two substrates that bind to the EPSPS enzyme – phosphoenolpyruvate (PEP) and shikimate-3-phosphate (S3P). 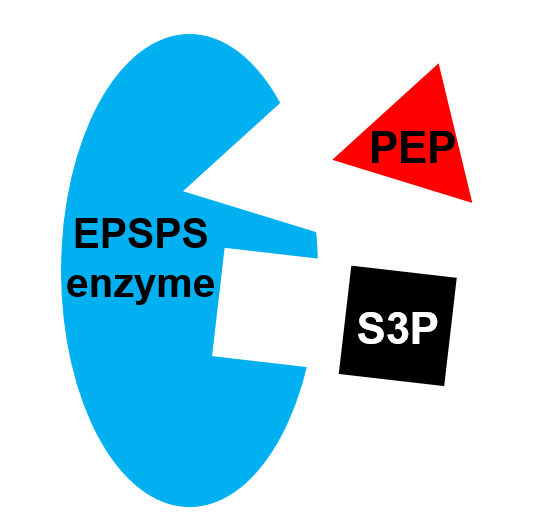 The substrates bind to the enzyme at their catalytic (active) sites. The enzyme works its magic and joins part of PEP to S3P to form EPSP. This molecule is one of the building blocks of aromatic amino acids. There are three aromatic amino acids. They are called aromatic amino acids because they contain an aromatic ring – an unusually stable nature of some flat rings of atoms. These structures contain a number of double bonds that interact with each other according to certain rules. As a result of their being so stable, such rings tend to form easily, and once formed, tend to be difficult to break in chemical reactions. 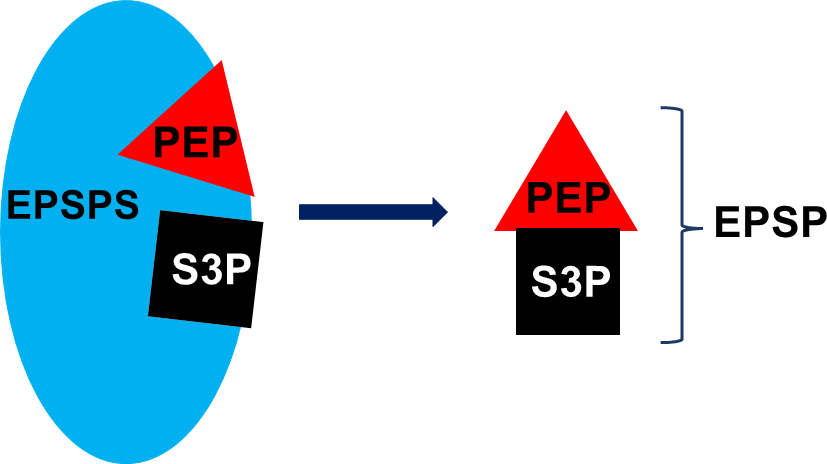 Glyphosate and PEP compete for the same binding site. 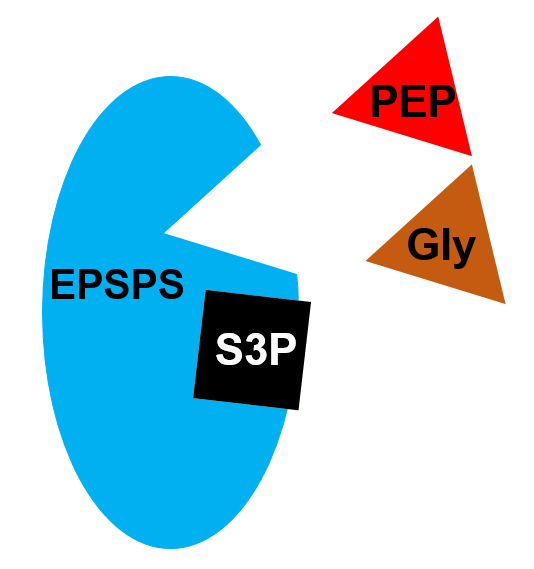 If glyphosate binds, PEP cannot bind and aromatic amino acids cannot be formed by the plant. The plant dies due to both starvation of these essential amino acids, and disturbance of the shikimate pathway (which may be involved in other pathways, such as lipid biosynthesis). 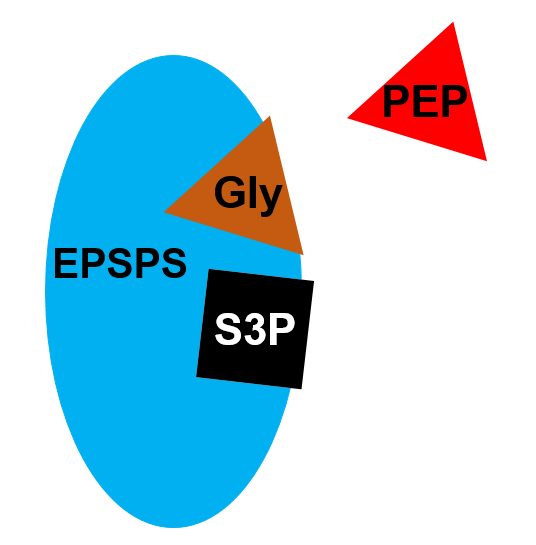 We need to remember that enzymes are 3D shapes. They contain catalytic (active) sites deep inside the enzyme where all of the action happens. PEP is trying to bind to its catalytic site. The 106 mutation occurs a short distance away from the binding site of PEP.  So PEP can still bind but glyphosate cannot bind very well. This mutation gives low level (5 fold) glyphosate resistance because glyphosate binding is restricted, it is not totally inhibited. If PEP could not bind we would call this a lethal mutation and the plant would die (for example, the 102 mutation alone). 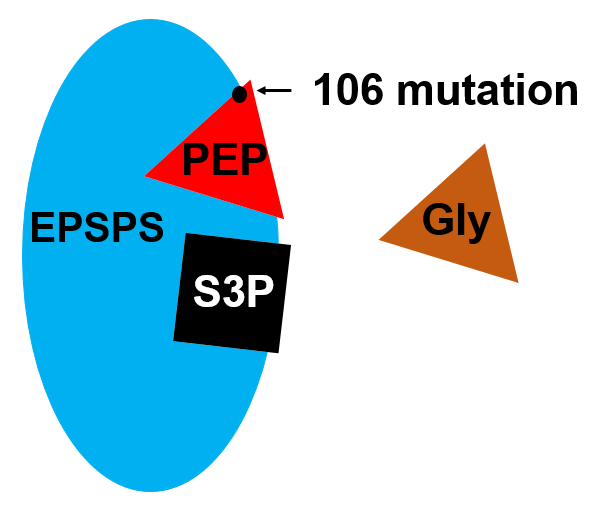 The 102 mutation occurs closer to the PEP binding site, right next to the 106 mutation. The combination of these two mutations (TIPS mutation) gives high level glyphosate resistance because glyphosate binding is severely inhibited. PEP can still bind but PEP binding is slightly inhibited. This is why there is a fitness penalty associated with this mutation. 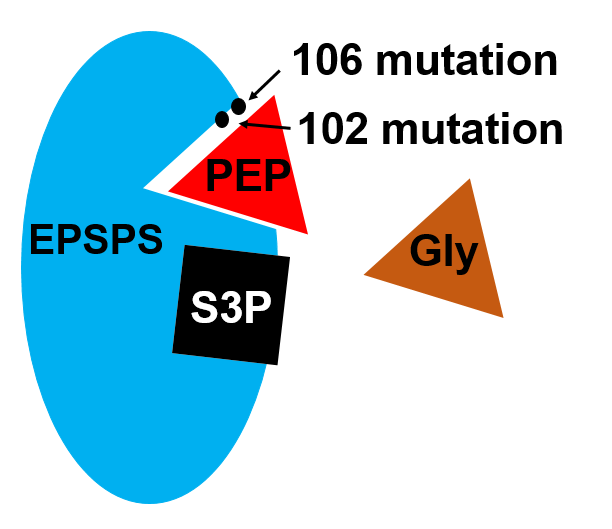 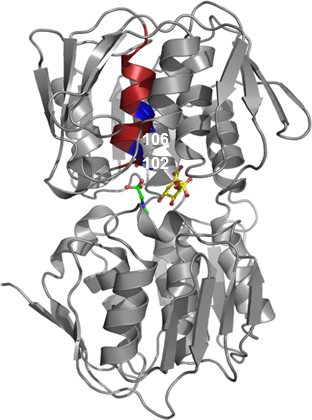 Waste
Chicken or the egg?