You are here: Australian Herbicide Resistance Initiative › Publications › 2021 › Assessing the Capability and Potential of LiDAR for Weed Detection 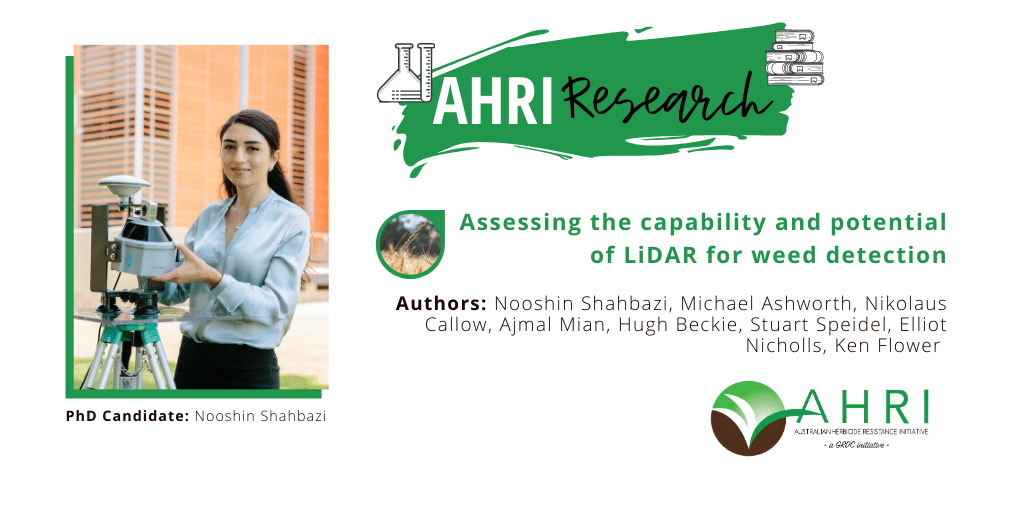 Conventional methods of uniformly spraying fields to combat weeds requires large herbicide inputs at significant cost with impacts on the environment. More focused weed control methods such as site-specific weed management (SSWM) have become popular but require methods to identify weed locations. Advances in technology allows the potential for automated methods such as drone, but also ground-based sensors for detecting and mapping weeds.

In this study, the capability of Light Detection and Ranging (LiDAR) sensors were assessed to detect and locate weeds. For this purpose, two trials were performed using artificial targets (representing weeds) at different heights and diameter to understand the detection limits of a LiDAR.

The results showed the detectability of the target at different scanning distances from the LiDAR was directly influenced by the size of the target and its orientation toward the LiDAR. A third trial was performed in a wheat plot where the LiDAR was used to scan different weed species at various heights above the crop canopy, to verify the capacity of the stationary LiDAR to detect weeds in a field situation. The results showed that 100% of weeds in the wheat plot were detected by the LiDAR, based on their height differences with the crop canopy.