Growers regularly employ in-crop management to reduce weed seed set thus minimising the number of seeds returning to the seed bank. While many growers are making a conscious effort to minimize weed seed set during the growing season they may be introducing seed back into the seed bank at seeding.

Across Australia is it common practice for farmers to grow and conserve their own crop seed rather than purchase it. However this crop seed can be contaminated with weed seeds, and if seed cleaning operations are only partially effective, then this weed seed may be sown into paddocks with crop seed in the following season.  Minimising the introduction of weeds into the farming system through sowing of clean crop seed is an important component of best farming practice. As well as adding to the weed burden already present, foreign seed contamination may also introduce unwanted species and herbicide resistant biotypes into farming systems with potentially serious consequences. Herbicide resistant annual ryegrass (Lolium rigidum L.), wild oats (Avena fatua L.), and wild radish (Raphanus raphanistrum L.) populations are widespread throughout the WA grain belt (Owen et al. 2007, Walsh et al. 2007, Owen and Powles 2009) and several studies have also identified high levels of weed seed contamination in crop seed in the seed box at seeding time (Powles and Cawthray 1999, Moerkerk 2002, Niknam 2002).

Recent research conducted by WAHRI ,(Pippa Michaels, Muresk), aimed to determine the extent of weed seed contamination present in crop seed sown by growers in WA and to understand the effect of seed source (i.e. farmer retained, certified seed) and seed cleaning techniques on the degree of contamination.  As part of this study, weed seeds infesting the crop seed were found to be herbicide resistant; therefore many growers are actually sowing resistant weed seed into their cropping paddocks.

During 2007/8 the study was conducted to quantify the extent of weed seed contamination in crop seed used for sowing. Farmers were asked a series of questions about seed cleaning methods, whether crop seed was cleaned prior to sowing and the source of their crop seed. A total of 183 grain samples (~10kg), of which half were wheat and half an alternative crop (i.e. barley, lupins, pea, canola and oats), were provided by 78 farmers from across the WA grain-belt (see sidebar).

Crop seed samples were cleaned by hand and the total weed seed contamination was determined. Weed seeds collected from the crop seed samples were then screened for herbicide resistance status using the most common herbicides used for the control of the particular weed species. Seedlings were sprayed at the 2-3 leaf stage and assessed for mortality 21 days after treatment.

Of the 78 farms surveyed, the majority of crop seed samples (97%) were cleaned before crop sowing. Nearly all (95%) farmers surveyed retained their own grain for crop seed, with only 5% purchasing external seed. Despite most farmers growing their own crop seed, the majority (69%) of crop seed was cleaned by external contract seed cleaners (either on farm contractors or seed cleaners in town). Wheat accounted for over half of the samples, followed by barley and lupins (in more northern regions).

In total, 74% of grain samples collected in this survey had some level of weed seed contamination even though 97% of farmers stated that they had cleaned their grain. Contamination levels were highly variable between samples with an average of 8.7 weed seeds per kg of crop seed (Table 1). The main contaminant weed was annual ryegrass (4.6. seeds/kg), which occurred in over half of all samples, followed by wild radish (2.0 seeds/kg), brome grass (Bromus sp) (1.0 seeds/kg) and wild oats (<1 w/kg), which were all found in approximately one third of samples. A number of other weed seed contaminates were found in the grain sample but at low levels (Table 1). Figure 1 shows that, as expected, annual ryegrass was the most frequent contaminant, followed by wild radish, brome and wild oat. Volunteer cereal and legume grains accounted for 15-18% of foreign material. There were at least 13 different weed species contaminating the grain samples surveyed. Most growers expected some level of contamination; however, the level of contamination expected was much lower than what was found.

Figure 1 Seed contamination as a proportion of total samples (183) 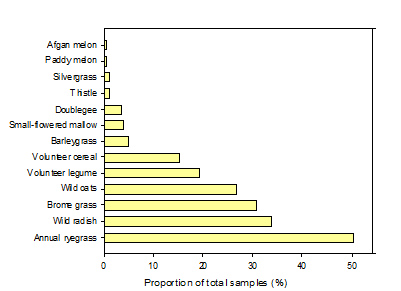 Weed seeds found contaminating the crop seed sample were tested for herbicide resistance with Group A and B herbicides. The majority of annual ryegrass seeds found in the crop seed were resistant to Group A – diclofop-methyl (84%) and Group B – sulfometuron (91%) (Table 2). Wild radish showed resistance to the group B herbicide chlorsulfuron. Wild oat showed resistance to the Group A herbicide diclofop-methyl, however, no resistance was found in brome grass to any Group A herbicide tested. Brome grass populations were not treated with Group B herbicides. The majority of wild radish resistant populations came from the more northern regions, while ryegrass resistance was spread across the whole state. This result is similar to that found in recent herbicide resistance surveys in WA (Owen et al. 2007; Walsh et al. 2007). All of the ryegrass populations resistant to the in-crop herbicides were controlled by the knockdown herbicide glyphosate (Table 2).

Cleaning methods used are also an important factor to consider, results showed there is a large difference in some of the cleaning methods. The trend was for gravity tables to be the most effective means, closely followed by rotary screens, sieves and a combination of methods, although on-farm hygiene, paddock selection and crop type may also influence contamination levels. Uncleaned crop seed had 22x more contamination that cleaned crop seed.

Please click on the photos below for high resolution versions.

Map of the Western Australian grain belt, showing the regions where samples were collected in 2007 and 2008.