A number of surveys have been conducted in the WA grain belt over the last 15 years to determine the frequency and extent of herbicide resistance in wild radish in our cropping regions. You can use the following links to view the corresponding wild radish survey information: 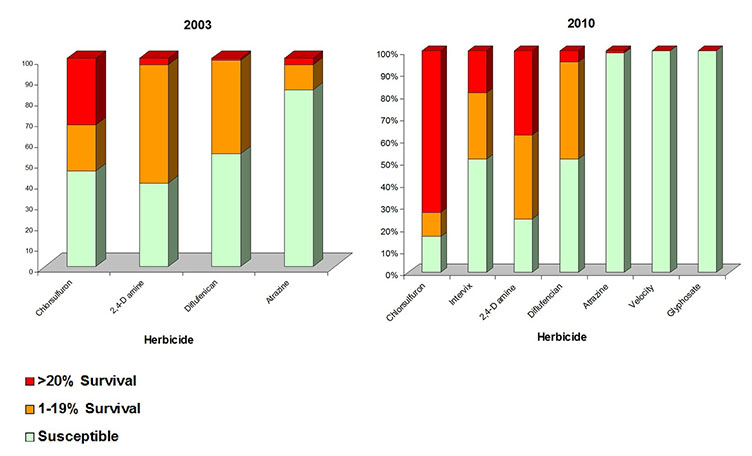 In 1999, the first herbicide resistance survey in WA was conducted in the northern, central and eastern areas of the WA wheatbelt to determine the extent of Group B herbicide resistance in wild radish. Over 200 crop fields were surveyed during the growing season (June-July), with 133 wild radish populations collected for testing to chlorsulfuron (Glean). Major findings included:

Over a 5 week period, at the end of the 2003 growing season (November and December), 90 wild radish populations were collected from  cropping paddocks across the WA wheatbelt and the results revealed that resistance to Group B herbicides had substantially increased since the previous survey. Populations were screened with chlorsulfuron, atrazine, 2, 4-D amine and diflufenican, with low levels of resistance found to the triazine herbicides and to diflufenican. Importantly, 60% of the populations showed some level of resistance to 2,4-D herbicide (Walsh et al 2007). Major findings included:

The latest survey (2010) was conducted to assess the current state of herbicide resistance to commonly used herbicides in the WA wheatbelt for five important weed species. Over 15, 000 km was travelled, extending from Binnu in the north of the State, to Esperance in the south, visiting 466 cropping paddocks in total. While previous surveys had been done randomly and anonymously, the 2010 survey required grower involvement. Paddock selection was still random to allow comparison with the data on resistance occurrence. Mature weed seeds were gathered at harvest from randomly selected paddocks on each grower’s property. During the 2011/12 growing season, wild radish seedlings were screened for resistance to commonly used herbicides including Glean, Intervix, 2,4-D amine, Brodal, atrazine, Velocity and glyphosate at recommended field rates. In total, 466 paddocks were visited with 96 wild radish populations collected at harvest Major findings included:

Herbicide rates used during resistance testing for samples collected during the 2003 and 2010 surveys.