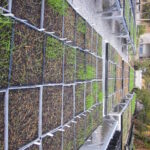 Wearing a seat belt reduces the risk of dying in a car accident. The seat belt is not perfect (people wearing seatbelts can still die in car accidents), however it does reduce the risk, particularly when used in combination with other safety technologies (like airbags).

In the same way, rotating herbicides is not perfect, but it does reduce the risk of resistance evolving, especially when combined with other weed management tools.

We received a lot of feedback and more research data on this issue since the last edition of AHRI insight, and we decided to follow up with a more complete summary.

There is more to the story.

If we combine herbicide rotation with other weed management tools, including non-herbicide weed control, we are still in the game.

This is why herbicide rotation and the double knock are still a good idea.

In the last edition we reported that ryegrass can develop resistance to both glyphosate and paraquat despite rotation between the two herbicides.

Let’s set the record straight. We strongly believe in herbicide rotation. The message from the last edition was that if we only rotate herbicides, we are in a lot of trouble.

Glyphosate and paraquat multiple resistance has occurred several times in the past in ryegrass where there was over-reliance on these two herbicides without diversity and without follow up control.

In a nutshell – summary of research

There was no double knock

Given that the researchers found two separate genes endowing resistance to glyphosate or paraquat there are two possibilities as to how multiple resistance occurred;

So what do we do with this information?

If the double knockdown was used every year at lethal rates we are confident that resistance would have been a low probability. However, this ‘ideal world’ situation is difficult to achieve in real life.

The double knock of herbicide followed by another form of weed control e.g. mowing in pasture seed production, sheep grazing among grape vines etc. is achievable and sustainable.

Rotating between glyphosate and paraquat, then following up with other weed management is likely to significantly reduce / delay the evolution of resistance. Perhaps the bigger benefit of this system is the reduction in the weed seed bank that will result.

There is more paraquat resistance around than you may wish to believe. Back in the 1980’s Prof Powles documented many paraquat resistant barley grass populations in Victoria. Recently, Dr Chris Preston took 39 samples of ryegrass from pasture seed growers and found 9 populations that were resistant to paraquat. What is possibly even more alarming is that Chris showed that 50% of barley grass samples collected from Lucerne fields in South Australia in 1999 had resistance to paraquat.. Barley grass has evolved this resistance to paraquat in the pasture seed industry where paraquat is used as a winter cleaning spray. The reasons for this high frequency of resistance are due to mowing being less effective on early seeding barley grass and there are also genetic reasons due to barley grass being a self-pollinator. This will feature in a future AHRI insight.

Fortunately we have only seen paraquat and glyphosate multiple resistance evolve in ryegrass in Australia. Indeed, paraquat and glyphosate still work in most parts of Australia. With diversity, these knockdown herbicides will still be very effective on a broad spectrum of weeds for many years to come. However, we must develop robust, diverse systems and be vigilant to avoid disaster in the weeds that are prone to multiple resistance.

Keep rotating, but with diversity.