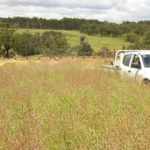 Michael Whitney was an opportunist. He just happened to be playing county cricket in England when all of the Australian bowlers went down with an injury during the 1981 Ashes tour. He got the call-up to fill in and play for Australia and he grabbed that opportunity with both hands, turning it into an Australian international cricket career. Talk about timing!

Stopping ryegrass seed set pre-harvest in canola is all about timing. Sometimes the timing window lines up, other times it does not. Glen Riethmuller, DPIRD Merredin has a knack for choosing the most difficult, most labour intensive research trials to undertake. Between 2010 and 2013 he, along with Abul Hashem and Catherine Borger investigated ryegrass seed set control pre-harvest in canola. They investigated the practice of spraying under the swather as canola is windrowed for harvest compared to crop topping (desiccation) spraying over the top of the canola. At the time glyphosate was not registered for this practice and this research contributed to this registration. For this reason, these research results were not made available until after the registration process was complete.

The researchers found that glyphosate can be effective either as a spray swath or crop topping treatment and that the other registered herbicide, diquat (Reglone®) is sometimes effective when the ryegrass is at the right stage but results were variable. Sometimes all of the ryegrass seed set control treatments work, sometimes none of them work. Timing is everything.

Spraying under the swather as the canola is windrowed for harvest has become a common practice in Australia to stop seed-set of ryegrass and other weeds.  This has become particularly important to help control late emerging weeds.  Pictured below is the spray swathing set up that was used for this research.  It is a MacDon 3020 PTO swather with 7.6m cut and Brando Hill spray kit attached with Spraying Systems Floodjet TK-.75 nozzles 50 cm apart working at 1.0 bar giving 340 mL/min, 75 L/ha water at 5.4 km/h. 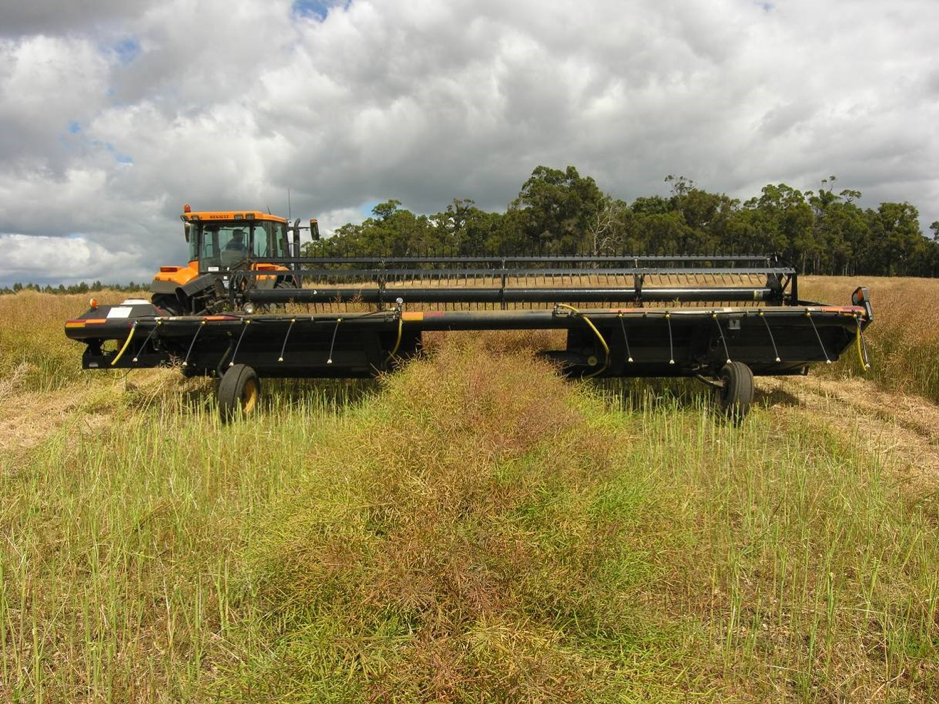 As with crop topping, timing is everything with spray swathing.  The results of this trial were not particularly exciting with roughly 50% ryegrass seed set control achieved with many of the treatments.  What it does show is that spray swathing and crop topping (desiccation) can be equally effective as one another.

Desiccation with diquat was quite effective in this trial, reducing viable ryegrass seed production by 65% but diquat under the swath was less effective.  Swathing alone gave about 43% ryegrass seed set control, similar to the level of control achieved with the glyphosate treatments.

The 2011 trial at Mt Barker showed that glyphosate applied as a desiccant at high rates late was generally more effective than the spray swathing treatments. 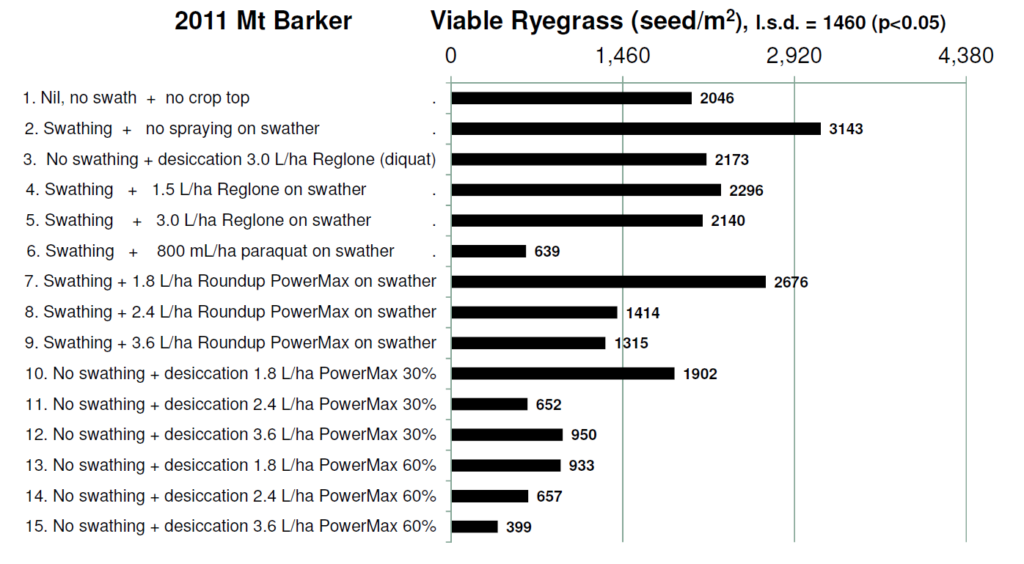 Paraquat under the swath

Paraquat is not registered for pre-harvest weed control in canola and is not an option. Research has shown that paraquat residues above the maximum residue limit (MRL) of 0.01ppm have been found in canola grain when paraquat was applied as a spray under the swath.

Crop topping / Desiccation – Timing is everything

Several years ago I was visiting farms in spring giving recommendations to grain growers about crop topping of lupins for ryegrass control.  Some paddocks were good to go with milky dough ryegrass and lupins at the right stage, and other paddocks just down the road were not.  The ryegrass was past the ideal timing.  The same is true for crop topping of canola.  Sometimes the timing window opens up and other times it does not.

In 2012 nothing worked. The 2012 at Katanning trial had low ryegrass numbers and the researchers commented that the ryegrass appeared too advanced at the time of spraying for crop topping treatments to be effective.  The results below show that all treatments were ineffective. 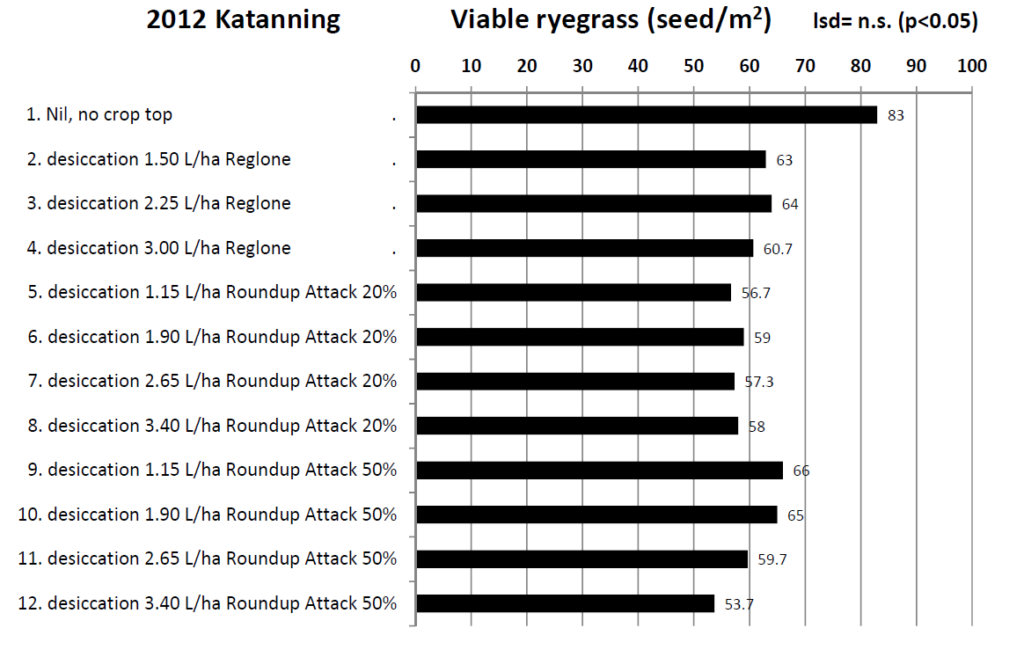 The ryegrass was at the ideal timing as the canola seed changed colour in this trial and everything worked, even Reglone!  This trial also included some different water rates which had no effect on efficacy. 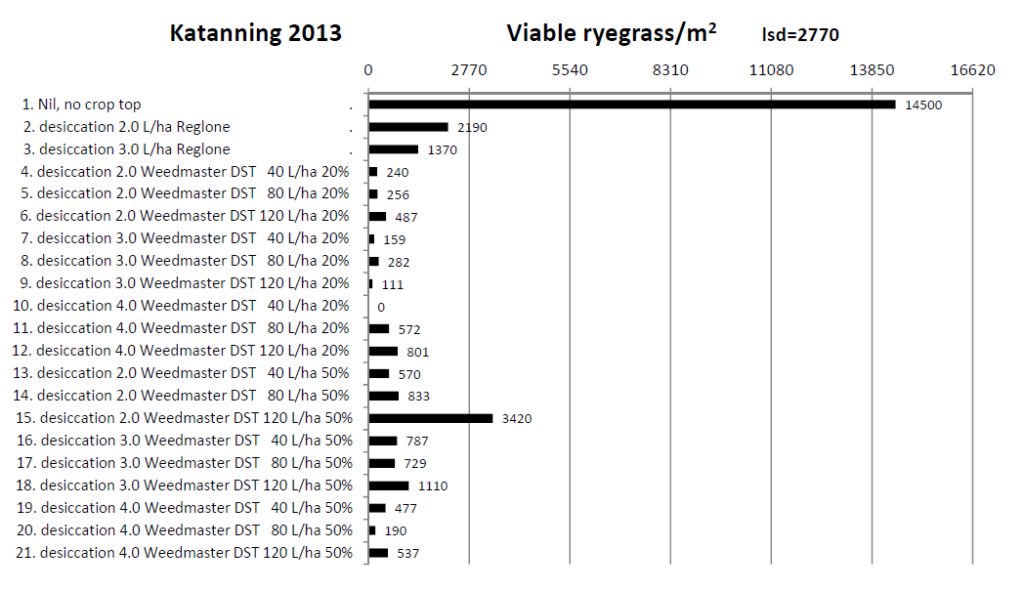 There are two glyphosate products registered at the pre-harvest timing in canola, Weedmaster DST from NuFarm and Roundup UltraMAX from Monsanto (now Bayer).  You will notice in the results above that the Roundup Attack was used in the trials.  Roundup Attack is now sold as Roundup UltraMAX.  Roundup PowerMAX was also used in this research but is not registered for this practice.

Paraquat is not registered in canola, and diquat is often ineffective at this late timing.  If the ryegrass is flowering to water ripe, diquat may be an option, but more often than not it seems that glyphosate will be the product of choice for pre-harvest weed seed set control in canola.  Clearly, this represents significant selection pressure for glyphosate resistance, which is why Greg Condon has coined the term the ‘Canola Combo’.  That is the double knock of glyphosate applied as a crop topping or spray swathing treatment followed by harvest weed seed control.

Sometimes the crop topping or spray swathing timing lines up perfectly and the weeds are at a vulnerable stage when the crop is ready to be sprayed and/or swathed.  In this situation it almost doesn’t matter what you do, almost everything works.  In other situations, however, the weeds are very advanced when the crop is ready and nothing works particularly well.  Crop topping (desiccation) and spray swathing of canola are excellent practices when the timing window is open.