You are here: Australian Herbicide Resistance Initiative › News › The herbicide mixture is greater than the sum of herbicides in the mix
0
0
0
0
December 1, 2020 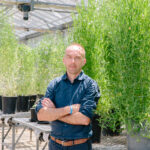 “The whole is greater than the sum of its parts,” Aristotle.

AHRI researcher, Dr Roberto Busi is no philosopher, but he has recently published some significant research that shows that Aristotle knew a thing or two about herbicide resistance despite being born over 2000 years before the first herbicide. Amazing! The message from this research – never assume that a herbicide mixture will fail even if there is resistance to both components of the mix.

This research was supported by GRDC and involved cooperation between a team of agronomists and 58 farmers to sample ryegrass from 140 fields followed by extensive herbicide resistance testing. It confirms what other, smaller studies have shown in the past, that herbicide mixtures are a powerful tool against resistant weeds. For example, 34% of these ryegrass populations were developing resistance to trifluralin and 11% of them were developing resistance to Avadex®, yet when these two herbicides were combined in a mix, there was no resistance detected at all. A similar result was seen for all pre-emergent herbicide mixtures. Spoiler alert – for all pre-emergent herbicide mixtures no populations were rated as resistant to any of the mixtures. 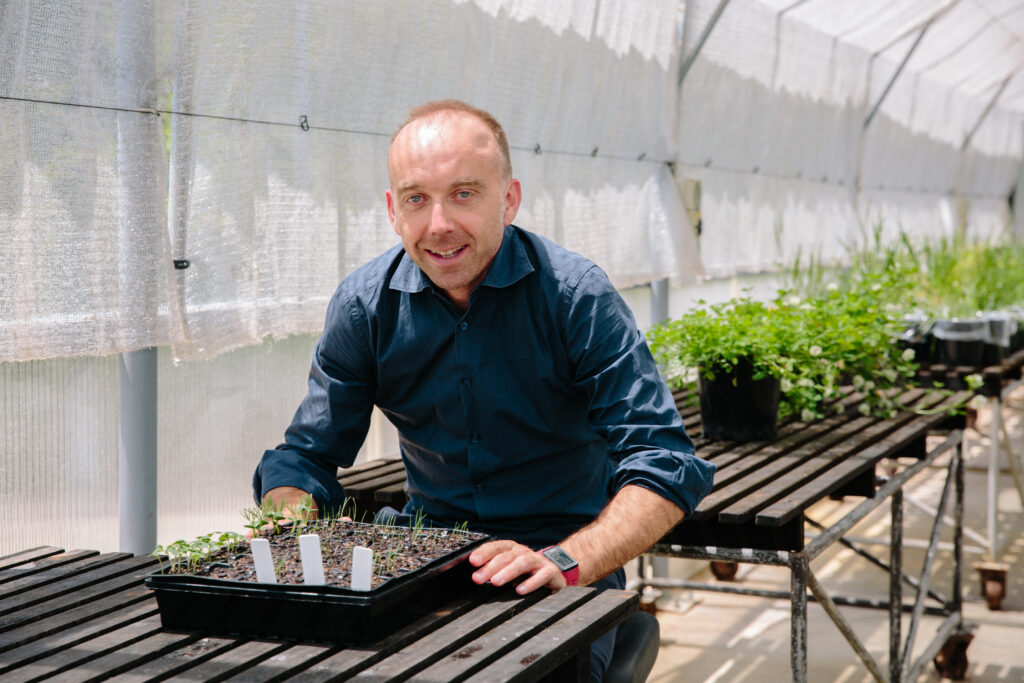 In June 2019, Roberto reported that herbicide mixes were very effective on ryegrass from 17 populations sampled from Western Australia. We reported on it here.

It was exciting to see this positive research, but how could we be sure that this effect would hold true across more populations? GRDC supported an extension of this research and Roberto set about teaming up with farmers and agronomists to collect 140 annual ryegrass samples from around the Western Australian wheatbelt.

Let’s start with a mix of two Dims – clethodim and butroxydim. The chart below shows that despite significant resistance to both dims when applied individually, the mix was highly effective. You may argue that this is simply a rate effect and that is definitely part of the story, but there is more to it than that. It appears to come down to specific variations in the target site mutations that occur. Some mutations give higher levels of resistance to clethodim and others to butroxydim. Suffice to say that the mix was very effective and is the hardest legal hit that we can give ryegrass post emergent with Group A herbicides. 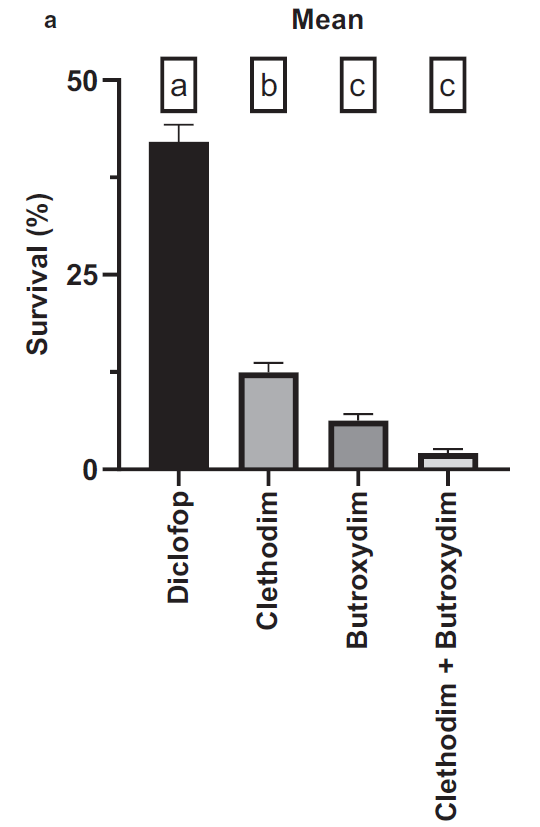 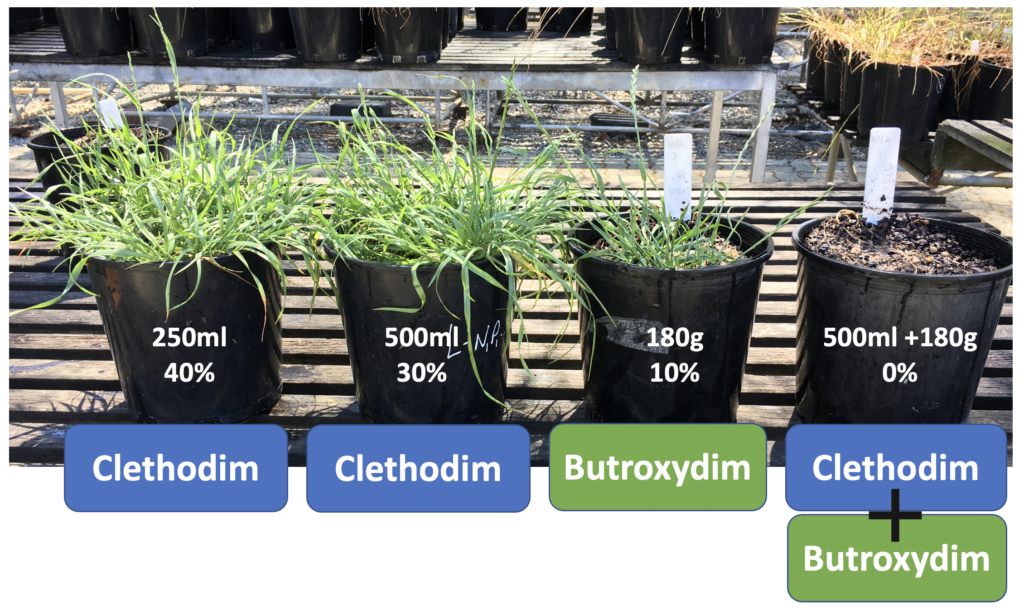 All of the pre-emergent herbicides were applied at label rates, details can be found in the final table at the bottom. In most cases, ryegrass seed was placed on top of the potting mix in the pots, the herbicide was applied, then covered with another 10mm of potting mix.

For dramatic effect we’ll go through the mixtures one at a time.

Trifluralin + Arcade – despite significant resistance being present to both of these herbicides, the mix was very effective. This may be party due to the P450’s involved in these resistance mechanism – see here.

Trifluralin + Sakura – plenty of field research has demonstrated this to be a good mix for efficacy and this study confirms that the mix is also excellent at overcoming low level resistance.  It is alarming to see that 13% of the populations have developing Sakura resistance, but encouraging to see that this mix achieves excellent results.

Trifluralin + Avadex – Boom! Essentially nothing survived this mix despite these being old herbicides with significant levels of resistance.

This one is getting a little on the expensive side, but very effective, nonetheless.

Once again, no survivors here but also a little on the expensive side. This has also proven effective in field trials. In the past we have reported on research showing cross resistance between Sakura, Arcade and Avadex and have advised to mix and rotate with other groups of herbicides. We still stand by this research, but we must admit that we were pleasantly surprised with these results. This may be as simple as the higher dose of herbicide overcoming the relatively low level, metabolic resistance. While our first preference is to mix and rotate with other herbicide groups, we are also comfortable with mixes such as this one given the excellent results.

The chart below summarises all of the data above, but this time it’s expressed as average ryegrass survival % across all of the 140 populations. Very impressive to see that all mixtures achieve better than 99% ryegrass control. We must keep in mind this is conducted in ideal conditions in pots and we are unlikely to see this level of control in the field. 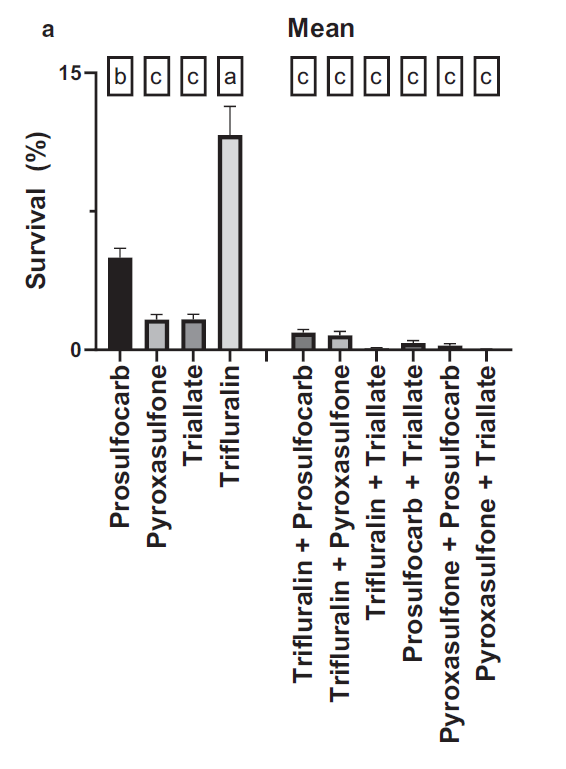 The table below summarises all of the data above, including herbicide rates. Survivors here are percent of populations that are resistant or developing resistance.

The future of herbicide application is using effective mixtures, and or sequences of herbicides, and this should also be the future of herbicide resistance testing. Herbicide mixing is not the complete answer to all of our weed problems, we still need to take a diverse approach, but it’s very clear that mixtures can be a lot more effective than single herbicide applications, and our modelling also suggests that mixture will help herbicides to last longer before resistance evolves. Mix and rotate.

P.S. Aristotle actually said, “In the case of all things which have several parts and in which the  totality is not, as it were, a mere heap, but the whole is something besides the parts, there is a cause; for even in bodies contact is the cause of unity in some cases, and in others viscosity or some other such quality.” But that was a little lengthy for the start of AHRI insight!

Thanks to our partner agronomists and farmers

A special thank you to the agronomists Geoff Fosbery, Brad Joyce, Garren Knell, Trent Butcher and Ben Whisson for their involvement and collection of the 140 samples and a big thanks to the 58 farmers involved.

Are herbicide mixtures unaffected by resistance? A case study with Lolium rigidum