As Darkan farmer and inventor of the Harrington Seed Destructor, Ray Harrington, aptly says, “Harvest weed seed control is a pain in the ….” – but it is an imperative tool in continuous cropping systems”.

The only rule Ray Harrington has in farming is that there are no rules. He says that you have to be willing to do whatever it takes to stop weed seeds entering the seed bank.

Many growers and advisers are asking the question, “Should I windrow burn, buy a chaff cart, or wait for the Harrington Seed Destructor”? We now feel that we have a lot of information that can help with this decision.

Know all about how these systems work but want to explore the cost? Click here to skip to the financials section. If not, or you’d like a refresher, keep reading!

Harvest weed seed control tools – where do they fit?

Below, we briefly explore the harvest weed seed control options currently used across Australia to capture and/or destroy weed seeds at harvest.

This HWSC system consists of a chaff collection and transfer mechanism attached to a grain harvester, capturing the chaff fraction in a tow-behind cart (Figure 1). The chaff cart has been shown to achieve the collection and removal of high proportions of seed from crop-infesting populations of annual ryegrass, wild radish and wild oat.

Typically, the collected chaff is then dumped in chaff heaps in lines across fields in preparation for subsequent burning to achieve weed seed destruction. Alternatively, chaff material is a valuable livestock feed source and can be grazed in-situ or, in some instances, collected for use in feedlots.

Western Australian grain grower Lance Turner pioneered the elevator delivery system in the chaff cart (from the original blower transfer system) (Figure 1). This approach significantly improved chaff delivery into the cart, making the chaff cart much easier to use. The elevator system is now available on commercially sold chaff carts.

The simple but effective narrow windrow burning system is currently the most widely adopted HWSC system in Australia. This system uses a grain harvester mounted chute to concentrate all of the exiting chaff and straw residues into a narrow windrow about 500 to 600mm wide (Figure 2).

These narrow windrows are subsequently burnt under the right environmental conditions to avoid burning the entire paddock (Figure 2). The concentration of chaff and straw residues increases the duration and temperature of burning, as the higher the temperature, the more weed seeds destroyed. Narrow windrow burning has been shown to kill 99% of weed seeds for both annual ryegrass and wild radish in wheat, canola, and lupin chaff and straw residues.

Western Australian grain growers Andrew and Rod Messina have perfected this HWSC technique and burn around 10,000 ha of narrow windrows every autumn, giving them the advantage of dry sowing their crops.

Figure 2. Narrow windrows formed by a chaff chute mounted on the rear of
the harvester (left) are then later burnt in autumn (right).

The Bale Direct System developed by the Shields family at Wongan Hills consists of a large square baler directly attached to the harvester that constructs bales from the chaff and straw residues as during harvest (Figure 3).

This system serves to both capture weed seeds and bale harvest residues for livestock feed. AHRI studies determined that 95% of annual ryegrass seeds are collected and removed from fields using this system. However, the availability of suitable markets for the baled material has limited the adoption of this system by Australian growers. 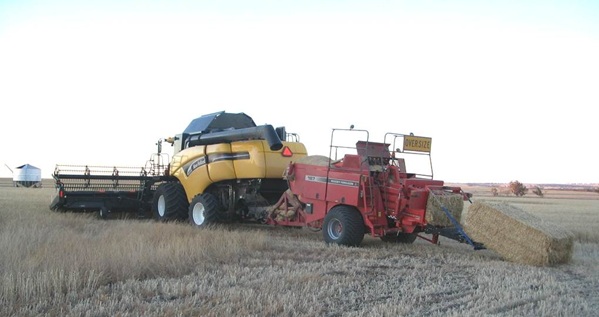 It is important to take a long-term approach to weed control. This is where the real value of HWSC systems become apparent – as part of a system including both early-season weed control practices (herbicides etc.) on weed seedlings and HWSC on late-season mature seed bearing weeds. 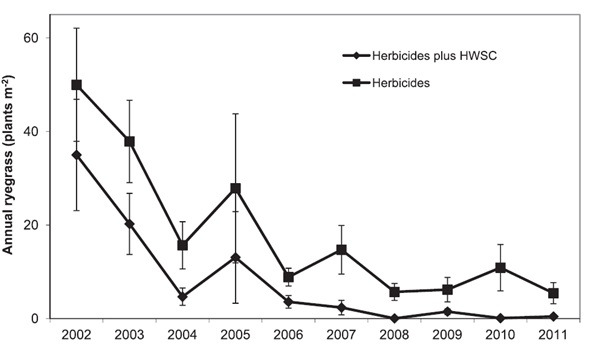 How much do they cost?

A tool such as narrow windrow burning may appear inexpensive on face value, however, when the cost of nutrient removal (mainly N & K) is included the true cost of this practice increases. The HSD appears very expensive on face value, however, given that there is no nutrient removal with this practice, the cost of this machinery is relatively similar to other options if the capital cost is averaged over a large enough harvest area. The cost of the bale direct system can be re-couped, and in some cases profit made when bales are sold.

For more information about costs and to download the factsheets, click on the ‘workshop downloads’ link below.