Most of us are a bit slow out of bed on a cold morning and take a little while to get moving. Weeds are no different. Some glyphosate resistant weeds become less resistant in cool weather.

The good news? If you know that the resistant weeds you are spraying have the reduced translocation mechanism, then spraying in cool weather may help.

The bad news? There are multiple mechanisms of glyphosate resistance so it is difficult to know which one you are dealing with.

Annual ryegrass (Lolium rigidum), a C3 plant, is a common winter weed of Australian winter grain crops. Johnsongrass (Sorghum halapense), a C4 plant, is a common crop weed in sub-tropical areas of Argentina. Given these differences, both weeds have different optimal growing temperatures. In this study, two glyphosate resistant populations of Johnsongrass and annual ryegrass from Argentina and from Australia, respectively, were tested.

The graph below shows the dose response curve of glyphosate applied to annual ryegrass. Similar results were observed for Johnsongrass. 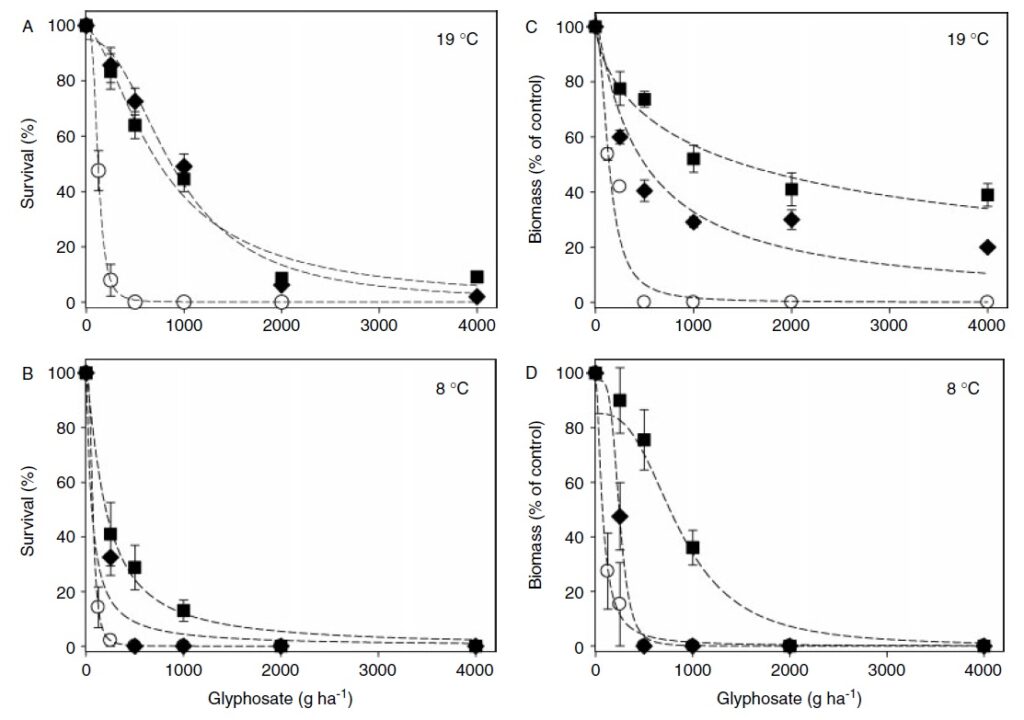 What does this mean for resistance evolution?

This research suggests that it is less likely for weeds to evolve the reduce translocation mechanism of glyphosate resistance in cool climates than in warm climates where optimal growing temperatures are experienced. This may partially explain why many Johnsongrass populations in Argentina have evolved resistance to glyphosate in the sub-tropical agricultural areas but not in the temperate-cold cropping areas.

What about other weeds?

Some previous research by Doug Sammons’ research team at Monsanto demonstrated similar results in Fleabane / Horseweed (Conyza canadensis). In this research, the reduced glyphosate translocation mechanism was due to increased vacuolar glyphosate sequestration. A vacuole is an organelle that can be found in all plant cells. Its main functions include disposal of waste products and isolating materials that may be harmful to the cell. In this case, the resistant plant moves the glyphosate into the vacuole where it is not active. This resistance mechanism was also found to be less efficient at low (<10oC) temperatures.

What are the implications?

As previously mentioned, it is difficult to use this information to improve the control of glyphosate resistant weeds unless the specific resistance mechanism is known. In this study, plants were grown at the various temperatures for the duration of their life, so it may not be a simple as recommending spraying on a cool morning. However, it may be possible to improve control of glyphosate resistant weeds by spraying glyphosate in the cooler months of the year and avoiding glyphosate in the warmer months. Similarly, this approach may reduce the evolution of glyposate resistance.

Is there a fitness penalty in Group B resistant weeds?
How do P450 enzymes cause resistance?