When you drink alcohol, it is broken down by P450 enzymes. This is one of the processes by which your body detoxifies the alcohol so it doesn’t kill you. We all have these enzymes, although some of us have more than others – which is why some people are a cheap date, while others are not so.

In AHRI, we have known for some time that P450 genes are involved in metabolic herbicide resistant ryegrass, but we had no idea which genes were responsible, or how they were inherited from one generation to the next.

AHRI researcher Todd Gaines (now Assistant Professor at Colorado State University) in collaboration with Bayer CropScience in Frankfurt, led this AHRI research. In this work the team found genes of 57 different P450 enzymes in everyday ryegrass. The genes of two of these P450’s were ‘turned up’ in resistant ryegrass. This allowed the resistant plants to produce more P450 and survive the herbicide Diclofop. The susceptible ryegrass in the study also had the P450’s that cause resistance, it’s just that these genes were ‘turned up’ only in the resistant plants.

Turning on resistance genes is like cranking up the dimmer switch.

This molecular biology research project conducted at AHRI and Bayer CropScience in Frankfurt set out to determine which genes were responsible for metabolic resistance. Todd Gaines travelled to Germany on a Bayer-AHRI collaboration for the key molecular research.

Our job as the AHRI communications team is to simplify scientific research and ensure it is relevant to our readers. But we’ll be honest. We read this paper and it’s complicated. Way over our heads. So we asked Todd and he put it into simple terms for us (thanks Todd!). 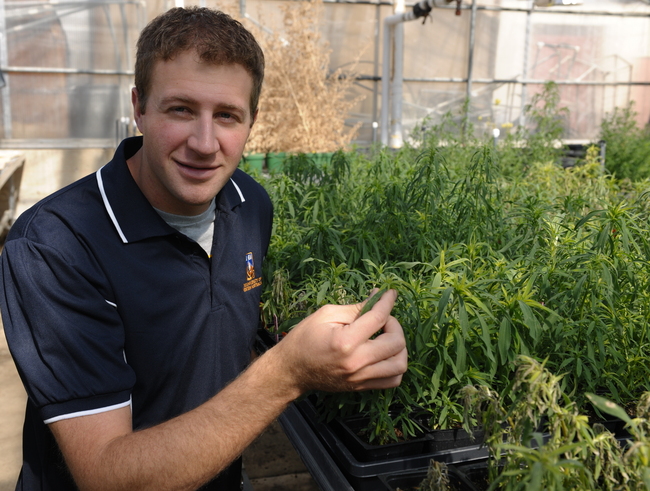 We loved Todd’s simple explanation so much that we’re sharing it here with you:

“Here’s how I would put the whole study in easier terms. If you want a light in your room, you can install a simple on/off switch. Flip it on, you’ve got bright light. Flip it off, the light goes out. Easy as. You can also get fancy. You can install a dimmer switch. Maybe you want really low lights to save on the electricity bill. Maybe you want some mood lighting. Sometimes you want the full light. You can have it all, but it’s a little more complicated.

“The expression of these genes is like the dimmer switch. Normal ryegrass is like a stingy person, it has the dimmer switch (for the metabolism genes such as cytochrome P450, NMO, and GT), and it just barely turns it on. Just a little bit is all it needs.

“Ryegrass with metabolic resistance takes that dimmer switch and turns it all the way up. Each gene is blazing away, because that switch is cranked full on.

“Herbicide selection pressure over time has favoured ryegrass that has higher expression of these genes, because these genes encode proteins that break down the herbicide and enable the plant to survive. The more the gene is expressed (turned up), the more protein there is, and the more herbicide the plant can break down to non-toxic forms. The amount that the dimmer switch is turned on is under genetic control. Remember, all ryegrass has the same lights, the difference is how much they’re turned on.

“This is different from gene amplification. In that case, it’s like the plant has on/off switches, but it’s installed 18 lights instead of 1.

“What we found, was which genes were cranked up. We knew ryegrass had a lot of P450s (we identified over 57 in our reference), but we didn’t know which ones were turned up. Now we’ve identified the same P450 genes in many different resistant populations. We also found a gene called NMO (we aren’t sure yet what exactly it does to a herbicide), and a gene called GT (it probably operates the second step after the P450).”

The other part of this research involved using 2,4-D to ‘turn on’ metabolic resistance genes. Grass weeds like ryegrass tolerate 2,4-D by metabolism. Enzymes such as P450’s detoxify 2,4-D so it doesn’t harm the plant. AHRI work by Dr Heping Han sprayed Diclofop susceptible ryegrass with 2,4-D and then a short time later, sprayed the plants with Diclofop. This pre-treatment with 2,4-D allowed the susceptible ryegrass to survive Diclofop that was applied shortly after. Seven genes were induced by this 2,4-D. 2,4-D effectively turns these genes on and tells the plant to produce a lot of enzyme. It just so happens that some of the enzymes that detoxify 2,4-D, also detoxify Diclofop.

Take it away Todd!

“The 2,4-D story is like this – 2,4-D is a signal to the plant to go ahead and crank up that dimmer switch and get those lights blazing. We don’t know exactly how that signal works, but it does. Also, the offspring of the plant that has turned up the switch because of 2,4-D do not inherit the increased expression. They go right back to having the switch on low (so farmers should not worry about “causing resistance” when they spray 2,4-D; if it’s not inherited, it’s not resistance).

“What are some of the applications of this research?

“Now that we think we have identified some (definitely not all yet) of the genes involved in metabolic resistance, we can start working towards some new goals: 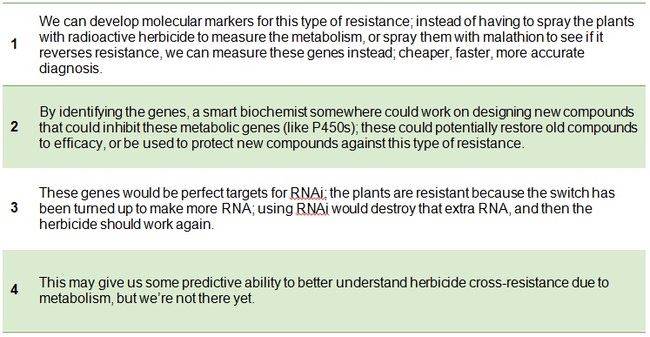 “These cool-sounding “resistance-breakers” only work for these exact genes. Other populations may have different genes that have been turned up, and then there’s always target-site resistance. Baby steps, I guess?”

This is high level science that may not have direct application right now, but is extremely important in the development of future technology to combat resistant weeds. It’s early days, but this research (and more like it) will hopefully lead to the development of new technology. In the short term, it will help us do a better job of rotating our current herbicides.