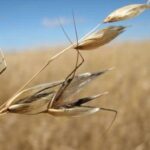 Why is it that we can often kill wild oats (black oats) with grass sprays but the ryegrass in the same paddock evolved resistance to these herbicides years ago? The answer is in the genes.

Ryegrass is like we humans – it must cross pollinate to reproduce and it has two copies of each gene (diploid).

Wild oat is more like wheat – it mostly self-pollinates (88 to 100% self-pollination) and it has six copies of every gene (hexaploid).

A single gene mutation can cause ryegrass to be resistant to a grass herbicide but it will have only a minor effect on wild oats. This is because the resistance gene in wild oats is diluted by the susceptible genes due to there being six copies of each gene. This was poorly understood until AHRI researcher Dr. Qin Yu and PhD student Saiful Hamdani took it on to explain this phenomenon to the rest of the world.

Another good reason to keep herbicide rates up!

Identifying and understanding herbicide resistance and its evolution in hexaploid plant species such as Wild Oats is more challenging than in diploids such as annual ryegrass. Dr. Qin Yu et. al. studied resistance to Diclofop Methyl (Hoegrass) in hexaploid Wild Oats.

In ryegrass, a single gene mutation (such as 1781, 2078 or 2088) confers high levels of resistance and the plant survives the herbicide. The same single mutation in wild oats results in only low level resistance. Wild oats with a single gene mutation produce 1/3rd resistant ACCase enzyme and 2/3rds normal, herbicide sensitive ACCase. This is because wild oats are hexaploid and therefore have multiple copies of the gene responsible for making the ACCase enzyme. Consequnetly, a wild oat plant with a single gene mutation still produces a lot of herbicide sensitive ACCase that the herbicide can bind to and kill the plant. In addition to this, wild oats mostly self-pollinate which slows down the rate at which these genes spread throughout the population.

In a previous study, a population of ryegrass containing a single resistance mutation (2078 or 2088) survived the field rate of clethodim (Select), but the hexaploid wild oat, possessing the same mutation, rarely survived the herbicide at the same or lower rates. Thus, the majority of wild oat plants that had a gene mutation were killed by the herbicide, did not set seed, and therefore the resistance genes could not be passed on to future generations.

There is a lot more to this research that is not mentioned above. Follow the PDF links below for further information:

Do Monsanto have the next big thing?