You are here: Australian Herbicide Resistance Initiative › News › 2,4-D resistance does not affect the fitness of radish
0
0
0
0
December 12, 2019 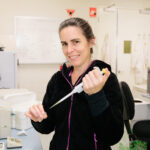 Merv Hughes was not a fit-looking cricketer. Merv was a notorious consumer of food and alcohol, and it showed! Despite this, he was a successful professional sportsman. Mitchell Johnson, on the other hand, was the epitome of a fit, healthy fast bowler. But who had the better bowling average? You guessed it, big swervin’ Mervin!! 28.38 compared to Johnson’s 28.4. Ok, we’re splitting hairs here, but you get the picture, how fit you look is only part of the story.

If you grew 2,4-D resistant radish in pots on its own, and compared that to the good old susceptible radish of yesteryear, you would find that the resistant ones are a bit smaller overall, slightly shorter, have smaller leaves and they are slightly more dormant so they germinate a bit later.

You would think that all of this would add up to a less fit wild radish plant that is less competitive with our crops.

That’s exactly what AHRI researcher, Dr Danica Goggin, thought when she observed these differences in her research to work out how 2,4-D resistance works. So she studied it.

Danica grew wild radish either in pots on their own or in pots with five wheat plants to compete with.

Wheat won! By the length of the straight.

The resistant and susceptible wild radish plants were equally smashed by the competition from wheat. Five wheat plants in a pot is roughly equivalent to 100 plants/m2 and this more than halved wild radish growth and seed set. Wheat yield was completely unaffected by the presence of wild radish.

Crop competition is clearly an excellent way of suppressing wild radish, but unfortunately, it’s no more effective on resistant radish than it is on susceptible radish. 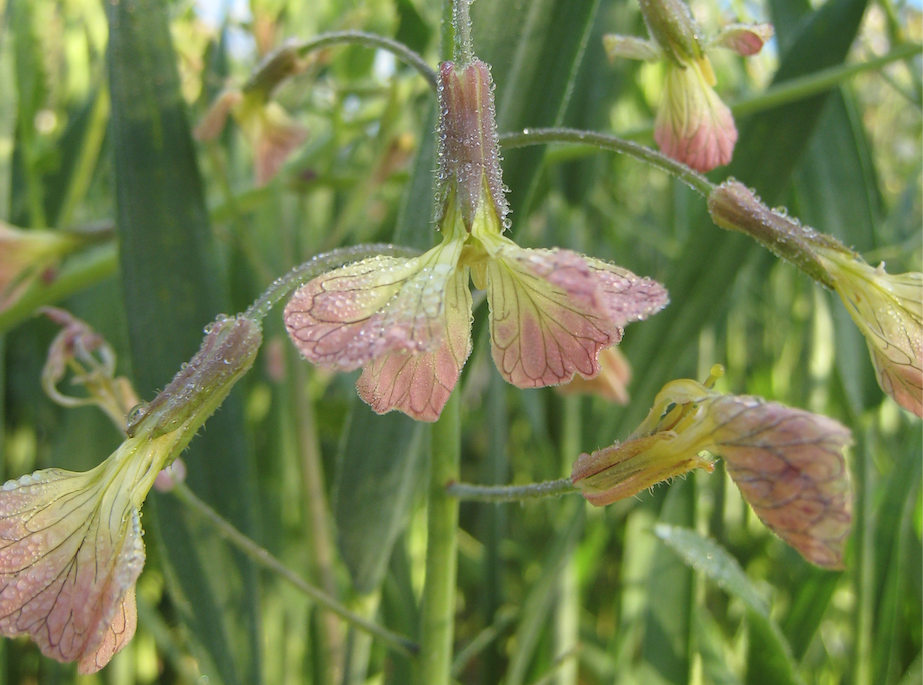 Danica Goggin knows more about 2,4-D resistance in wild radish (Raphanus raphinistrum) than just about anyone else on the planet. It’s minor fame, ☺️, but incredibly important research as this group of herbicides play a key role in global weed control.

The difference in growth between R & S radish

In this research, Danica measured every aspect of wild radish that you could think of and she did find some key differences between the susceptible (S) radish and the resistant radish (R).  She studied two S populations and 11 R populations. The R populations were all resistant to 2,4-D and the SU herbicide chlorsulfuron (Glean). There was also variable resistance to Dicamba, Imi (Intervix) and diflufenican (Brodal).

Imi (Intervix) resistant radish was shorter than Imi susceptible radish. It’s hard to tell if this was just a coincidence amongst these populations or if Imi resistance does affect height.

Naturally, you’d think that this R radish would exhibit less competition with wheat than the S radish, but alas, it didn’t.

Wild radish was grown either as a single plant in a pot on its own or in competition with five wheat plants in a single pot. It’s important to note that the pots were watered regularly and were well fertilised, so water and nutrients were not limiting. 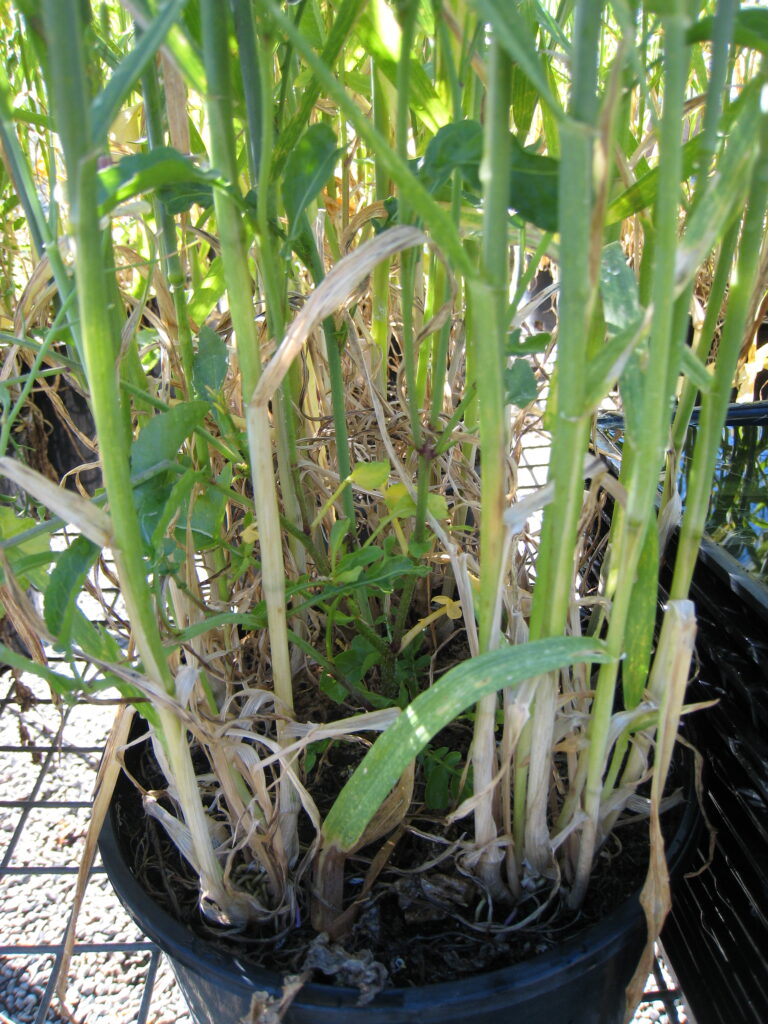 Crop competition is a good thing. It makes the radish grow taller, enabling a better result with harvest weed seed control, and competition from crop plants suppresses weed growth. This pot trial simulated 100 wheat plants/m2, which is at the low end of crop density in Australia. Other research has shown that increasing crop competition leads to even further suppression of weed growth.

A single wild radish plant, grown alone in a pot, yielded 4g of seed. When five wheat plants were added to the pot with wild radish, the wild radish seed yield was halved, but the presence of wild radish had no effect on wheat yield.

They grow them tough on Carnac Island

Check out the stem on this wild radish plant! AHRI researcher, Dr Mike Ashworth, along with former technician Rachel Asquith, braved the tiger snakes on Carnac Island just off Perth, Western Australia, to sample a susceptible population of wild radish. Turns out that while it is susceptible to all herbicides, it’s an absolute beast of a plant! 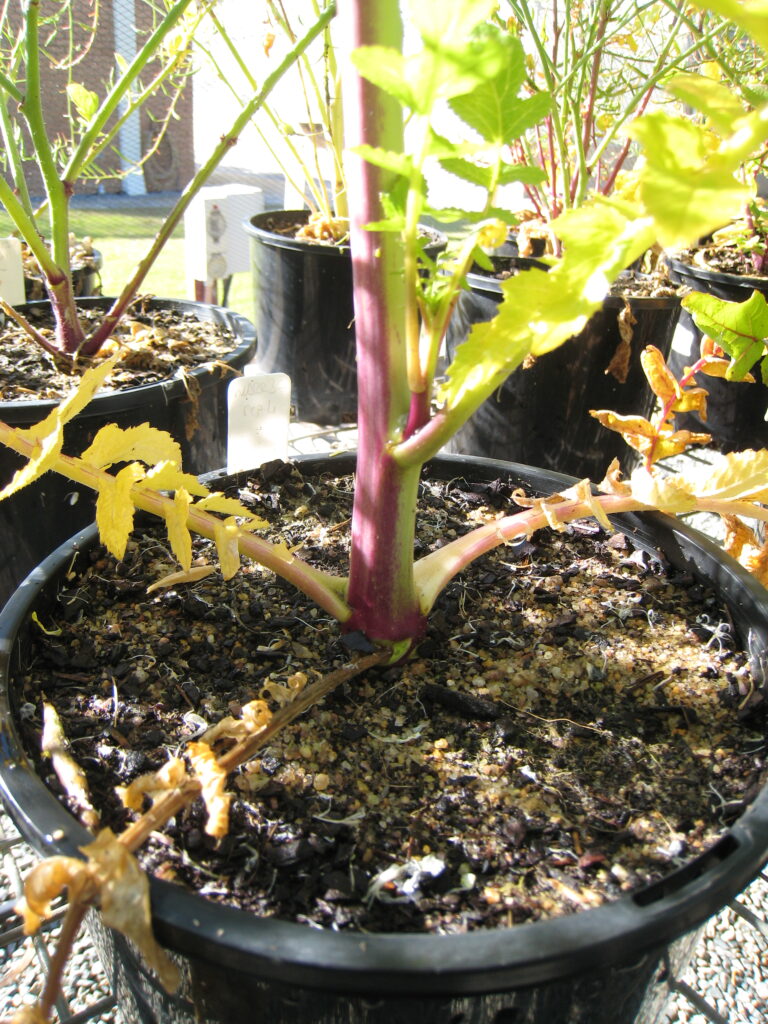 Wild radish with a GIANT stem!