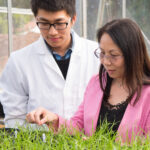 There’s a buzz around AHRI at the moment as former visiting PhD scholar Lang Pan and AHRI researcher Qin Yu and others have recently had a paper accepted into the prestigious PNAS journal of the USA. They have achieved this because:

A similar phenomenon has been observed by cancer researchers and doctors. When a patient with a cancer tumour is treated with chemotherapy, the drugs attack the cancer cells and the tumour reduces. All can look well for a while and then sometimes the tumour grows back. It turns out that some of the cancer cells have extra ABC transporters on the cell membrane that pump the cancer drugs out of the cells. These cells survive and the tumour grows back. Now we have a cancer tumour made up of cells with extra ABC transporters, rendering them resistant to a range of cancer drugs. As with resistant weeds, there can be other mechanisms at play that cause multi-drug resistance.

It’s exciting when high level scientists working in disparate fields have their research overlap, allowing them to learn from one other. 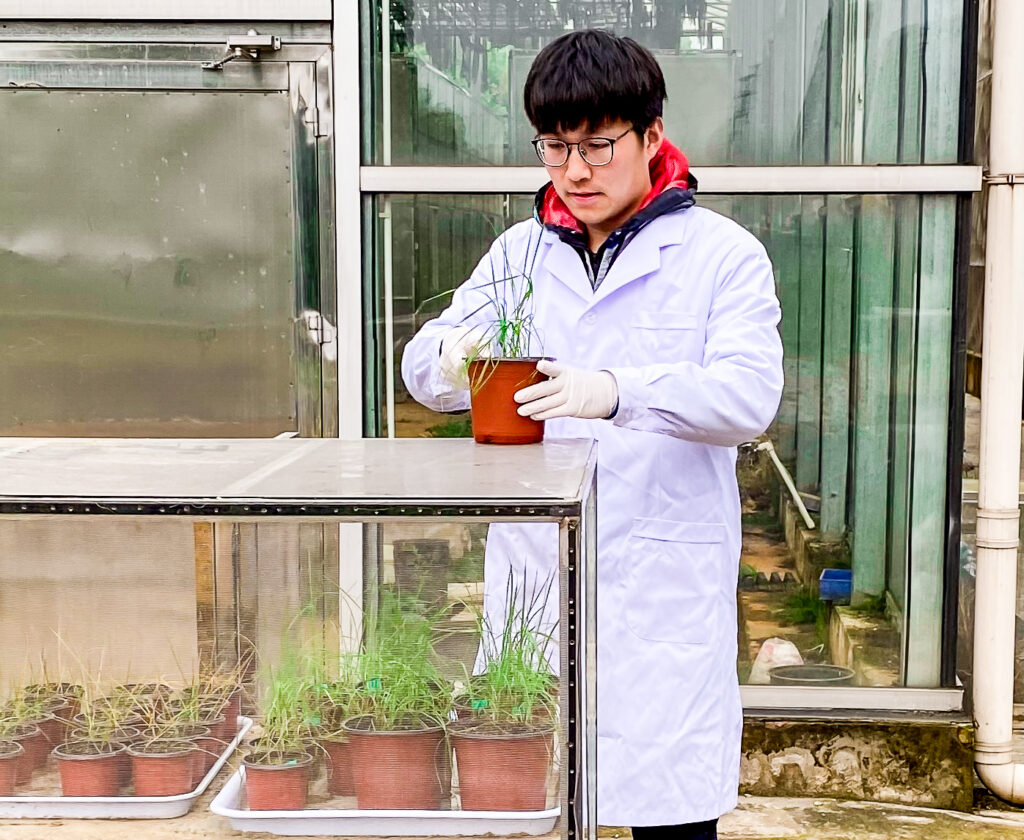 In 2019 we reported on a population of glyphosate resistant awnless barnyard grass (Echinochloa colona also known as jungle rice) that was discovered near Kununurra, Western Australia which was the world’s first example of metabolic glyphosate resistance.

This same population of barnyard grass is the subject of this research. 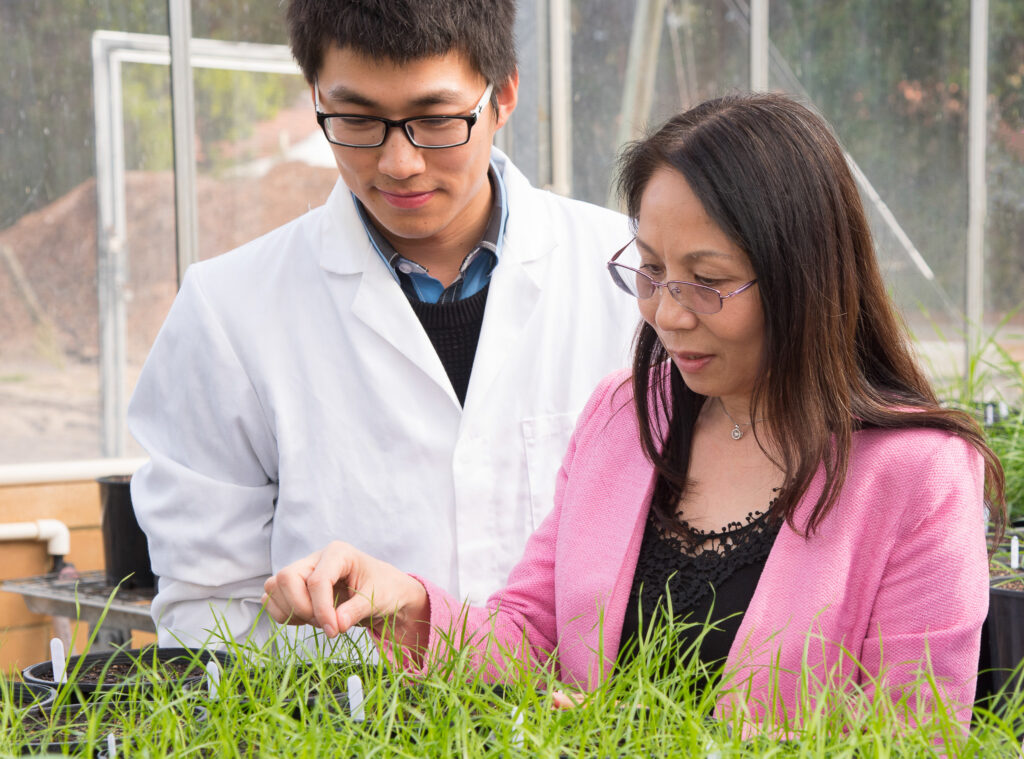 Dr Lang Pan when he was completing his research at AHRI in 2017 and Principal Research Fellow, Qin Yu.

The researchers then created transgenic rice that is identical to normal rice, apart from the over expression of these ABC genes. They then sprayed this rice with glyphosate and found that one of the ABC genes caused resistance. Specifically, it was the EcABCC8 transporter gene.

The diagram below shows the survival of this transgenic rice to glyphosate applied at 540 g ai/ha (on the right) compared to the control plants in the front row. 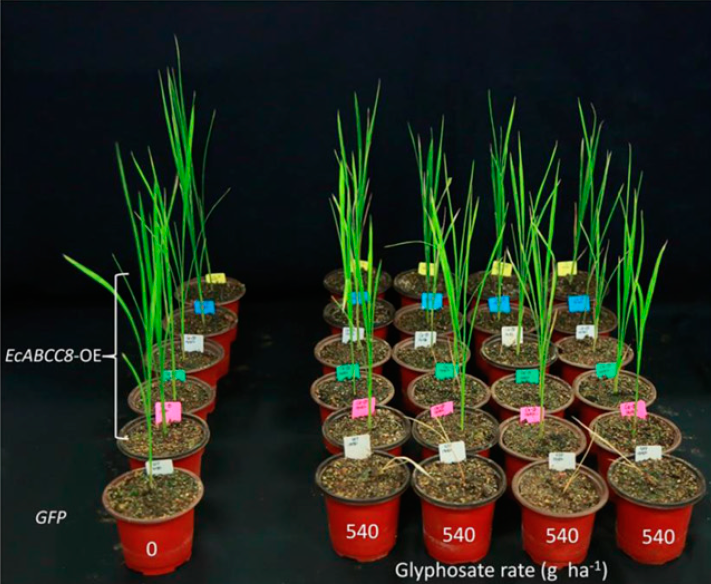 As well as rice, the researchers also created transgenic maize and soybean that was resistant to glyphosate through over expression of the EcABCC8 transporter gene.

In contrast to ABCC8 over-expression, the researchers then took the next step of using CRISPR/Cas9- mediated knockout to see if this enhances rice sensitivity to glyphosate. This is pretty tricky stuff. Essentially, the researchers used CRISPR technology to create a rice plant that has lower than normal ABCC8 transporters on the cell membrane and this increased the susceptibility to glyphosate. So, this technique further proves that ABCC8 is a player for glyphosate resistance.

What are ABC transporters? 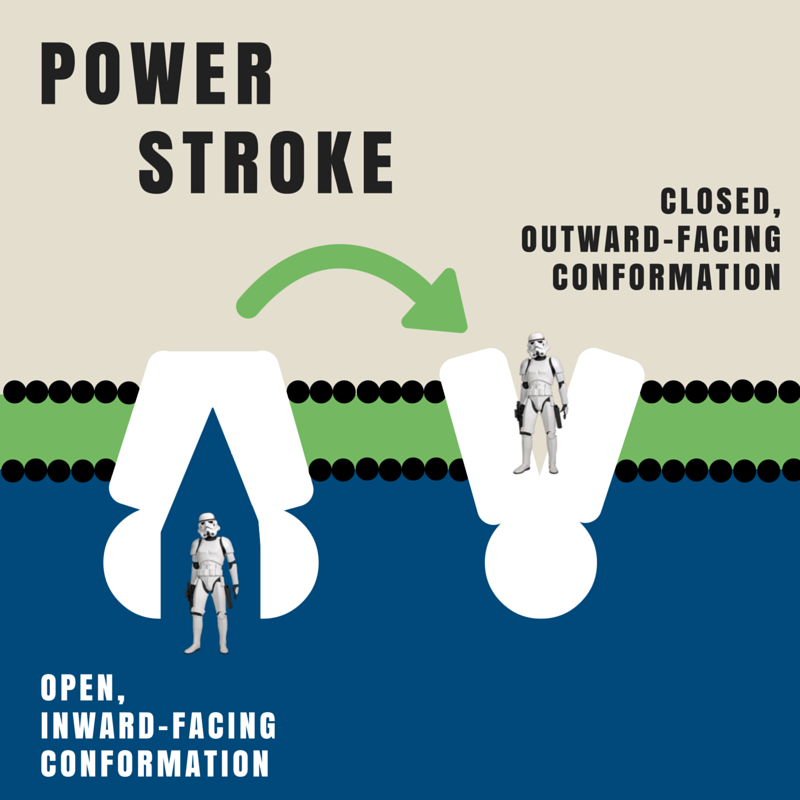 In reality, they look a little more like this.

Pumping glyphosate out of the cell

Glyphosate enters plant cells through diffusion and floats around in the cytoplasm. The cytoplasm is the ‘soup’ that all of the cell organelles are swimming around in. Glyphosate needs to get into the plastids to find its target enzyme, EPSPS. The pH of the cytoplasm is about 7 (neutral) and glyphosate gets trapped as it disassociates into anions so it is unable to simply diffuse out of the cell. This is why it takes active transport (e.g. from an ABCC transporter) to move it out of the cell.  The ABCC transporters sit on the cell membrane and push the glyphosate into the apoplast. The apoplast is the space between the cells that is commonly used to transport liquids and gases. By pushing the glyphosate molecules into the apoplast the concentration of glyphosate in the cytoplasm is reduced and the effectiveness of the herbicide is reduced. 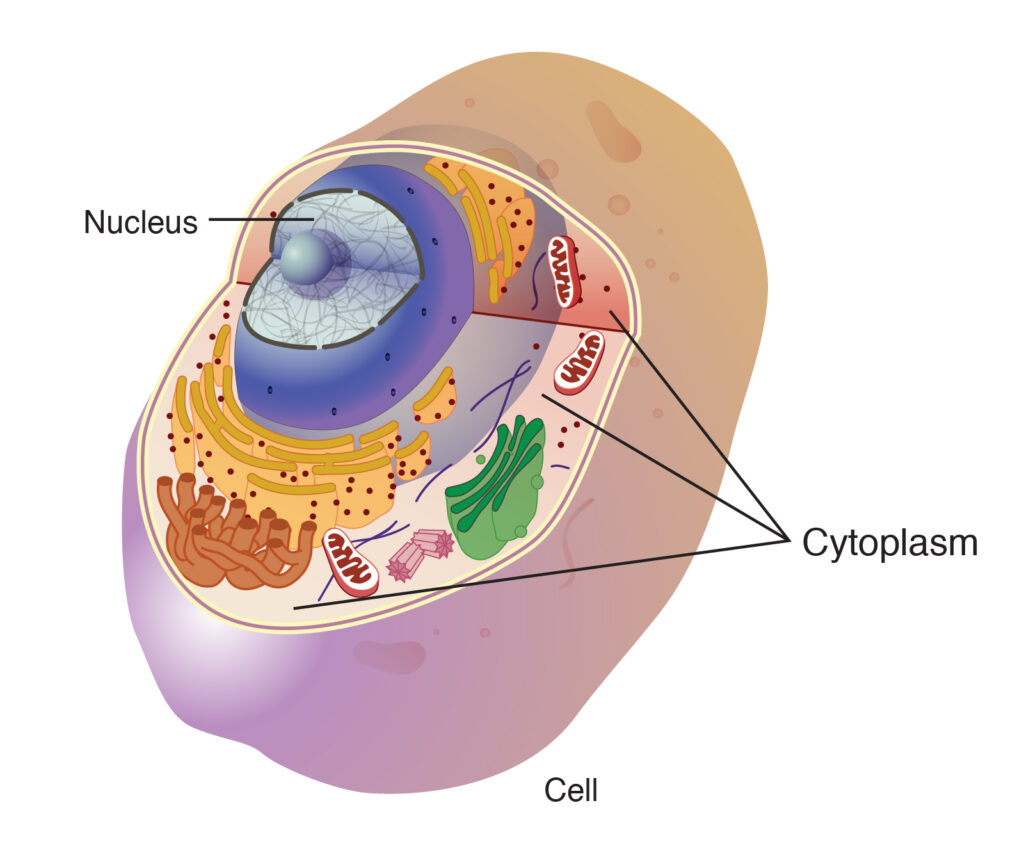 We are very excited to have this paper accepted into the prestigious journal PNAS (Proceedings of the National Academy of Science of the USA) and to discover that a resistance mechanism in weeds has similarities to that of multi-drug resistance in cancer treatment. This research was made possible by an agreement with the Chinese government to host Chinese students at AHRI and we celebrate the success of student Lang Pan and others in this great achievement.

You can read the paper An ABCC-type transporter endowing glyphosate resistance in plants here.

2,4-D synergises metribuzin
Don’t poke the bear with Dims and Dens in cereals