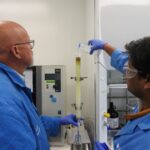 What can a rousing feminist anthem written by Annie Lennox and Dave Stewart, and performed by the Eurythmics and Aretha Franklin, possibly have to do with weed control?

In this AHRI insight, we are finding answers to questions like…

‘Can crops do more of the heavy lifting when it comes to weed control than modern farming methods have allowed them?’

‘Have we tried so hard to protect crops from weeds that we have forgotten that they have innate mechanisms to ‘stand on their own two feet’ and ‘do it for themselves’?’

A series of important studies into the practical implications of harnessing the crop’s ability to defend itself against weeds are starting to produce important results, leading to improvements in farming practice and the development of new cultivars.

The main project is led by Professor Leslie Weston at Charles Sturt University and Associate Professor Dr Chris Preston at The University of Adelaide, to investigate several aspects of crop competition. In this AHRI insight, we are going to delve into just one set of experiments within the broader project, that investigated the ‘impact of crop cultivar on in-crop and post-harvest weed suppression’. 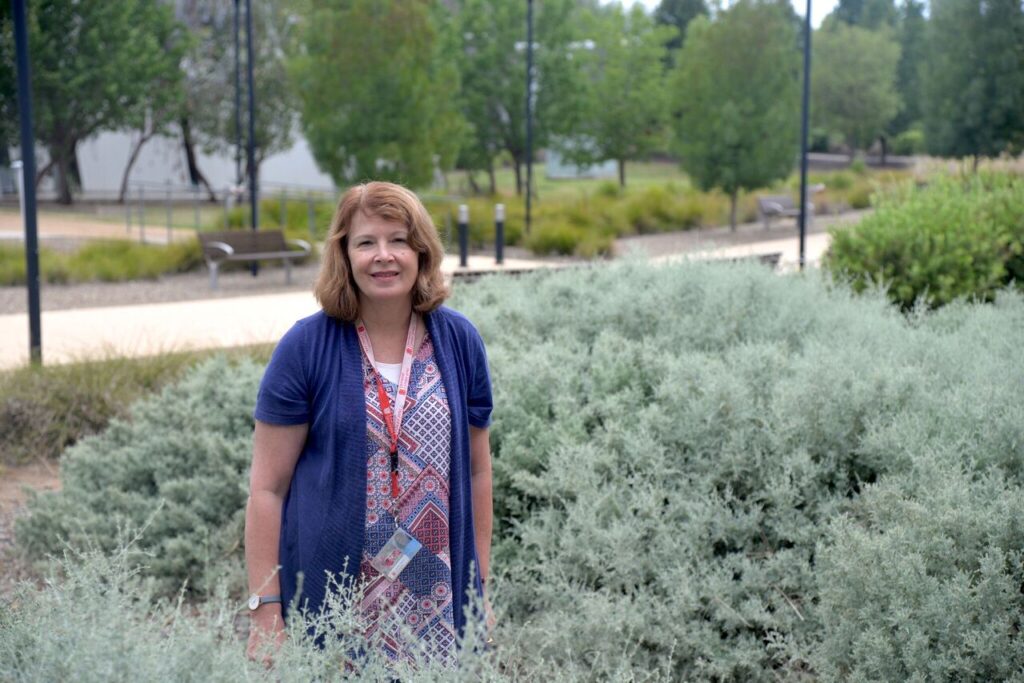 Building on important earlier work by Greg Rebetzke, Deirdre Lemerle and others, one experiment at Wagga Wagga studied the differences in the weed suppressive ability of two canola and eight cereal cultivars, both in-crop and post-harvest, over three seasons.

PhD candidate James Mwendwa conducted both these field trials and has teased apart the contribution of physical mechanisms such as plant architecture and stubble load, and chemical mechanisms such as the release of allelopathic substances into the rhizosphere and during the decay of crop residues after harvest. 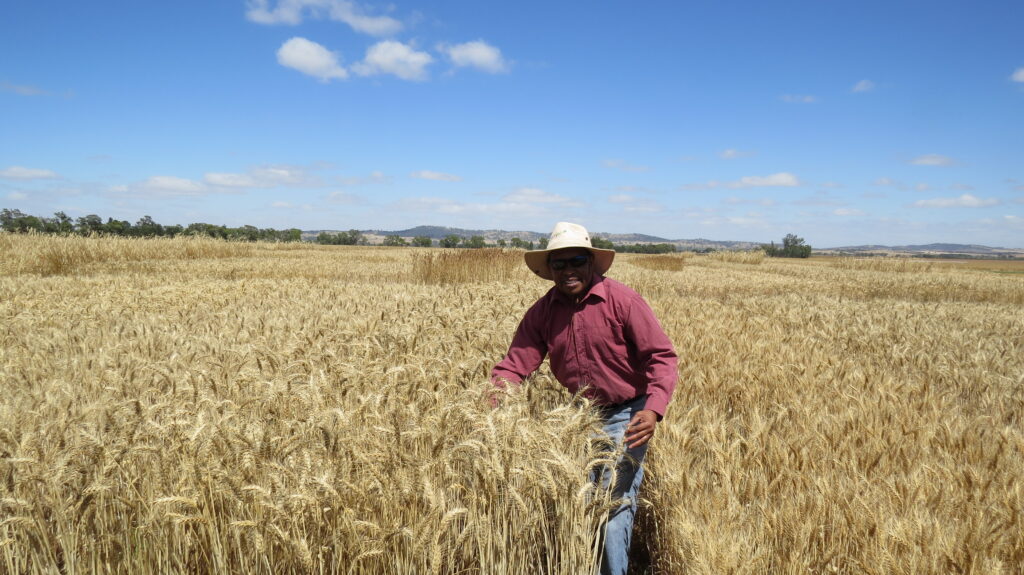 James Mwendwa in the field.

We know from many, many studies that crop plant architecture, leaf area, plant density, narrowing row spacing and even east-west sowing all contribute to the ability of a crop to shade the soil surface and minimise weed germination.

Early crop vigour is another key aspect to crop competitiveness with factors such as seed size and vigorous growth having a big impact on a crop’s competitive ability.

The third, and least well-understood aspect to a crop’s interaction with weeds is the plant’s production of herbicidal substances that inhibit weed seed germination.

Stacking these different aspects of crop competition together gives the crop a clear advantage over weeds – and reduces the reliance on in-crop and even fallow chemical weed control.

This all points towards great opportunities for screening for these competitive traits during the plant breeding process. This has already led to the wheat pre-breeding team delivering new weed suppressive wheat lines that have about double the seedling leaf area, compared to current commercial wheat varieties, to commercial plant breeding companies in Australia. Likewise, other research has demonstrated the value of grading canola seed to select the very largest seeds for planting to ensure maximum early vigour to suppress weed germination and growth.

Measuring the power of allelopathy

But it is the unseen power of allelopathy – the crop plant’s ability to produce herbicidal substances and exude them into the rhizosphere that is the real highlight of James’ research work and continuing studies by the Weston-led research group. These allelochemicals produced in-crop add to the suppressive effect of overall crop biomass and shading. When the residues decompose after harvest these allelochemicals are also released into the soil where they can have a similar effect to pre-emergent herbicides, over and above the physical effect of stubble load shading the soil surface. 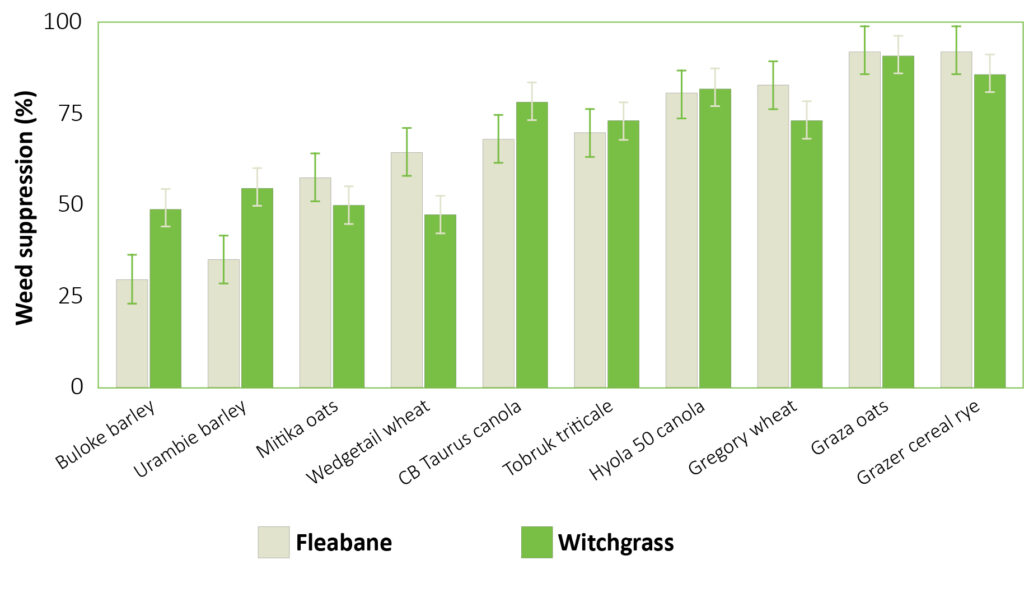 Some crops, including rye, grazing and cereal barley, grazing and cereal wheat and grazing and grain canola, were clearly more suppressive of in-crop weeds, likely due to a more competitive canopy architecture, but this weed-suppression did not always transfer to suppression of weeds post-harvest. This points to some cultivars possessing greater allelopathic traits that remain active after harvest. Cereal rye stands out in the field because it has both a competitive plant structure and produces allelochemicals both in the growing season and in decaying residue.

Beating weeds without the support of in-crop herbicides

In the experiments comparing in-crop weed suppression across two years and two environments, a few wheat cultivars stood out in their ability to suppress weeds, even 60 to 120 days after planting, without the support of pre-emergent or in-crop herbicides. These were the old heritage variety Federation, and two newer varieties, Janz and Condo.

While Federation exhibited strong early vigour, Janz and Condo were less vigorous early in the season but, like Federation, were still having a suppressive effect on fleabane and witchgrass later in the season.

To find out why, James sampled the rhizosphere and detected the known allelochemicals, benzoxazinoids (BXs), in sufficient quantities to explain the lack of weed germination in all three cultivars. All three cultivars were shown to produce higher quantities of BXs early in the growing season than other cultivars in the experiment, and BX production slowed after flowering.

The effect of the BXs was more evident in the drier year, suggesting that leaching or decomposition could affect persistence under moist conditions.

Graph 2: The relationship between mean wheat variety early biomass and weed biomass at crop maturity before flowering at Wagga Wagga, NSW, in 2015 and 2016. Note: Each data point represents the average of the two-year mean of six replicates for each year. Source: James Mwendwa, Charles Sturt University, 2019.

A future that includes cultivars that produce their own herbicides

When the right soil microbes are present, they can transform BXs to produce phenoxazinones, which have 1000x more herbicidal potency than BXs. Three of the four known phenoxazinones were present at both sites, in both years. Plant-derived BXs and microbial-derived phenoxazinones are effective bio-herbicides against small-seeded grass and broadleaf weeds.

James’ work to detect these chemicals in the roots, rhizoplane and rhizosphere of wheat plants is the first demonstration that sufficient phenoxazinone production occurs in Australian soils to impact weed suppression under field conditions for certain wheat cultivars.

With the right cultivar and the best agronomy, cereals can potentially continue to ‘do it for themselves’!

No knockdown, no worries, if…
Is there an invisible gorilla in your paddock?