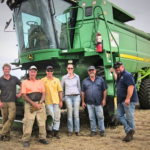 On November 5th, 2010, a truck arrived at Yuna at the northern tip of the Western Australian wheatbelt. Its cargo was a John Deere 9650 harvester with a tow-behind Harrington Seed Destructor attached. Twenty local farmers had arrived to see the new machine that they’d heard about for so long. The machine was the brainchild of farmer and inventor, Ray Harrington, and it can destroy weed seeds that exit the rear of the harvester. This was the first day of Michael Walsh’s two-year field research program to evaluate the effectiveness of harvest weed seed control at 24 sites across the entire Australian wheat belt. There was excitement in the air and the anticipation was immense. Farmer comments were along the lines of ‘don’t bother trialling the thing, I want one now’, and ‘when can I get one?’ The harvester started, the HSD fired up like a jet engine, then just 20m into the first plot it stopped. And there it stood for three days while the faulty centrifugal clutch was repaired. The farmer enthusiasm waned, and Michael Walsh sighed as he thought of the enormous task ahead!

Strangely enough, Michael will tell you that he loved the whole experience of completing this research, despite the many challenges along the way. And what did he find from two years of this GRDC funded, AHRI supported research? One, solitary number: 60%. That’s it. OK, he did find out a bit more than that, including how frustrating it is to work with agricultural machinery, but that number is the main result. Harvest weed seed control in wheat crops in Australia will reduce the annual ryegrass germination in the following autumn by 60%, and the HSD, chaff cart and narrow windrow burn techniques are all equally as effective as one another.

So what else did we learn from this research? Read on for the answers… In this research, Michael Walsh, now with Sydney University, was helped by a team of dedicated assistants, including Charlotte (Charlie) Aves who not only helped develop many of the sites, she counted ryegrass at most of the sites as well. To undertake this research, it involved towing the John Deere harvester with HSD attached on a low loader from site to site. The John Deere was used for the Control, HSD and narrow windrow burn treatments, and in most cases was compared to a harvester towing a chaff cart that was owned by the host farmer. Plots of 50m x 11m were established, ryegrass density and seed set assessed, and the harvesters then did their thing. At the opening rains in the following autumn, ryegrass density was counted before any herbicides were applied. Rainfall timing and the amount was variable from site to site, resulting in some sites experiencing a large flush of weeds where other sites had lower numbers.

Q. Annual ryegrass – how many seeds per plant

This is a bit of a ‘how long is a piece of string’ type question. However, this research gave us a fairly definitive answer. On average across 24 sites, annual ryegrass in Australia set 209 seeds per plant in wheat crops. The range was from as low as 28 seeds/plant to as high as 425 seeds/plant depending on rainfall, ryegrass density, and crop competition. 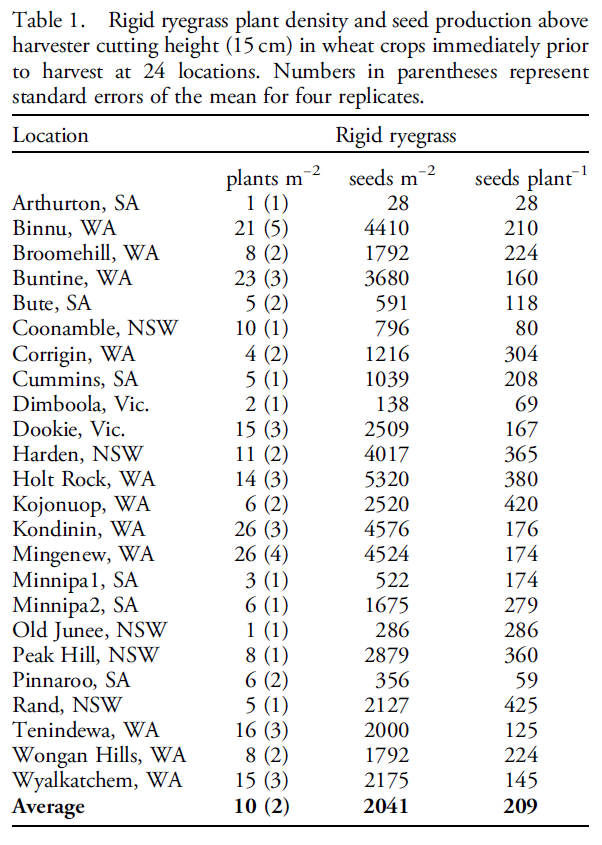 This research aimed to target low to medium ryegrass densities in the crop. The average was 10 ryegrass plants/m2, hardly a ‘blowout’ in anyone’s language. Despite this, ryegrass set, on average, 2041 seeds/m2. This is the whole point of this research. That’s a lot of ryegrass to target with herbicides alone. 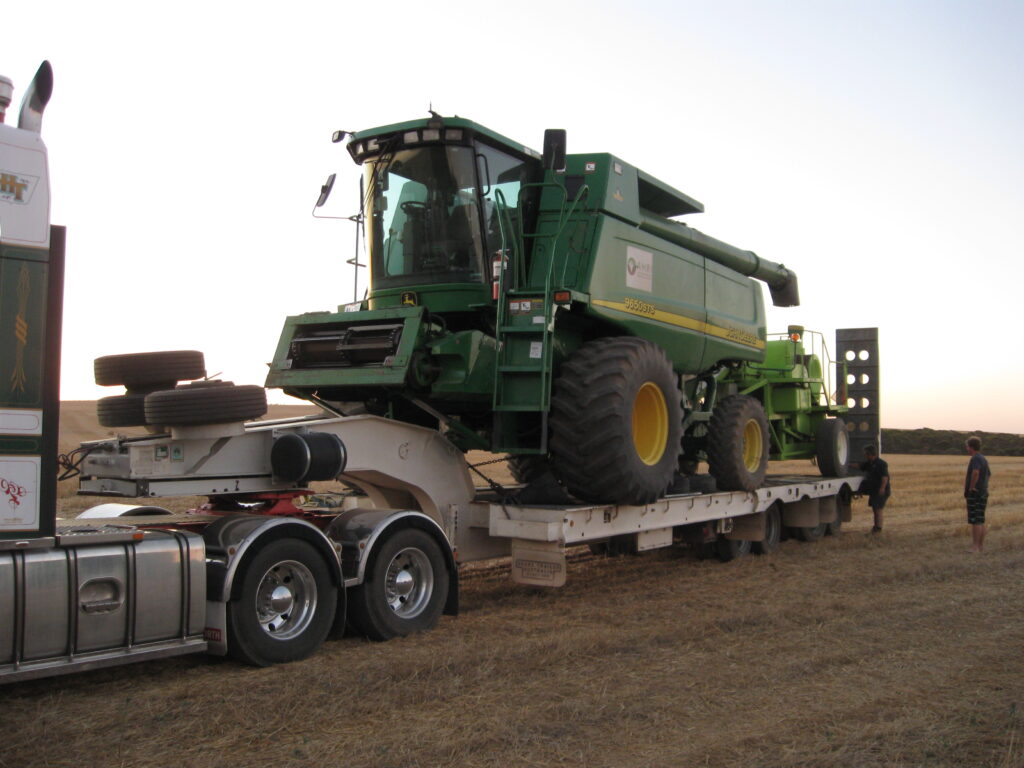 Transporting the machinery was a massive effort to conduct this research

All of that effort, thousands of miles of travel, 24 sites, more than 50 Steak Dianne and Chips meals (or Chicken Parmi), only to find that all of the harvest weed seed control tools performed equally. They each reduced the subsequent ryegrass germination by 60%. 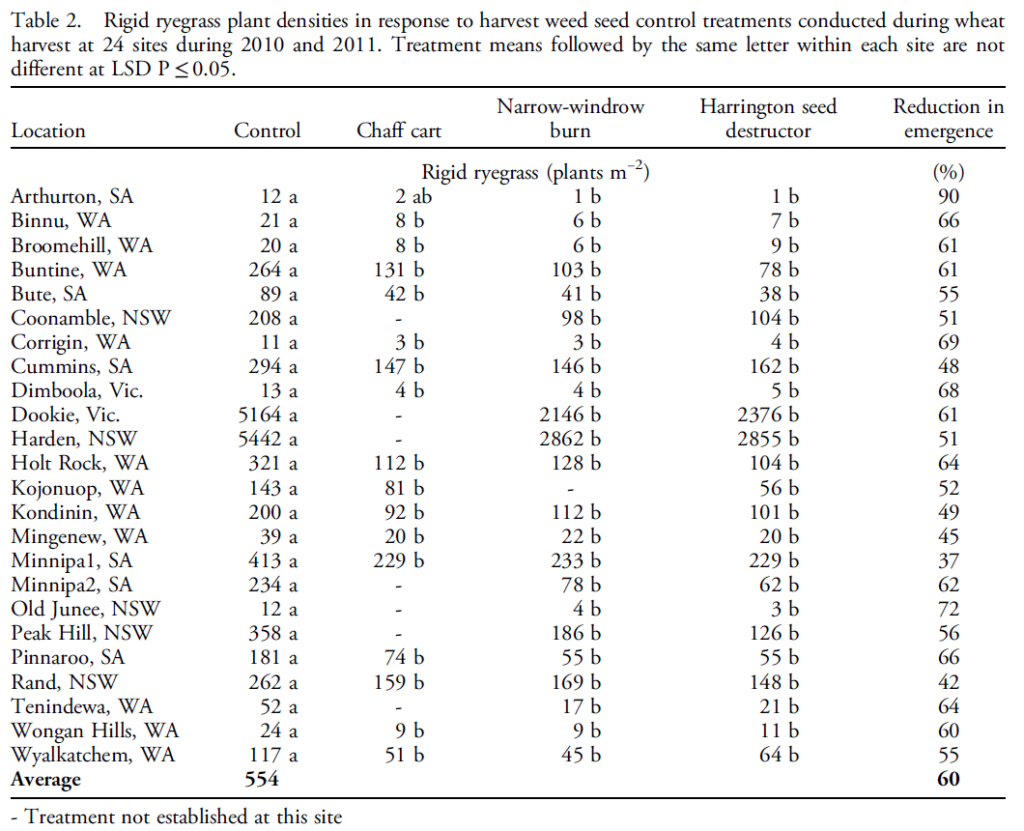 This is actually great news and it’s what we expected would happen. Harvest weed seed control is mostly affected by the seed retention of the weed species, how many of the weed seeds enter the front of the harvester, and what proportion of those weed seeds end up in the HWSC tool of choice.

To achieve 60% reduction in ryegrass germination in the year following the HWSC treatments means that it is likely that 70-80% of the ryegrass seed was removed at harvest. Why? We must remember that there’s an old seedbank of ryegrass in the soil, some of which germinates. To achieve a 60% reduction in germination we need to achieve greater than 60% removal of weed seeds at harvest. Previous research by Michael Walsh has confirmed that 70-80% ryegrass seed removal at harvest is typical.

Many growers have concerns about HWSC tools that focus only on the chaff, e.g. HSD and the chaff cart. Their concern is that weed seeds may exit the harvester with the straw (through the rotor) and not end up in chaff fraction. Research has shown that where a harvester is not set up right to capture weed seeds in the chaff that as much as 50% of the weed seeds can exit with the straw (see link here). If that was the case in this research, the narrow windrow burning option would have won the race as this tool destroys the weeds in the chaff and the straw. Fortunately, that was not the case and this is compelling evidence that it is possible to set up a harvester correctly to divert the vast majority of weed seeds into the chaff fraction (see link here).

Sure, 100% weed seed control at harvest would be amazing, but this isn’t achievable with Australian weeds. We have modelled what happens to profit and the ryegrass seedbank using the RIM model many times and in just about every case 60% weed seed removal is enough when used in combination with herbicides and a range of other weed control tools. You can see this in our RIM models here and here.

Generally speaking, however, many grain growers find they can maintain the ryegrass seedbank at a moderate level under continuous crop with intensive use of modern herbicides. If growers can hold the seedbank level without HWSC, then if we add HWSC at 60% efficacy we find that it puts the seedbank into gradual decline, and this, in essence, is what weed management is all about. This can take a few years of persistence for farmers to observe in the field without extensive measurement. As they say in the classics, ‘it won’t happen overnight, but it will happen!’

Hats off to Michael, Charlie and the rest of the team for a massive research effort that proves beyond all reasonable doubt, that harvest weed seed control works, and all HWSC tools are equal if they are set up right. It was a lot of effort for one solitary number, 60%, but it was worth it!

If you’d like to hear from Stephen Powles talking about this research, you can listen to the podcast here.

Learn more about Harvest Weed Seed Control in the new Diversity Era course HWSC 101, run through WeedSmart. Click below to find out more and do the course: