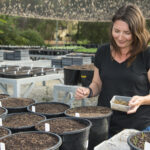 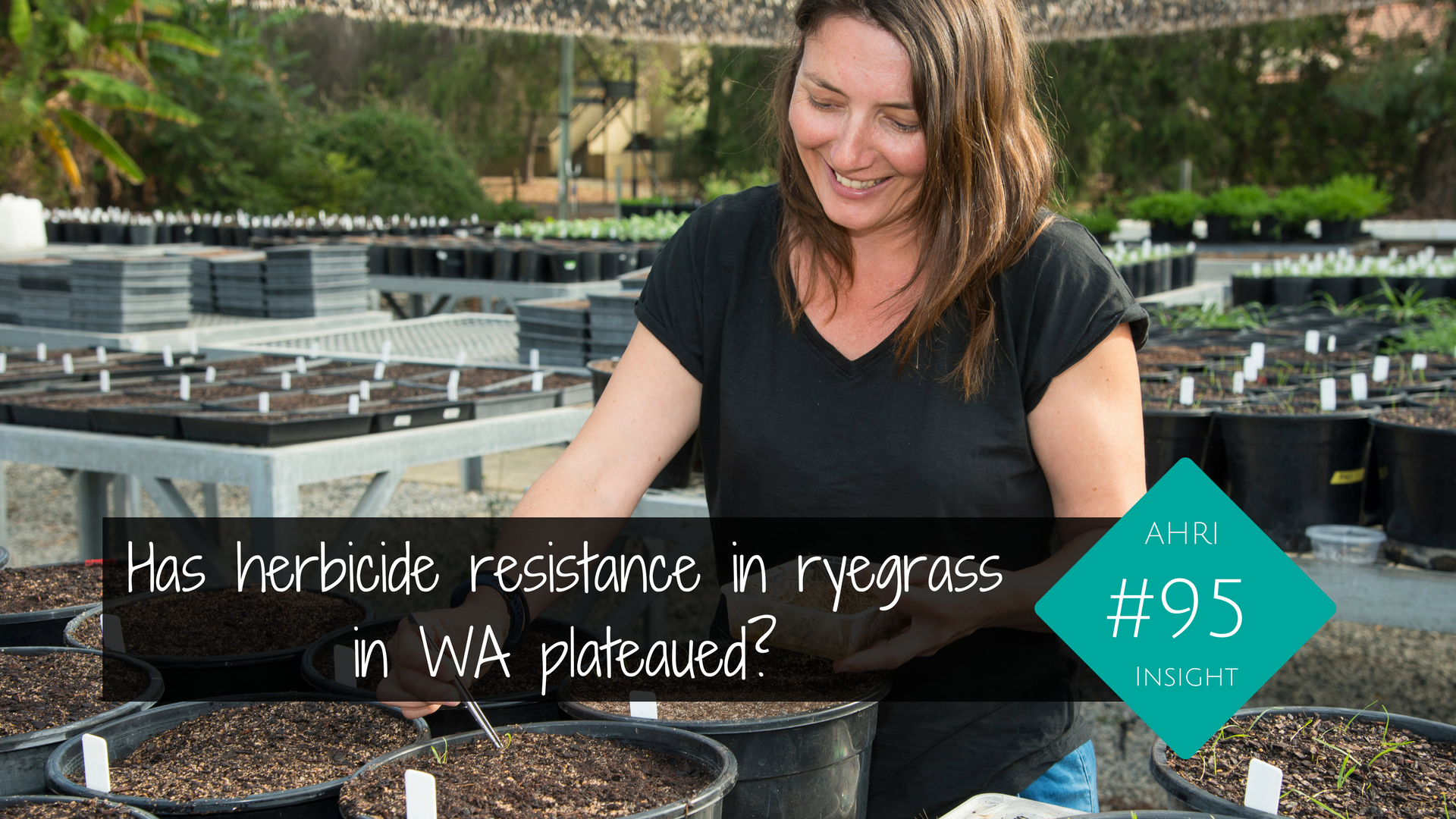 “The nice part about being a pessimist is that you are constantly being either proven right or pleasantly surprised.” George Will, American journalist, author and Pulitzer Prize-winner.

We are not pessimists at AHRI, but let’s face it, we rarely have good news when it comes to reporting on the level of resistance progression on Australian farms.  We are normally proven right that herbicide resistance levels are continually increasing.

The latest results from the AHRI random ryegrass resistance survey of WA led by Mechelle Owen isn’t necessarily good news, but it’s about as good as we could have hoped.  We know that herbicide resistance levels almost never decrease through time, so the very best that we can hope for is that resistance levels plateau, which is what Mechelle found for a number of herbicides.

Every five years, Mechelle, one of our dedicated AHRI researchers, undertakes the massive task of visiting 500 fields in Western Australia just before harvest to sample seeds of surviving weeds for resistance testing with GRDC support.

The graph below shows that the percentage of paddocks with resistant ryegrass has only risen slightly since the last survey in 2010. The graph is reporting on all levels of resistance, with more than 1% survival to a herbicide. It’s no surprise that resistance to the sulfonylurea (SU), and Fop (Diclofop) herbicides didn’t worsen from 2010 to 2015, as these herbicides were already totally shot. What was surprising, was that resistance to clethodim (Dim) and trifluralin and glyphosate was roughly the same in 2015 as it was in 2010. This was a very pleasant surprise. 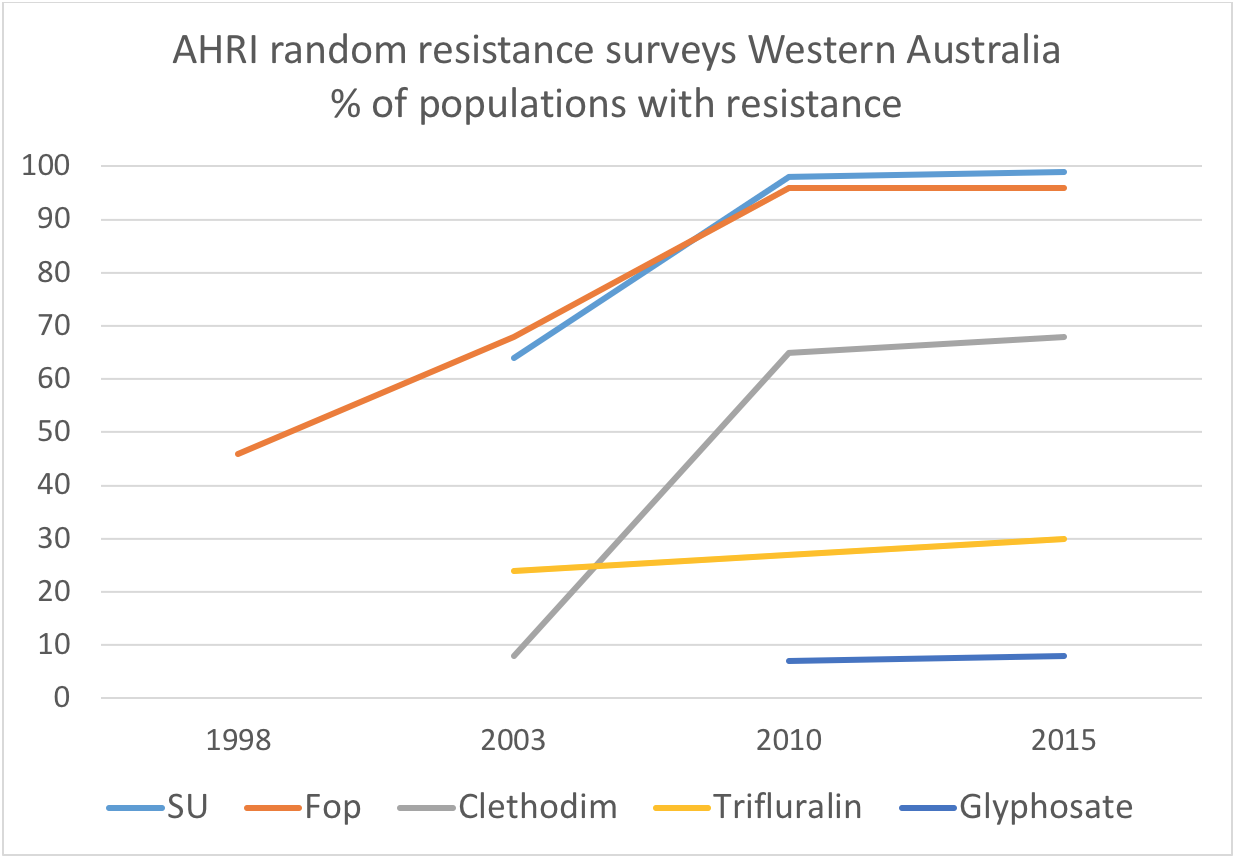 Perhaps it’s simply that resistance evolves slower to these herbicides than herbicides such as Fops and SU’s. Or, could it be that we’re on the right track with managing resistant weeds in Western Australia using a diverse range of tools to delay resistance evolution?

It’s likely to be a bit of both. For some commentary on what we are seeing with some of our key herbicides, continue reading.

Mechelle has tested a number of weed species in this survey.  We’ll focus on ryegrass for now and report on the other species in future editions of AHRI insight.

Table 1: Herbicides and rates used for resistance testing of the 2015 random survey.

Table 2: Percent of fields in Western Australia with herbicide-resistant ryegrass from random surveys collected between 1998 and 2015 for a range of herbicides.

Of the 500 fields visited in 2015, four of these fields contained ryegrass that was susceptible to SU herbicides. There were high levels of resistance to this herbicide in 2010 and that’s still the case.  This may seem obvious, but it does confirm what we have always said, that resistance is permanent.  In the absence of a fitness penalty, once a population of weeds becomes resistant, it stays that way. 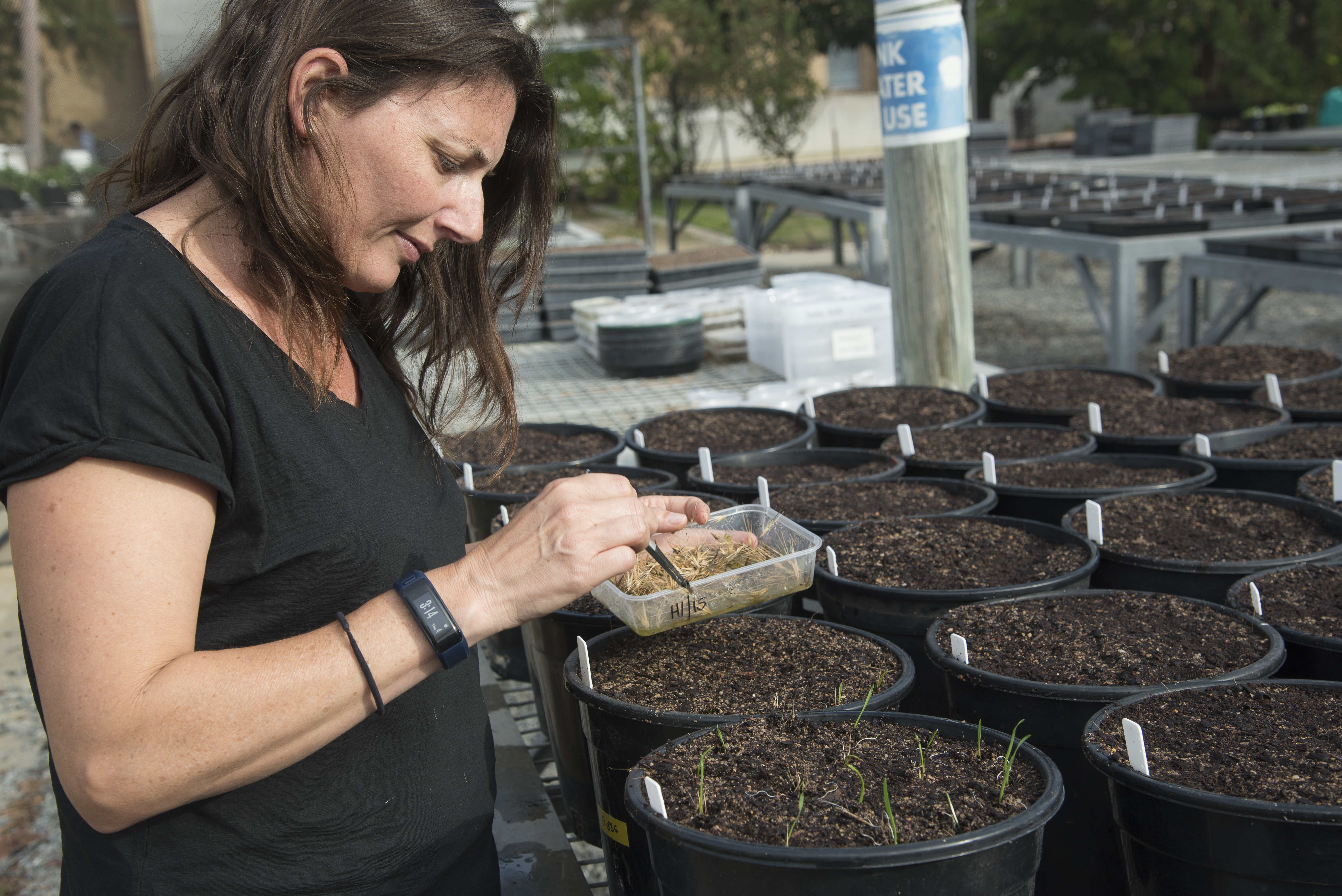 As for SU herbicides, there were very high levels of resistance in 2010 and this is still the case.

This was the big surprise package in the 2015 survey. We saw a large shift in resistance from 2003 survey to the 2010 survey, and naturally we expected to see a large increase in 2015, however, resistance levels in 2015 were similar to 2010. Having said that, we now have 44% of paddocks in a random survey with resistance to a high rate of clethodim, which is of great concern. Keep in mind that the tested plants in this survey were grown outside in winter conditions in 2016, so the concerns of getting better than expected results with clethodim when plants are tested in warm, summer conditions are not relevant here.

Glyphosate resistance has remained about the same from 2010 to 2015. We must be cautious with this result as we know that when resistance to a herbicide is relatively rare it can be hard to pick up with a random survey. Other more targeted surveys have found much higher levels of glyphosate resistance. It’s encouraging nonetheless. 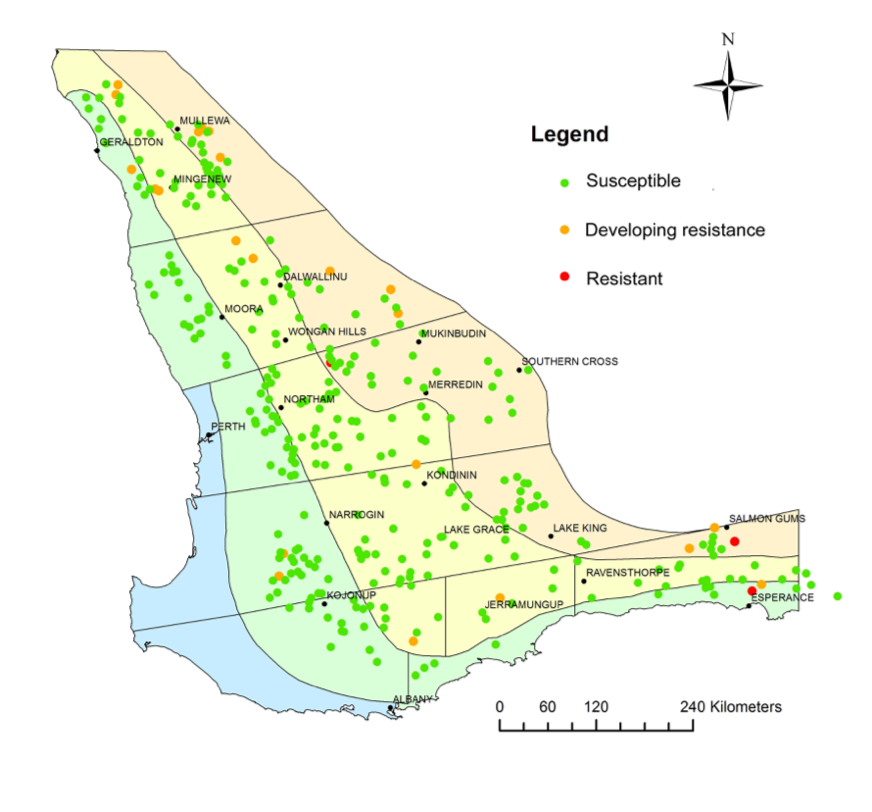 This survey found no populations with any resistance to paraquat. It’s hard to find very rare resistance genes with a random survey but it’s a good result nonetheless.

No resistance to Sakura (pyroxasulfone) was found in this survey.

Perhaps one of the surprises of this survey was that 11% of the populations were found to be developing resistance (1-19% survival) to Boxer Gold (prosulfocarb + s-metolachlor). It’s possible that this cross-resistance is due to P450 enzymes that have built up during years of selection with other herbicides resulting in low-level resistance to Boxer Gold. Mechelle tested many of these populations three times to confirm this result.

It’s encouraging to see that ryegrass resistance hasn’t moved as far as we may have expected in the past five years. Perhaps the diverse weed management practices that are being used by WA growers are paying off. This result should encourage us to try and keep these levels this way when the next survey comes around in 2020. Resistance may not regress, but holding it level is the next best thing.