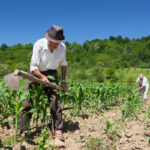 How many hours did you spend out in the paddock with a chipping hoe when you were a kid? Do you still carry one in every ute? Chances are you know how effective they are; but wouldn’t mind if you never had to use one again!

Australia has an unfortunate habit of claiming world-firsts in new species for the herbicide resistance lists. Fortunately, we have also been leaders in the development of new tools to help combat the problem.

The latest of these developments is the world’s first site-specific mechanical weeder for large-scale grain production systems. This new tool couples the age-old chipping hoe approach with modern optical weed detection technology and mechanisation to create a non-herbicide tactic to tackle herbicide resistant weeds of any size.

Researchers have put the machine through its paces and proven that it can effectively control weeds in fallow situations. 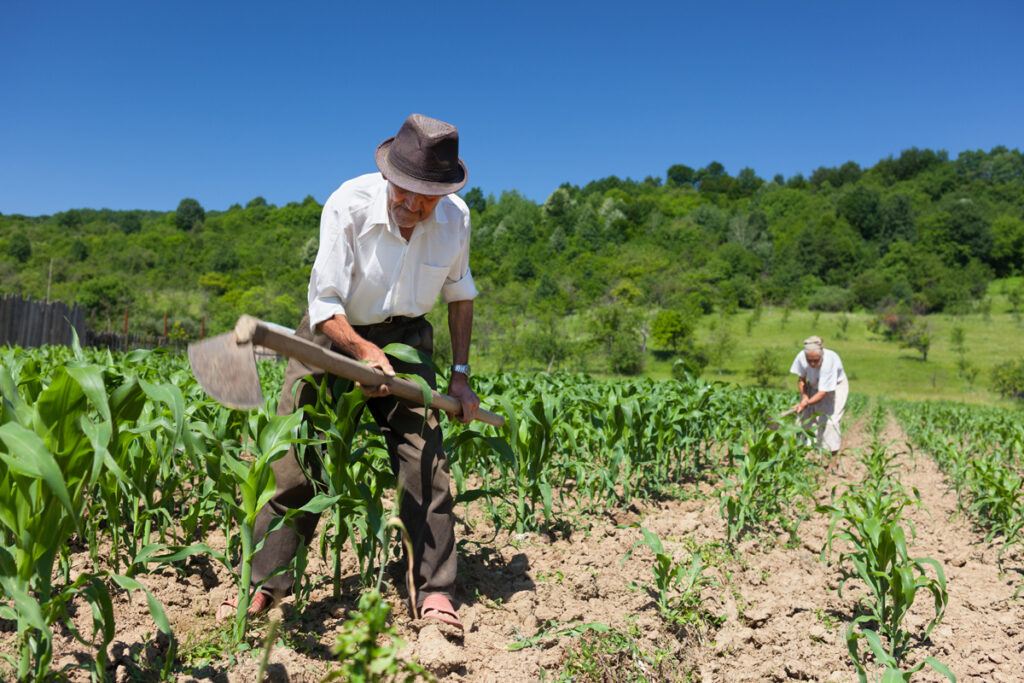 Quite likely the oldest, and some would say most effective, weed control tactic.

Like the optical sprayers that have vastly reduced chemical usage over the last 20 years, the Weed Chipper is fitted with sensors that detect weeds and trigger individual tynes (instead of spray nozzles) to rapidly chip out the weeds.

The concept of the Weed Chipper arose through a group of growers discussing weed control in a fallow field in southern Queensland when the idea of a rapid response tyne to chip out weeds was conceived.

With investment from GRDC, a group of agricultural engineers and weeds researchers* led by Dr Michael Walsh, Associate Professor and Director of Weed Research with the University of Sydney, along with grower and industry advisors, built and tested prototypes of the Weed Chipper, and paved the way to its commercialisation.

Agricultural engineer and senior lecturer at the School of Engineering at The University of Western Australia, Dr Andrew Guzzomi led the engineering development of the rapid response tyne, which was based on the Shearer Trashworker hydraulic breakout system. 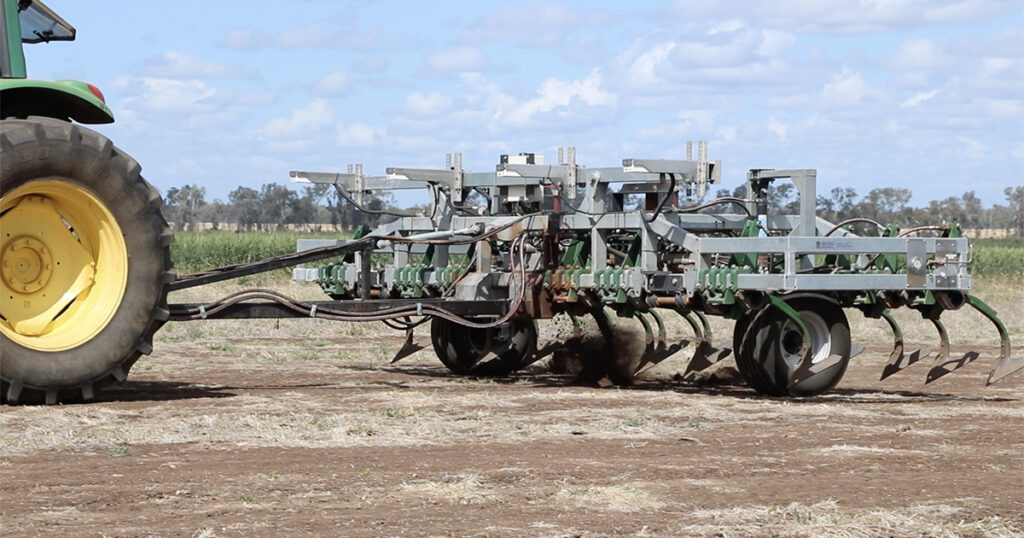 Situations where the Weed Chipper is a perfect fit:

✅ As a double knock partner to a herbicide application, particularly if the second spray can’t be applied within the ideal timing window.

✅ To replace a pre-seeding knockdown with a non-herbicide tool to enable early sowing and provide weed-free conditions to boost crop establishment and competition.

✅ Efficient patch management tool to nip herbicide resistance in the bud without compromising moisture and stubble conservation in the fallow.

✅ Treat large and or stressed weeds to prevent seed set and drive down the weed seed bank.

Extensive field trials were conducted to test the efficacy of the Weed Chipper on a range of winter and summer weeds at varying growth stages and plant sizes.

In all the field trials the weeds were planted as 2-leaf seedlings on eight different occasions so that on the day of treatment the weeds, ranging from 2-leaf seedlings to fully mature, flowering plants, were pitted against the Weed Chipper under the same conditions.

The result was essentially 100 per cent control of all species, at all growth stages, at all three locations.

This difference in efficacy between the plot and commercial-scale trials is likely due to the small-scale trials being conducted on weeds planted in straight lines where once detected, they were subject to the full impact of the centre portion of the sweep. In the commercial paddocks, the weed location was obviously random and some weeds survived if they were only impacted by the outer wing of the triggered sweep.

Across the 8ha trial area, the tynes were triggered 5055 times, equivalent to a weed density of 0.6 plants per 10 m2. Like the optical sprayers, targeted tillage is suitable for use at low weed densities, i.e. 1 plant per 10 m2 or less.

The Weed Chipper disturbed only 1.8% (642 m2) of the paddock’s surface area during weed control. The divot created each time a weed was detected was 0.3 m2 and the displaced soil was spread over an area of 2.2 m2 in the direction of travel.

The response tyne is designed so that the amount of soil disturbance can be altered as required to control the target weeds. The cultivation depth and duration can be increased to target large tap-rooted and fibrous weed species, or reduced for smaller, shallow-rooted species.

With such low-level disturbance, the Weed Chipper is a practical option for no-till farmers wanting to reduce their reliance on herbicides, particularly glyphosate, in the fallow. 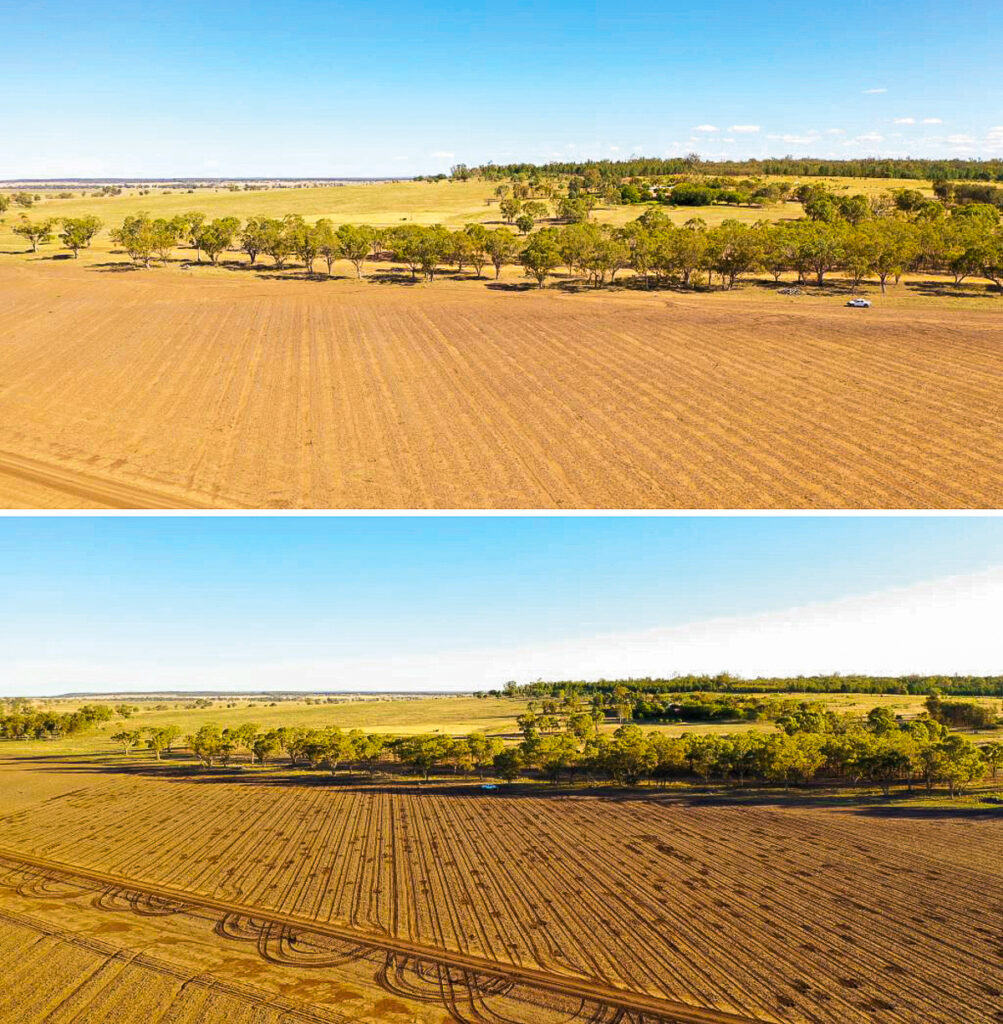 Drone shots showing a commercial paddock prior to treatment with the Weed Chipper (top) and the soil divots after weed control treatment (lower).

The Weed Chipper has been developed to operate at a ground speed of around 10km/h. Although higher operational speeds are possible, this would increase system loads and the potential for misses of target weeds. Compared to herbicide applications, there are less environmental limitations impacting on the safe operation of the Weed Chipper, which can be operated 24/7 if necessary, and there is potential for it to be mounted on a robotic platform if available.

The Weed Chipper concept has been proven to be an effective non-herbicide weed control tool and WA based company Precision Agronomics Australia (PAA) has partnered with The University of Western Australia (UWA) to commercialise the novel technology.

The downside of the v-shaped sweeps used in the development phase is that weeds often survived if they were impacted by the outer wings of the sweep rather than the centre third (where weed control was 100% effective). The research team has registered designs for new hoe-shaped sweeps that minimise the chance of weeds glancing off the sides.

Commercialisation will likely see the release of a 12m version of the Weed Chipper. 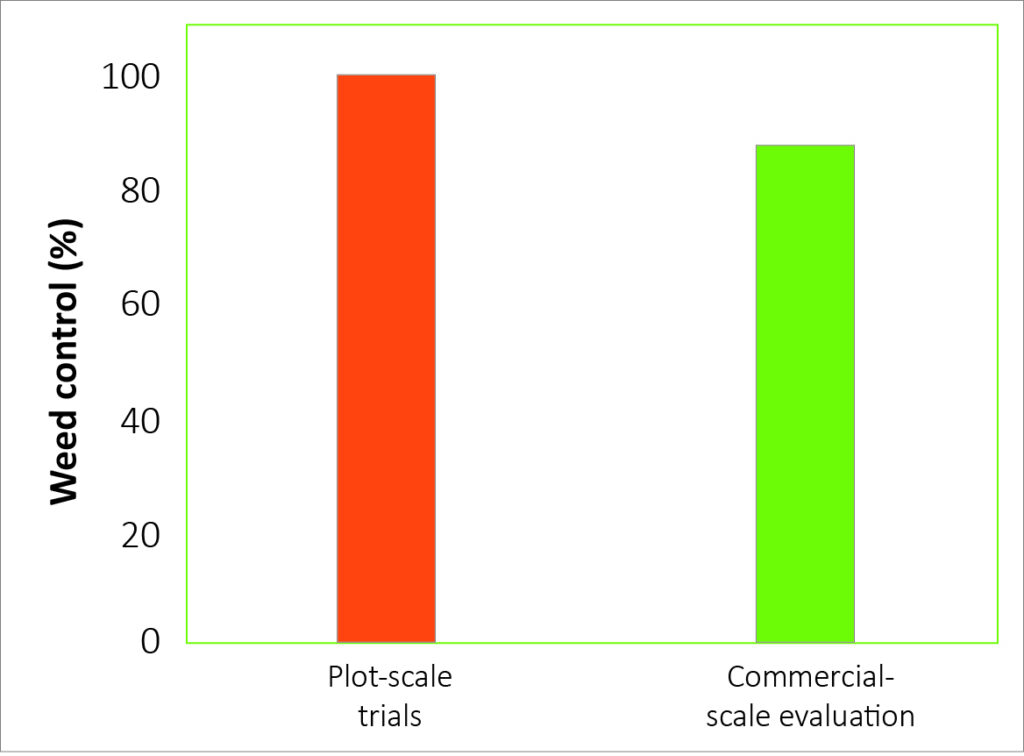 Any tactic that can consistently achieve 90 to 100 per cent weed control needs to be taken seriously.

This machine has the potential to revolutionise herbicide resistant weed management and help farmers keep weed numbers low. Field trials showed the implement is a highly effective way to manage key weed species, even when the plants are up to 70 cm in diameter.

The Weed Chipper is a non-chemical alternative to optical spraying. The physical upturning of weeds will reduce weed seed-set to potentially prevent or delay resistance evolution.

In very low weed density situations the Weed Chipper could replace the double-knock tactic completely, providing a single-pass weed control treatment that will reliably achieve around 90 per cent control.

The research undertaken in this project was made possible by the significant contributions of growers through both trial cooperation and the support of the GRDC, the authors would like to thank them for their continued support.