You are here: Australian Herbicide Resistance Initiative › Publications › 2020 › Are herbicide mixtures unaffected by resistance? A case study with Lolium rigidum 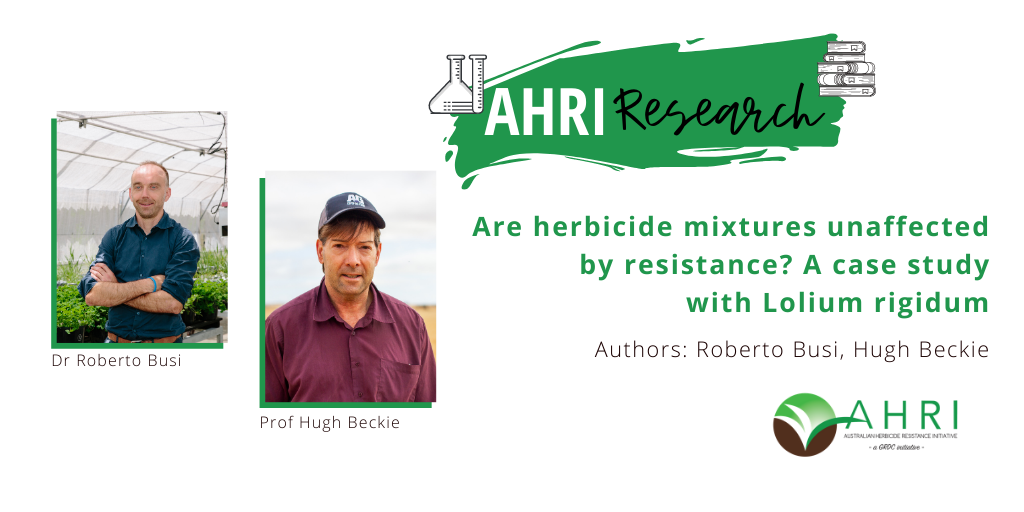 In contrast, the mean survival to the PRE treatments was only 2%, reflecting effective control of L. rigidum. Herbicide mixtures were the most effective treatments, with a significantly lower resistance frequency than stand-alone herbicides. For example, only 12% of the tested samples were resistant to the mixture of clethodim + butroxydim in comparison with 40% and 61% to either butroxydim or clethodim, respectively. Similarly, 8% of the samples were resistant to the mixture of trifluralin + prosulfocarb versus a m uch greater f requency of 36% a nd 51% resistance to prosulfocarb and trifluralin, respectively.

Surprisingly, the binary mixtures of trifluralin + triallate or pyroxasulfone + triallate are not affected by resistance (presently) due to the greater efficacy than that of either stand-alone herbicide. Thus, herbicide mixtures can delay the onset of resistance and mitigate the existing levels of herbicide resistance and cross-resistance in L. rigidum. Systematic screenings of a large number of field populations could identify the most (cost-) effective herbicide mixtures and foster their informed adoption on farm to mitigate the rapid evolution of weed resistance in lieu of expert assumptions or modelling simulations.

Diversity of α-tubulin transcripts in Lolium rigidum
Comparison of crop and weed height, for potential differentiation of weed patches at harvest